Fior Di Latte and Mozzarella: they are often talked about as if they were synonyms, therefore the same thing, in reality they are two different products both in terms of preparation and taste.

The law is not very clear about this and also for this reason there is a lot of confusion, especially when you have to choose what to buy in the grocery store. Let us therefore try to look at Fior Di Latte in detail and discover in any key differences from mozzarella.

A typical product of the dairy heritage of Southern Italy, the fior di latte is spheroidal in shape, weighing between 20 and 250 grams: it has no rind and is covered with a thin, smooth, shiny, milk-white film. The taste is slightly acidulous, the structure is fibrous and at the moment of cutting it releases a sort of milky liquid.

The fior di latte can be eaten as a second course, as an appetizer to accompany cold cuts (eg. prosciutto, mortadella, and salami) and of course can also be used as an ingredient in the preparation of different dishes, from the classic caprese (with tomatoes and basil) to “mozzarella in carrozza” (translated “in carriage”), but also as a condiment for other preparations such as pasta and most known on pizza.

The origins of “fior di latte” in any case are very ancient and must be placed between Molise, Abruzzo, and most importantly Campania, Apulia, even if the question of the real primacy of origin is still controversial. 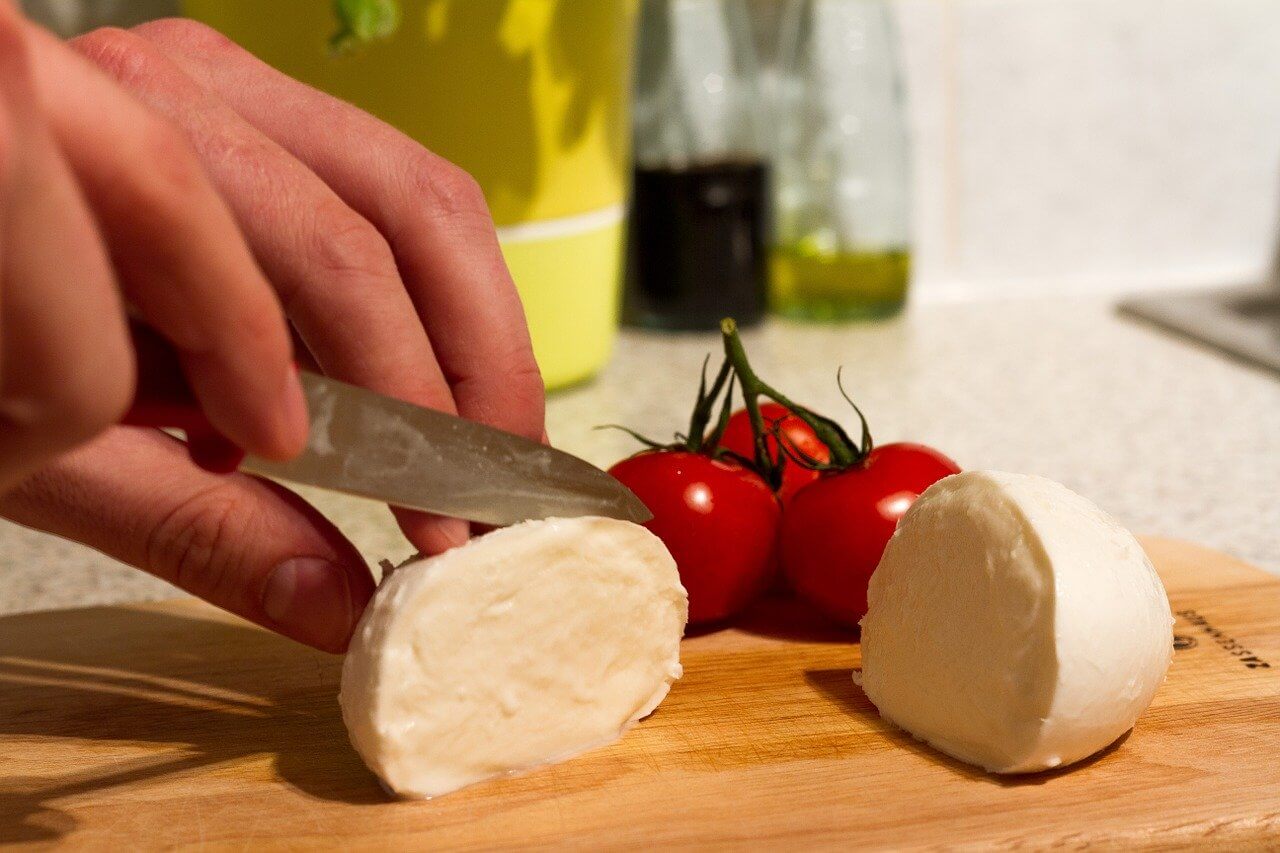 What differentiates mozzarella from fiordilatte is the raw material with which these dairy products are prepared: different types of milk.Mozzarella in the strictest sense is prepared with milk from buffalo milk from Campania, while fiordilatte uses only and exclusively whole cow’s milk.

The procedure and technique used for the production instead are practically the same, because both buffalo mozzarella and fiordilatte are fresh cheeses. The raw ingredient, however, is different.

The issue is almost trivial in its simplicity, but it is complicated by the fact that by now, in common language, it is often improperly referred to fiordilatte by simply calling it “mozzarella”

In this way, practically mozzarella and fiordilatte come to be the same thing and, when we refer to buffalo mozzarella, we must therefore specify it.

This confusion arises from the fact that – even if mozzarella was born in Campania, where it is usually made with buffalo milk – with the passage of time some producers have started to market mixed mozzarella (adding cow’s milk to buffalo milk) or prepared only with cow’s milk.

But the master cheese mongers rightly do not compromise: real mozzarella is prepared only with buffalo milk, while when the raw material is cow’s milk, then it is fiordilatte.

But let’s come to the substance: if we consider taste and consistency, what is the difference between mozzarella and fiordilatte? Are they easy to recognize on tasting?

They certainly are. Mozzarella has a full-bodied, acidic and savoury taste, very different from that of fiordilatte, which is sweeter and more delicate. Fiordilatte has in fact the typical taste of cream and milk and also has a softer texture than mozzarella.
Moreover, between the two dairy products the less fatty is fiordilatte, because cow’s milk contains less fat than buffalo milk. 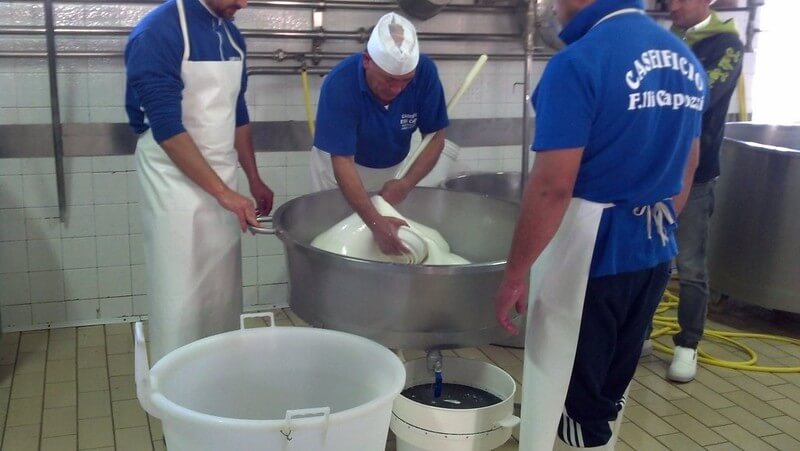 How is Fior Di Latte Made

The milk used for its preparation may be from the same milking or from several milkings, provided that they do not exceed 16 hours apart. To ensure freshness, the milk is delivered to the dairy within 24 hours of milking. The production system follows several stages.

Raw milk is brought to a temperature of 38 °C and whey is added from previously processed raw cow’s milk. At this point liquid calf rennet is added; it is left to coagulate for 20-40 minutes.

The curd is then reduced into big thin slices inside containers in which it is processed with the addition of almost boiling water.

After this process, the curd is then cut and spun either by hand or using special machinery. Finally, the pieces obtained are hardened by immersion in special containers filled with cold water, then they are salted by immersion in brine. 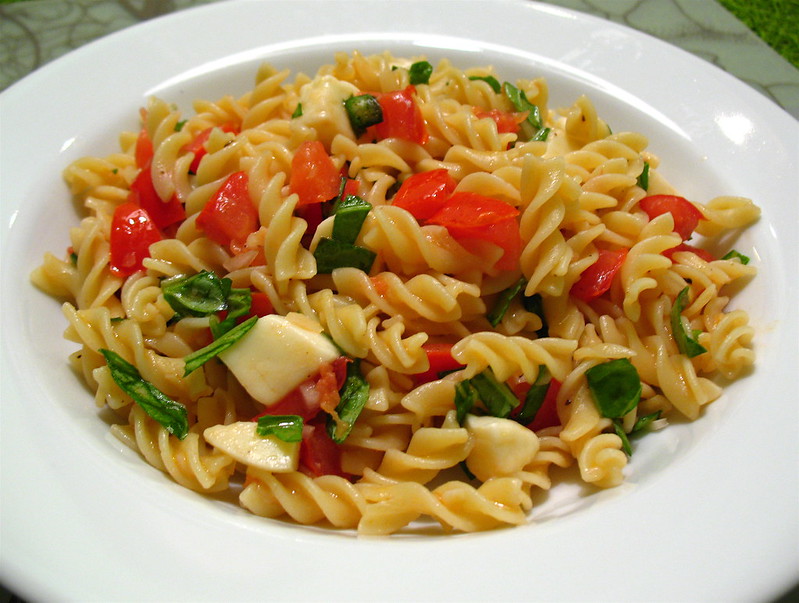 The dish known by the name of Capri Island is a classic dish that is prepared in the summer season, based on tomato and mozzarella. This very simple recipe can be reused to prepare new ones like we did: tomatoes and mozzarella with the addition of cold pasta. This recipe is ideal to serve both as a single dish and as a appetizer/happy hour on a buffet.

Place in a Bowl the tomatoes, olive oil, garlic, salt and pepper and mix through with a fork.

Break basil leaves with clean hands in half, add to the tomato sauce mixture.

Cut Mozzarella in diced size and (about a hazelnut size)

Boil a Pot of salted water, cook Fusilli (Rotini) al Dente!, when pasta is passed through the colander wait another 2/3 minutes for all the water to be released and also with the purpose of having a warm/cold dish instead of hot.

Mix the pasta with the tomatoes sauce prepared previously.

Add the diced Mozzarella only at the end in order not to let it melt.

One Thinly sliced anchovy and parmesan cheese can also be added as a more modern variation.

Any Fresh Wite Whine can be accompanied in general for any dish that is used with fresh mozzarella and also when is eaten alone as appetizer.

If Fusilli Pasta is not available Farfalle or Penne Rigate can be used instead.