Pepper Jack Cheese – How it’s made, Curiosities and Recipe. 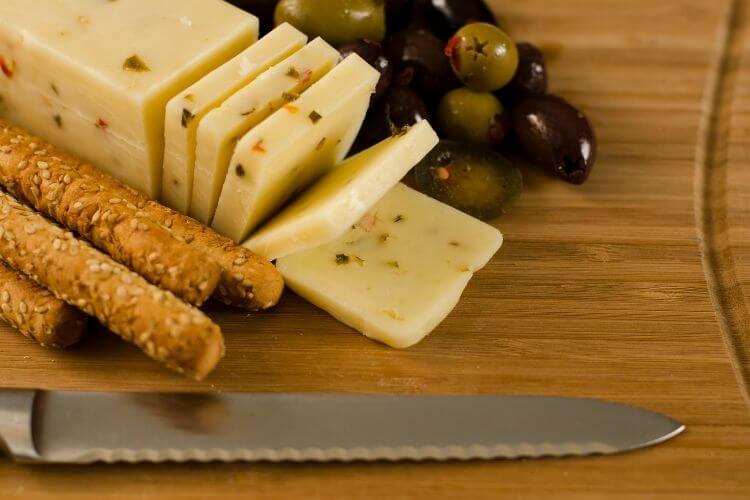 It’s very common to find cheese in anyone’s home because cheese happens to be a wonderful ingredient that has a way of transforming different recipes. You probably use very specific types of cheese in your home but there are so many different types of them out there that you haven’t tried yet. Today, we talk about Pepper Jack Cheese, its origin, how it’s made and even how this particular cheese is eaten. Read on!

Pepper Jack cheese is derived from Monterey jack Cheese which is an original type of American cheese that was invented by Mexican Franciscan friars of the Monterey area in California. As the name Pepper Jack suggests, this kind of cheese is highly flavored with rich peppers, some rosemary, garlic, habanero chilies and to give it that extra kick, some jalapenos are also added.

This American semi-hard and white cheese is made using cow milk to give it a mild flavor that has some slight sweetness although it’s mostly spicy and leaves you with a buttery taste in your mouth. 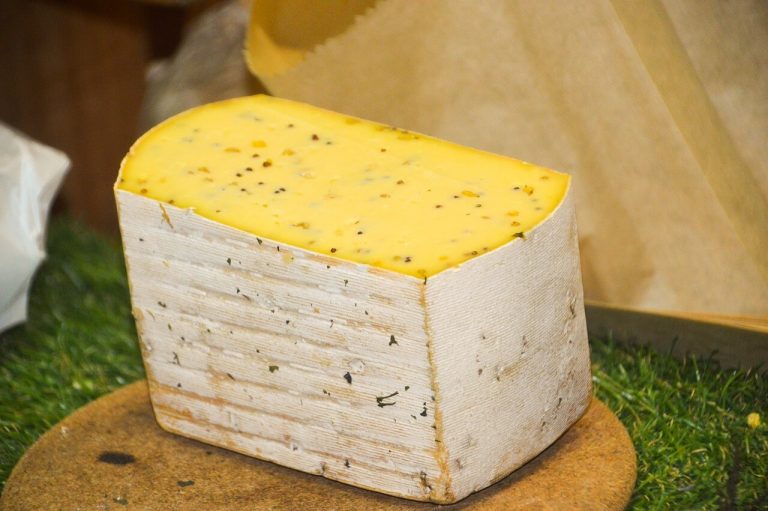 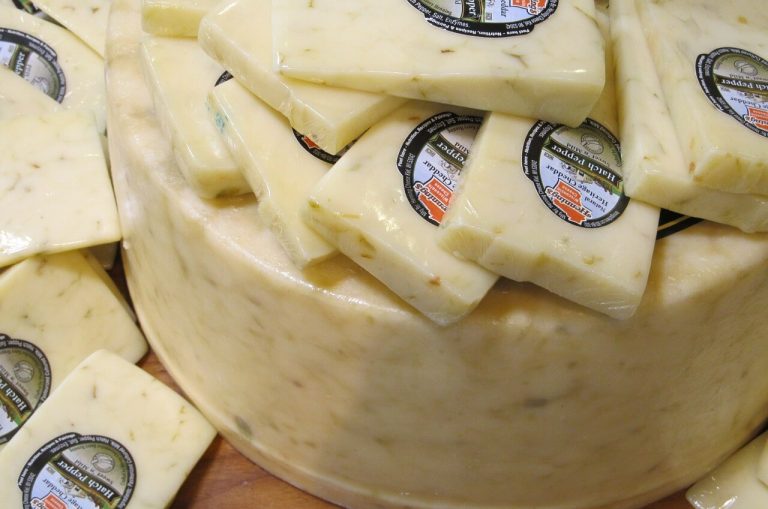 It goes without saying that in the process of preparing Pepper Jack cheese, you might end up overdoing the spicy factor depending on the peppers that you have. To avoid this, it’s advisable to start low. This is because it would be terrible to prepare cheese, wait for a couple of months for it to age only to realize that it turned out too spicy for eating.

Start by heating and acidifying the milk

Heat your milk to 88F which is about 31.5 Celsius by placing it in a pot or in a sink containing very warm water. If you’re using a pot ensure you heat the milk very slowly and as it heats, stir it well.

Once the milk gets to 88F you can add the culture in. Start by sprinkling the powder over the milk surface then give it some time, about two minutes so that the powder gets rehydrated in order to prevent it from caking and so that it does not sink in clumps.

Maintain the warm temperature until you’re instructed in the guidelines to increase it. The more you do this, the more consistent your cheese will be.

After you’ve stirred the culture properly, for an hour, hold the milk with the culture still until the culture starts to work. This rest is referred to as the milk ripening stage. It will initially be a slow process but the speed will increase as you go on when the lactose starts getting converted into lactic acid.

During this milk ripening phase, you have the chance to ensure the draining materials and molds are properly sanitized. 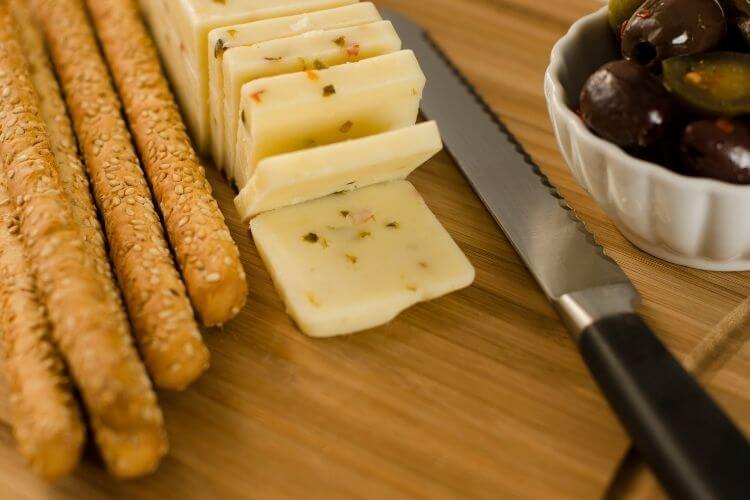 Get to prepare the pepper

When preparing cheese with 2 gallons of milk, take between 1 to 1.5tsp of black peppercorns. They should be fresh and of high quality. Toast them for a while to the point where they pop inside the pan. This way, they’ll start bringing out the oils and great flavors.

Grab a pestle and mortar and lightly crack them. The peppercorns should add a nutty or citrusy flavor while the cheese draws heat from the pepper. It should also give it an aromatic flavor.

For this, you are required to use 0.75 to 1.25tsp of flaked pepper. You can also use jalapenos and for this you are required to wait until they turn red. After this, smoke them slowly with applewood. They’re usually perfect for making cheese since they’re e hot, sweet and smoky.

For this, about a third to three quarters of a single pepper is suitable. If you’d like to use either red hot or green pepper, blanch them first so that you don’t have any bacteria developing inside your cheese especially if it’s the deadly kind of bacteria. You also have the option of using the pepper with or without seeds. Make sure you chop the pepper into small flakes to facilitate faster distribution into your cheese.

Get the single strength rennet (liquid) and add about ¼ of it to the milk. Let it sit for about 45 minutes for the culture to work. The rennet coagulates the curd. It takes about fifteen minutes for the curd to start thickening but you have to allow it to do so in the 45 minutes so that it’s firm enough for this kind of cheese that you’re preparing.

The milk should stay warm during this process but It’s fine if you notice the temperature dropping a bit. Once the curd is ready, the edges should show some clean breaks and the rising whey shouldn’t be cloudy or too clear either.

Cut the curd and stir it

Once the curd is good enough, start separating the solids and the liquids. Cut it vertically in a checkerboard pattern for the cheese then allow it to rest for three to five minutes until the whey starts rising and floods the surface. This ensures the fresh cut surfaces become firm enough making them more resistant to breakage when you start making the horizontal cuts into the curd.

Using either a spoon or ladle start making the horizontal cuts. Make sure the final curds are about a half an inch in the end. Allow them to settle for about three to five inches so that they’re firm enough then start stirring gently from bottom to the top so that the curds remain moving and stay separated.

Keep in mind that at this moment they are fragile. As they keep moving in the warm whey, set the temperature back to 88F in case there’s a temperature drop and keep stirring for another ten minutes.

It’s time to start drying the curd and to do this, slowly increase the heat over the next thirty minutes to a temperature of 95F. Slowly increase the heat at 3F every five minutes at the start then keep cooking for the next thirty minutes to an hour. Total time taken for the heating and cooking should be between 60 to 90 minutes, using 90 if the curds are still soft.

The final curds should be well cooked through with enough moisture removed. The broken curds should be firm and have moderate resistance when you press after which you should allow them to settle under whey.

Remove about forty percent of the whey volume leaving just about an inch of the whey to cover the curds. Start washing the curd in cold water. Add the water slowly until the curd is stable at about 75F. Ensure the water is free from any bad bacteria.

Form the curd, salt and add the pepper

Transfer the dry curd to the colander so that it drains for a few minutes as you stir. After draining, add salt while the curds are in the colander in two to three doses and then stir properly until it’s well absorbed by the curd. Add the pepper directly if you’re making one single cheese, stir and transfer to the molds that are cloth lined. If you’re making two cheeses, separate into the molds first then add the pepper into the cheese.

Get a press cloth, smoothen then fold it since the cheese is ready for pressing. Start lightly then increase the press weight moderately. For every six inches of cheese mold press eight pounds of pressure for fifteen minutes, twenty pounds for two hours and forty pounds for four hours.

Try keeping the cheeses warm between 70 to 75F. Throughout the process, unwrap, turn and rewrap at intervals for even consolidation.

Allow the cheese surface to dry for a few days after which you can wax and age it. You can place it in your aging space at a temperature of 52 to 56F and keep the moisture at 80 to 85%. Age it for two to three months although you can age it even longer. 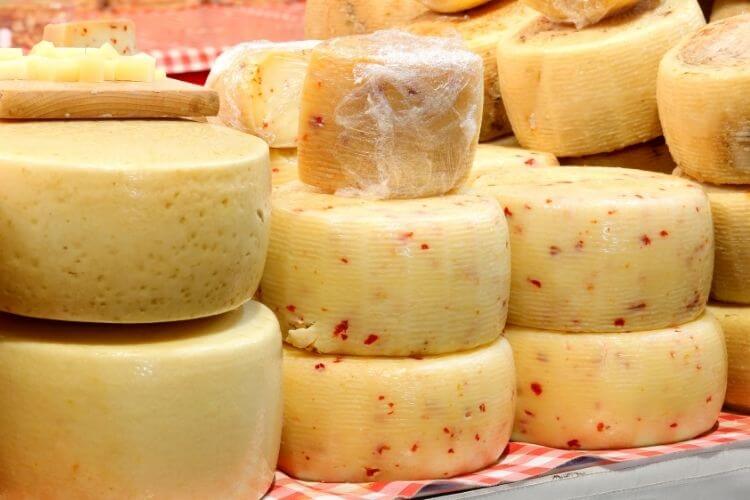 Pepper Jack Cheese melts so well and while this kind of cheese can be eaten on its own, people who love it often choose to eat it with some quesadillas or crackers. It can also be added to hamburgers. This kind of cheese also goes well with grapes, olives, pickled vegetables, jalapeno peppers or melons.

You can also stuff it into a chicken breast or even wrap it with bacon to enjoy that great explosion of flavor.

If you’re a lover of cheese and are particularly keen on extra flavor then this Pepper Jack type of cheese is the most ideal for you. It leaves your mouth with a delightful kick and the addition of jalapenos gives it an even sharper taste. So get your water bath or double boiler ready and start the process of making this delightful cheese!

1 thought on “Pepper Jack Cheese – How it’s made, Curiosities and Recipe.”