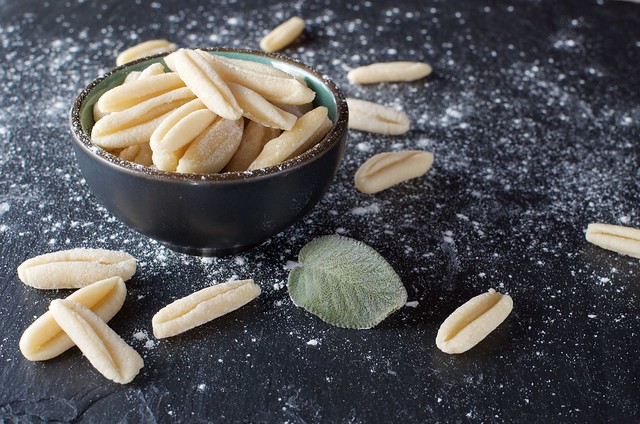 Cavatelli are elongated and concave shaped gnocchi that have been part of the culinary heritage of Molise and Apulia Region in Southern Italy for centuries.

The skilful hand processing is the real distinctive feature of this pasta format: with dedication, skill and patience, the Italian housewives knead the flour and water (the quantity absorbed by the semolina) until they obtain a dough with a smooth and elastic consistency, which will not risk breaking during cooking.

Then they divide it into many parts, giving each one the shape of a small tube, from which they obtain many smaller pieces, about two centimetres long. At this point, each piece of dough is dragged and “hollowed out” – hence the name “cavatelli” (which in Italian means exactly that) on the pastry board with the tip of the index and middle finger and is ready to meet the most different seasonings. 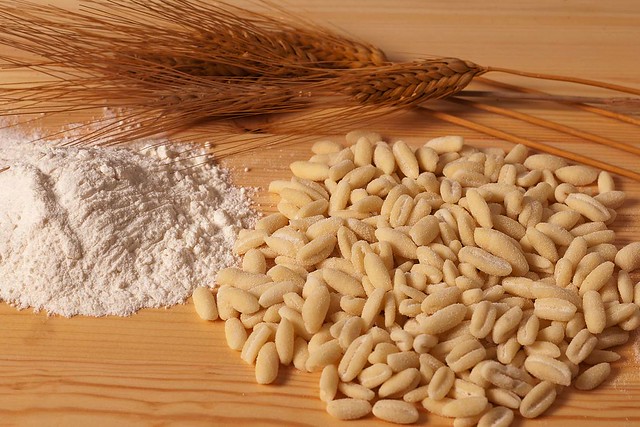 The origin is very ancient and basically peasant, but in 1200 the cavatelli were “discovered” by the cooks of the noble families who accompanied them with lamb or pork chops, sausages and tomato or seasoned with a sauce made with bacon, peas and broad beans.

They were made it the main dish of banquets and important occasions of aristocrats and landowners of the time and for this reason since then cavatelli have no longer been considered a poor cuisine preparation, but the Sunday dish excellence of the localities of Southern Italy where it is traditional to eat it also on the occasion of the various festivities of the year.

Frederick of Naples was fond of them and legend has it that the cavatelli were invented under his reign. They were the main course of dinners and banquets, cooked with broad beans, bacon and peas. Surely they were also served at the historic “Colloquium General”, the meeting of all royal officials and dignitaries held in Foggia Apulia on 8 April 1240. 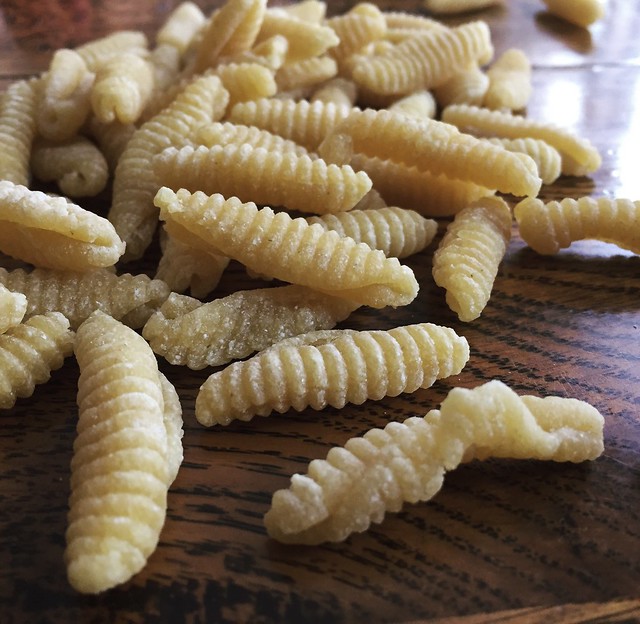 Even if it is possible to buy ready-made cavatelli in the fresh pasta shops in niche markets, I have to say that homemade cavatelli are a whole different thing compared to those produced industrially or in any case with the use of electrical machinery.

It is possible to prepare them in an artisan way both by hand and with the help of a handy pasta machine and, even if a friend of mine from Apulia claims that the real cavatelli are exclusively those made with dedication, I find that those that can be obtained with the help of the specific machine are equally delicious, so that I have not found a substantial difference in flavor and texture with those made by hand.

In any case, just to be able to provide you with both procedures in this post, I handmade the cavatelli several times, revealing the tricks to make it succeed at best.

The cavatelli pasta, containing durum wheat semolina, has a particularly compact taste and, if you want to give it a softer texture, you can use half flour 00 and half flour 0 for the dough, a mixture also indicated if you want to dry them later.

I used the term “about” to indicate the amount of lukewarm water needed to prepare the dough of cavatelli because it depends on the absorption capacity of the flour you use and precisely because of this fact it may take more or less: adjust it at the moment, adding water a little at a time.

Having said this, let’s come to the procedure. 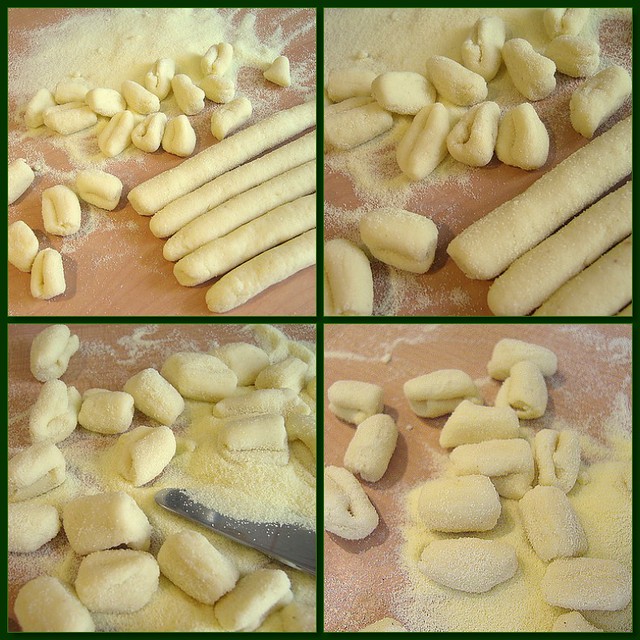 How To Cook Cavatelli

You can cook the cavatelli immediately after making them, but I advise you to let them rest for at least 2 hours on the floured tray at room temperature or in the fridge if it is hot so that they remain well firm during cooking.

The cavatelli are boiled like fresh pasta in plenty of salted water, boiling them for 7-8 minutes, checking their cooking and tasting them to see when they have reached the point of your taste before draining them and seasoning them.

Keep in mind that as they dry out they take longer and longer to cook and for this reason it is essential to keep an eye on them in order to obtain the best results for the dishes in which you will use them.

You can keep the cavatelli in the refrigerator for no longer than 3 days, but you can also freeze them, as you do with gnocchi, putting them well separated on a flat tray in the freezer for about thirty minutes to prevent them from sticking together and then storing them in the freezer in the plastic bags for a maximum of 90 days.

If you prefer to dry them, I suggest you put them in the sun or use a household dryer, but if the weather is bad and you don’t have the appliance, put them on a special frame in a dry and ventilated place, turning them from time to time so that they can lose moisture on both sides.

Once they are dry, keep them closed in bread paper bags or in hermetically sealed plastic or glass containers for no longer than 2-3 weeks, as, like all short fresh pasta, even cavatelli dried for longer may cook unevenly and remain raw inside.

As far as the seasoning is concerned, it can vary from the classic meat sauce, both white and red, to sauces of tomato, vegetables and spices, to meat and fish sauces.

Among the meats, one of the most used is that of wild boar (very tasty and popular in Italy), or the mixed chopped beef, to be heated on a bed of golden onions in olive oil; also excellent a condiment made with sausage and stewed broccoli, with a drizzle of raw oil, garlic and pecorino cheese.

The sausage to season the cavatelli can also be mixed with a little red pumpkin; alternatively you can put on the cavatelli a couple of ladles of sauce all’arrabbiata, to be made instantly, with garlic, oil, chilli pepper, tomato puree and pieces of date. Another perfect solution is the sauce that is usually used to season orecchiette.

2 thoughts on “Cavatelli – The “Gnocchi” From Southern Italy. [Homemade Recipe]”