Colby Jack Cheese – Origin, How is made and Nutrition. 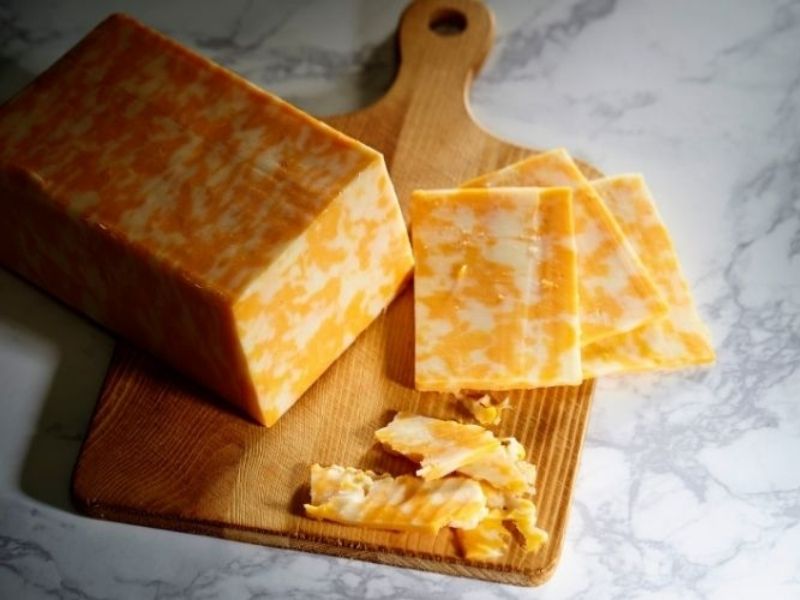 Colby Jack Cheese is a classic American-style cheese. These cheeses are a refined and concentrated type that became quite common in the early 1900s. It is incredibly different from traditional cheeses and so, was tagged ‘American Cheese’ by federal law.

Other American-type cheeses are American slices (Pasteurized cheese). It is a concentrated cheese made by blending two or more cheeses such as cheddar cheese, Colby cheese, granular cheese and other similar cheeses. It has an excellent melting capacity, a smooth feel and a salty flavor. It is usually yellow or white in color and is mostly in packaged in slices or chunks.

>> Drinking This Japanese Tonic Before 10am Gave Me Astonishing Results <<

What is Colby Jack Cheese

This cheese is a blend of two mellowed cheeses; Colby cheese and Monterey Jack cheese. It is a fine and semi-soft American cheese made from pasteurized milk. It is made from one of the best technique or recipe of American cheeses. It gathers the finest chunk of the Colby cheese and Monterey Jack cheese, blends them together and serves a sweetened and mellowed Colby Jack Cheese.

It is a distinct blend of similar but uniquely different cheese flavors otherwise referred to as Co-jack. It is uniquely mild and slightly sweet. It could also be quite buttery and milky. The cheese appears quite appealing in a marbled mix of orange and white color. It melts and blends well with other cheeses.

Although the Colby Jack cheese is originally American, it is also popular amongst Mexican dishes. It is an all-purpose food and serves as an addition to quite a number of diets. Unlike several other types of cheese, this cheese is moist, softer and melts smoothly. 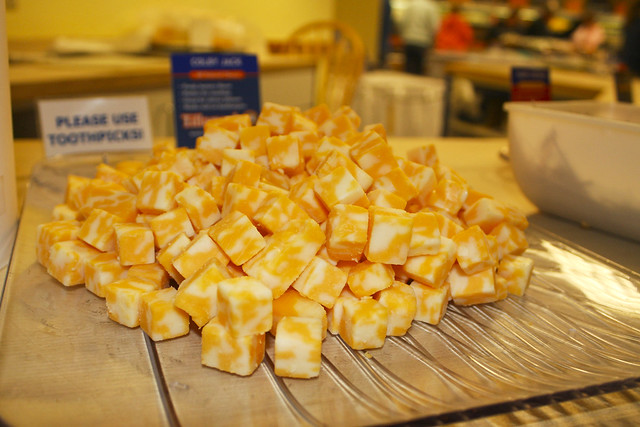 The Colby Jack Cheese was invented and specifically put together in 1885 by Joseph F. Steinwand in a cheese factory situated in the heart of Wisconsin, Colby, hence its name. It was the first established factory producing cheese in Colby and was founded three years before the conception.

It was a simple, small wooden building that supplied about 57kg of cheese each day. The town, since then is regarded as the home of Colby cheese especially after the erection of a signpost that plainly described the town’s link to the cheese.

Although the factory stopped production, the cheese continued to thrive as production began to spread in and out of the town, reaching a wide range of consumers. To keep alive the memory of the cheese and town, a yearly festival during which all local food stalls offer free Colby Jack cheese was fixed for mid-July.

Traditionally, the cheese was a blend of the Colby cheese and the Monterey Jack cheese pressed into a 13 pound longhorn shape horns before being waxed and sold.

How is Colby Jack Cheese Made

The cheese is made originally from pristine milk held at a particular time-temperature combination. This is in order to deliberately eliminate the pathogen and microorganisms in the edibles. Colby Jack Cheese is a tender mix of Colby cheese and Monterey Jack cheese after which is often pressed into circular or semicircular shapes.

Originally, the cheese had a fixed recipe and were only made in longhorn shapes (long and cylindrical) but in recent times, modern methods and recipes have been discovered. These procedures have been simplified and modernized.

In attempt to produce and supply a wide range of cheese feel, flavor and colors, cheesemakers now apply diverse proportions and different aging processes in arriving at the fundamental formula. In fact, it now comes in rectangles, semicircles, circles, and so on, based on preference. Like several other sorts of cheese, it takes over one US gallon of milk to produce a single pound of Colby Jack cheese.

In the beginning, the milk is warmed up. After heating the milk, adding a relative quantity of rennet and shredding the curds, the solid form of the milk is separated from the whey. The mash is then heated the second time in other to squeeze out as much whey as possible. After which they are then washed in cold water basically to leash out and reduce the lactose to a level that permits lactic acid development.

Although, the water is squeezed out, the cheddaring process is skipped. At this point, the curd is seasoned for flavor and preservative effects then immediately pressed into desired forms. The cheese can then be placed into an aging space at about 52-56°F and 80-85% moisture or as deemed fit.

This process creates and characterizes the mild flavor in the cheese different from several others which end up crispy and tart after cheddaring. Monterey Jack cheese which follows virtually the same procedures with the exclusion of annatto seasoning, is then melted together with the Colby cheese. 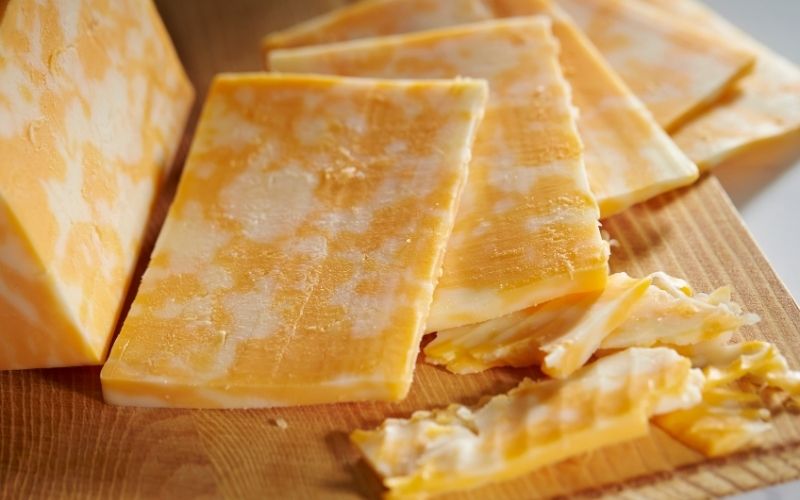 These are two identical but yet different kinds of cheese. Remarkably, both the Colby and the cheddar can be paired with Monterey Jack cheese although the blend is usually a Colby and Monterey Jack mix. A lot of people find it difficult identifying a Colby cheese separate from a cheddar.

They look alike but do not go through the same procedures. Cheddar unlike, the Colby Jack cheese is processed by cheddaring. Cheddaring is basically a step-by-step process of adjusting the acid contents in cheese. It involves stacking loaves of curd on top of another in order to reduce and squeeze additional whey out of the loaves below. It then results in a denser and sometimes crumbly texture.

In the actual sense, differentiating between these cheeses could be somewhat tricky. A striking difference however, is that the mix turns out more moist compared to cheddar because the cheese holds back more whey as a result (since the CJC does not go through the cheddaring process).

Also, The cheddar is usually white except deliberately dyed. Because of the element of annatto in Colby, it is dyed orange color as against the white cheddar.

Typically, cheeses are aged in order to break down the milk fat into fatty and amino acids thereby, intensifing the flavor. The mild CJ Cheese is aged for 2 to 3 months while the cheddar is aged for a longer period of time ranging from about 12 to 16 months. The sharp and tart feel of the cheddar is the resulting effect of a longer aging period. Extremely sharp cheddar cheeses are often aged for two or more years.

As a matter of fact, the CJC and the cheddar serve distinct purposes and satisfies varying preferences because of the significant difference between the two. For example, while grilling sandwiches, Colby does it better because although both are good melting cheeses.

Also, while the cheddar varies in forms and shapes ranging from rectangles to square blocks, Colby Jack usually appears in a cylindrical form and turns semicircle after cutting.

Summarily, although a great alternative, cheddar is sharp and tangy while the CJ Cheese taste milder and creamier specifically because the cheddaring process is exempted. Despite the resemblance, the Colby Jack cheese is in no regard, a replica of the European cheese neither is it a young cheddar. 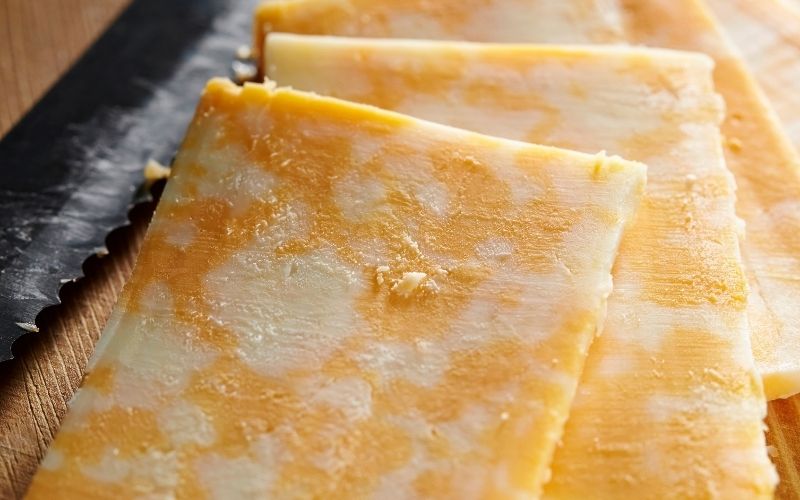 Cheese, as it is, plays a significant part in almost every meal all round the world. The Colby Jack cheese is literally, a versatile blend. It sufficiently meets the nutritional needs of quite a number of people ranging from various age groups.

It is a major source of nutrients particularly important to help build and maintain healthy body systems. It contains calcium, protein, phosphorus, sodium and several nutrients.

There are 109 calories in 1 slice of Colby Jack Cheese. In the same portion, it contains high amounts of vitamins A and B-12, along with zinc, fat, and riboflavin. In short, cheese is a healthy and delicious source of many nutrients.

This cheese, because of its superior melting quality, is often used on grilled sandwiches, cooked vegetables and other warm dishes. It is an ideal choice for nachos and casseroles.

The mellowed and slightly sweet flavor of the cheese fuses well with sauces, beef, steak, soups, omelettes, hamburgers, bagel, spuds, greens and fruits like apples and pears. It forms part of countless recipes for breakfast, lunch, dinner, snacks and dessert. It is indeed a thoughtful way to add nutrition to one’s diet. 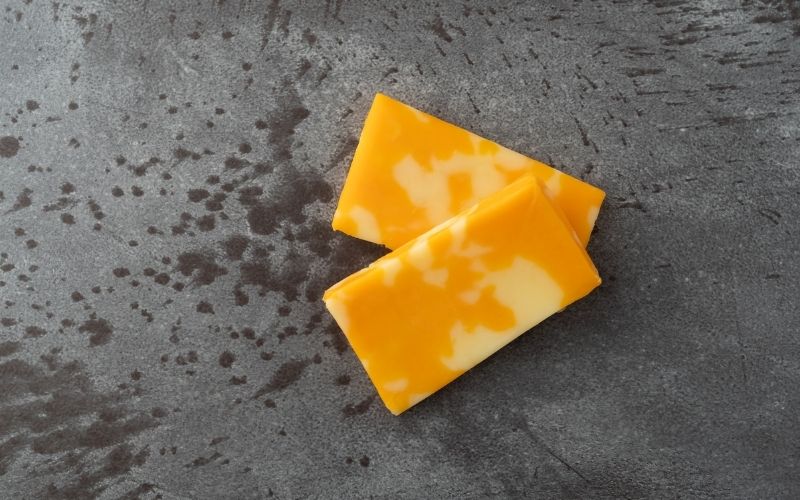 A perfect time to appreciate this amazing food is when hosting a gathering or planning a family event with loved ones such as thanksgiving, holiday, guests dinners,  etc.

This cheese can also be accompanied for appetizers or tasting plates particularly with almonds, walnuts, hazelnuts, raisins, pear and apples aswell.

Don’t forget that it suits greatly a beef burger, melted on top of some crispy bacon!

A fascinating truth about the Colby Jack cheese is that every region has its own method and style of making cheese but there is an inherent wholesomeness to the CJ Cheese that no other type of cheese can take its place. It never stops being delicious.

Pepper Jack Cheese – How it’s made, Curiosities and Recipe.

1 thought on “Colby Jack Cheese – Origin, How is made and Nutrition.”