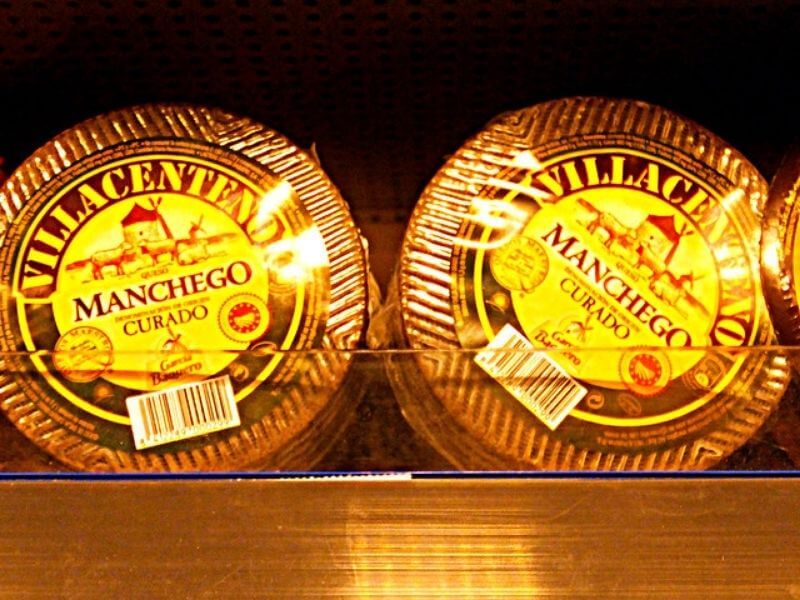 Spanish cuisine, like that of other Mediterranean countries, is a cuisine rich in history and traditions that uses the ingredients of the Mediterranean diet, famous throughout the world for being a healthy diet. The strength of the Mediterranean diet lies in the great variety of ingredients (meat, vegetables, fish, legumes, dairy products), authenticity and freshness. Cheeses are an integral part of this diet and it is precisely in Spain that a high quality cheese is produced. Spain is mostly famous for tortillas, gazpacho, paella, wine, but in reality, there are many other little gastronomic treasures, less famous and advertised, but always of the highest quality and often unique in the world. This is the case of the Manchego Cheese (in Spanish “Queso manchego”). In 1606, Manchego was mentioned in many books including “El Ingenioso Hidalgo Don Quijote de la Mancha”, (by Miguel de Cervantes), and in the Diccionario General de la cocina or General Dictionary of Cuisine in1892.

Today, the image of Don Quijote is more modern while riding his bolso horse and nearby his faithful squire, Sancho Panza. It is the same logo as the Consortium for the Protection of Queso Manchego. In 1996, this cheese landed in Europe making it an important source for the cheese.

Queso Manchego is considered one of the most popular cheeses in the world. It originated in La Mancha which is a large region just south of Madrid. Among other things, it’s known for its very hot summers when temperatures can reach 50° Celsius and was named after the surrounding area. For a very long time, this cheese has been an attitude of life for the people in the region.

The downside, this area is not conducive for cheese production due to the hot summer temperatures and extreme arid climate. At one time, the Arabs renamed the area to “Al Mansha” which means land without water. Needless to say, the Spanish changed the name to Mancha. 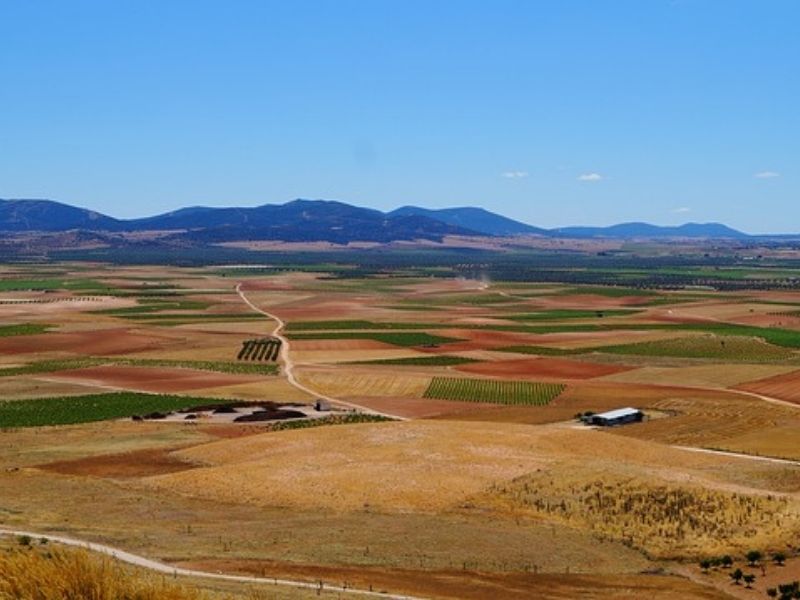 What is Manchego Cheese and How is made

Manchego Cheese is made from Sheep Milk, precisely from the Sheep Breed “Oveja Manchega“. The Oveja Manchega sheep is a rustic animal that is perfectly suited for turning animal food into really nice milk. These sheep are a productive breed and the entire feeding process is strictly controlled.

To date, the region has installed numerous irrigation systems and the entire cheese production is monitored and protected by the Regulatory Council for the PDO of Queso Manchego.

The Regulatory Council is in place to ensure everything is carried out for quality standards and within the established geographical area. The geographical area where the cheese is produced is the provinces of Cuenca, Albacete, Ciudad Real, and Toledo.

The milk is collected from two or more Oveja Manchega milkings, arrives at the dairy at a controlled temperature of 4°,  and then pasteurized.

Processing starts with the whey starter culture and rennet, then everything is brought to a temperature of 28 to 32 degrees for 45 to 60 minutes.

Once the curd is formed, it is broken and the curd is constantly stirred to reach a temperature of 40°. Then it’s extracted into plastic bands with the characteristic zig-zag striation of the manchego in relief.

The forms are pressed and salted in brine or dried for the more traditional, non-mechanized approach. The cheese rind is quite hard and white or ivory in color. The paste can become grainy as it matures at which time it’s the color of straw.

It’s then formed into cylindrical shapes approximately 22 cm in diameter and 12 cm in height. 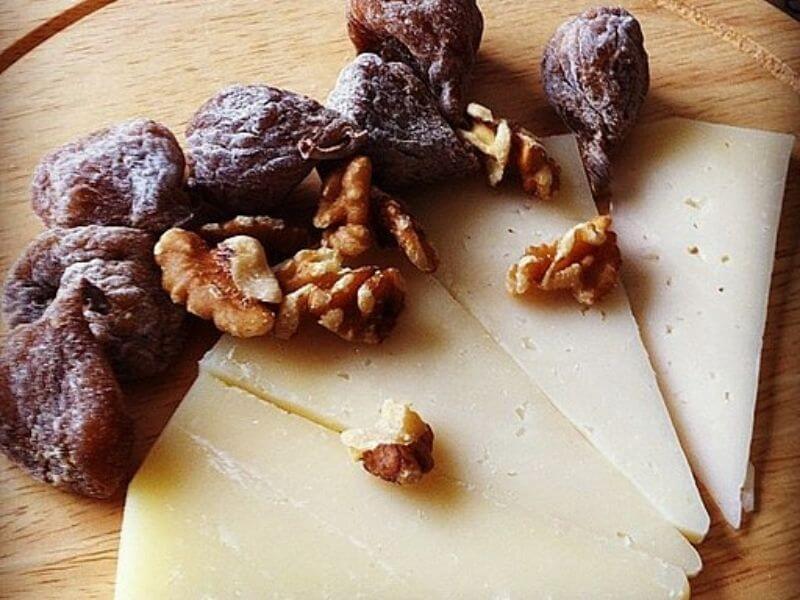 Manchego cheese is solid with a strong, full-bodied flavor and an acerbic tone. If left as is, over time it will become slightly spicy. Manchego is aged for a minimum of 30 to 60 days and never longer than 2 years. If the cheese is aged longer, it will be more grainy, less pliant, and slightly spicy in texture.

If the cheese is more than 360 days old, it will be marked  “Manchego dop Curado” or aged. Manchego cheese won first place in the World Cheese Awards in the 2015 competition. It was chosen over 2700 kinds of cheese in competition from 30 countries.

Paraphrasing the judges, they said Manchego is light and has an intensity. It’s an extraordinary cheese that is light but with high notes like a choral chant. It also has a long and surprising aromatic finish. 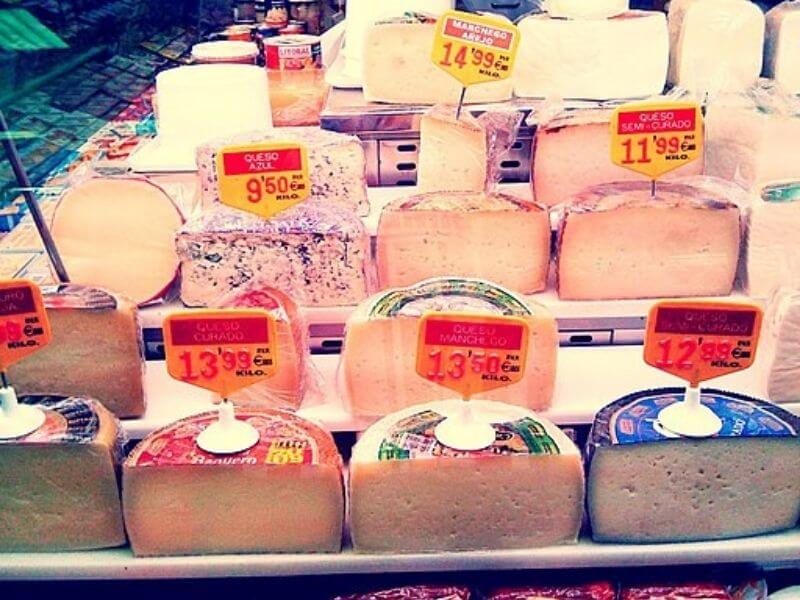 Spanish dishes have many recipes using and embellishing the taste of this splendid cheese. It is used in many forms depending on the level of its seasoning.

In order to really appreciate the qualities of this cheese, there are a few things you should consider before serving. Most connoisseurs believe it should be eaten at room temperature but temperatures are not always the same so the best advice is to establish a reference temperature.

The perfect temperature for Manchego cheese should sit between 16° and 18°. The size of the pieces of cheese does not have to be large. Just take a small piece, place it in your mouth and experience the incredible flavors that are released from Manchego.

You can cut the cheese in small squares for an aperitif or thin triangles for sandwiches or on toast. This cheese is so versatile it makes a great dessert. It’s commonplace to find this cheese on dessert menus in France. In Spain, if you look around, you will find it on their menus. In many places, after a meal, people will enjoy a slice of Manchego cheese.

In many cases, wine and cheese are considered the perfect combination. That said, there are people who believe if you are at a wine tasting, you do not want it accompanied by cheese. They believe if you eat cheese before tasting the wine, your sense of taste will be diminished, masking all the wonderful flavors from the wine.

Manchego cheese works beautifully with wines with full body and age. Wines from Rioja, Ribeirao, and Priorat are some excellent examples. Soft or sim-hard cheeses can be enjoyed with young red, white, or pink wines.

Syrah, Cabernet Sauvignon, and Zinfandel are excellent, affordable, and widely popular wine choices for this cheese. A good option could be pairing with Fino or Manzanilla.

Beer is another great choice for improving the taste of cheese. Beer is fruity, floral, and is made from yeast. Cheese can also be combined with nuts. Eating nuts in between cheese will help to clean your mouth and not mix the flavors. Good examples are walnuts and hazelnuts along with pistachios and almonds. Dried raisins, dates, and figs will definitely improve the taste of cheese.

A toasted slice of bread with extra virgin olive oil along with Manchego cheese is a great taste. Enjoy a cheese sandwich for breakfast or an afternoon snack are great choices. 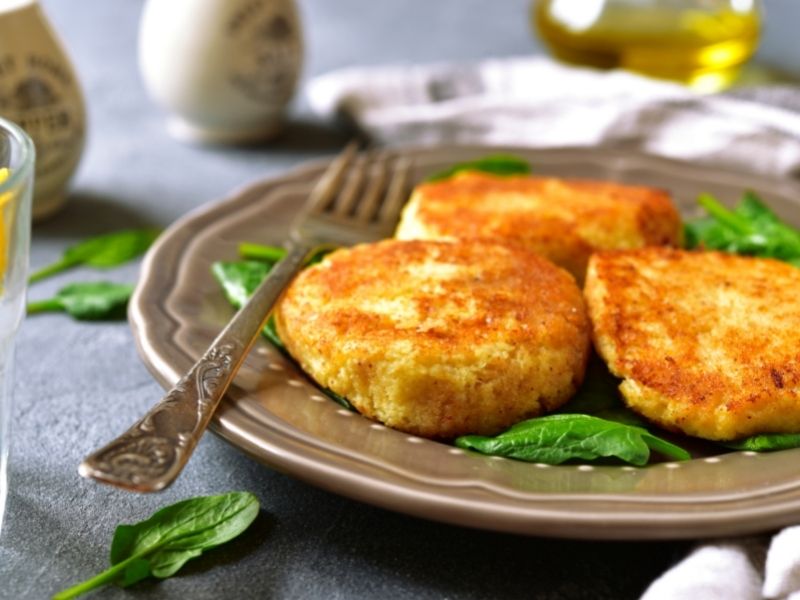 2 lemons, zested, then cut into wedges to serve

Canola or Sunflowers oil, for frying

3 whole roasted peppers, from a jar

Popular Articles About Great Cheeses from around the World

Colby Jack Cheese – Origin, How is made and Nutrition.