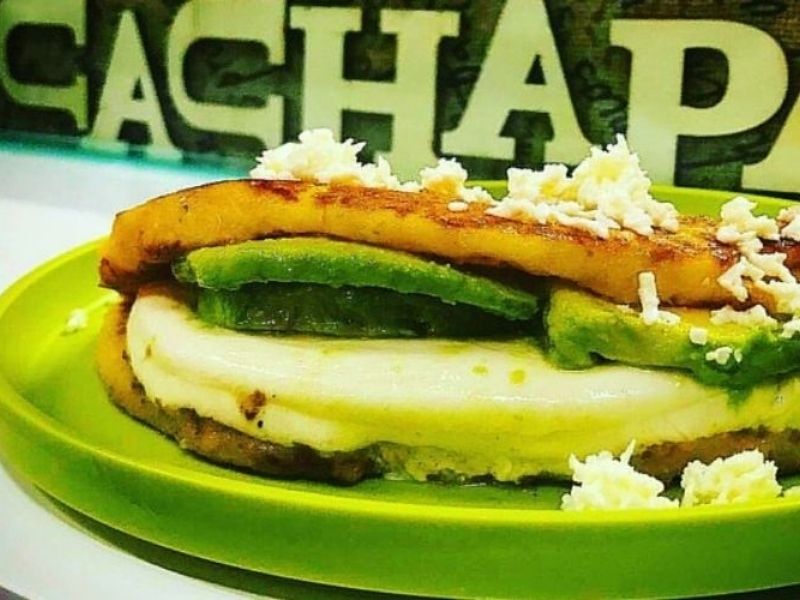 Cachapa is a Venezuelan street dish similar to the pancakes of North America, although instead of flour, it is made from freshly ground corn. Now a famous dish (appetizer, party snack and main meal), the Venezuelan corn pancake has become an adopted delicacy among food lovers across several countries.

Nowadays, the Venezuela corn which has been processed into a flour mix is prepared into cachapas, refrigerated and sold in markets for ready use, although homemade cachapas are still preferred. The corn pancake is loved for its variations on fillings it goes with, and is often mistaken for its near family Arepas.

We will be clarifying this, as we get into the true origin of Cachapa, similar dishes it is often confused for, how best to prepare it and the different flavors you have to try your Cachapa with. 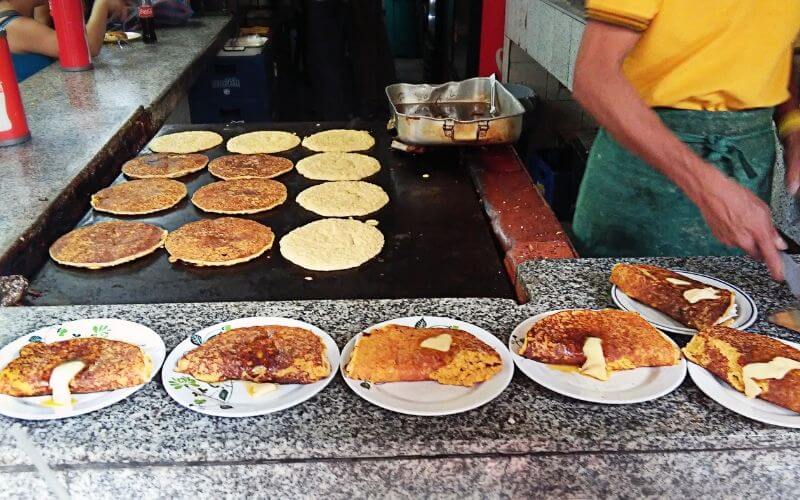 Although Cachapa is a widely popular delicacy in Colombia, the dish is said to have originated from Venezuela, long ago during the pre-Columbian period.

During this period indigenes from the central region of Venezuela, would ground their native corn with stone pestles, mix the ground corn with water, and milk and then heat it on “budares” made of clay to have thick yellow flat cakes (Cachapa) which represented the flour of pancakes.

It is noted that back then, the addition of salt and sugar was not a known part of the Cachapas recipe, although the basic fundamentals involved remain the same as they have been known.

Hence, modern-day Cachaperias (cachapas restaurants) still keep the recipe short (ground corn with milk, salt, water and sugar), but with some modifications such as the assorted fillings like the roasted pork, queso de mano (cheese cream) and even telita cheese.

It is not clear who started the cachapa delicacy, however, the existence and cultivation of the corn are said to have existed since the three great civilizations of central and South America (the Maya, Inca and Aztecs).

For others, the dish dates down to early Venezuelans – the Yanomamo, Arawaks and Parias. The three civilization periods are between 500 to 1,800 years ago, accounting for the development of farming practices across different land terrains. This ensured the farmers could grow crops, maize inclusive on mountainsides, in tropical climates and with advanced irrigation practices.

For the indigenes, grinding their maize kernels, and preparing it with milk and water before heating on flat griddles made their day. So much that, the dish became revered and attached to religious practices because their corn was considered to be a gift from God.

The north-central of Venezuela, Miranda region was occupied by indigenes known to cultivate the sweet corn used for the preparation of the dish. Therefore on special occasions, such as the day of San Isidore the Farm Laborer (San Isidro Labrador), the planting of the corn kernels was done in honor of the native farmers in the region.

Till date, this practice is still on in some farming communities in Venezuela, as corn remains the main source of several dishes such as Arepas, Empanadas, and Cachapas in Venezuela.

Cachapas can be seen served at small markets and street eat-outs, with vendors either preparing the corn mixture beforehand or at the market site, and cooking it over grills on site. One of the most popular Venezuelan corn-based dishes has been the Arepas and Cachapas. They also happen to be referred to interchangeably, given their looks and incorporation of maize in their making.

Cachapas comes in different forms, the popular ones being the Cachapa de budare and the Cachapa de hoja. The former is known to be a mix of ground corn, cheese and sugar or panela, which is then cooked in a budare (clay-made plate) and served with the widely known Venezuelan cheese, queso de map and some butter.

The Cachapas de hoja, however, differs in its cooking style where the batter (similar to the cachapas de budare) is wrapped in corn leaves and boiled in that form.

The prepared arepas and cachapas might look similar, however, their differences are in their ingredients and how they are served. The Venezuelan arepa is a bread made from cornflour and which is then cooked in an “aripo” (clay pot). The cooked arepas are cut into pockets and filled with veggies, avocado and chicken.

On the other hand, Cachapa is a fried tasty pancake, made from sweetcorn of freshly ground corn batter on a budare clay pan, and served with either the Venezuelan hand cheese (queso de mano), chicharron (fried pork) and several other varieties of choice.

It also is yellow, lumpier and thicker than the arepas due to the ground corn kernels used in making it, which is often not paste-like as the cornflour used in making arepas. 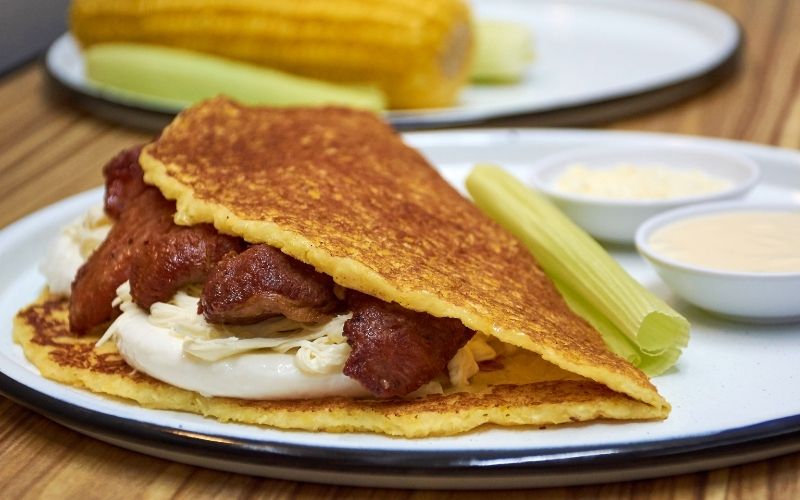 Note that with your cachapa ready you can go for any filling that suits your taste such as shredded beef, queso fresco, gouda cheese, pork cracklings, ham, chorizo, etc. 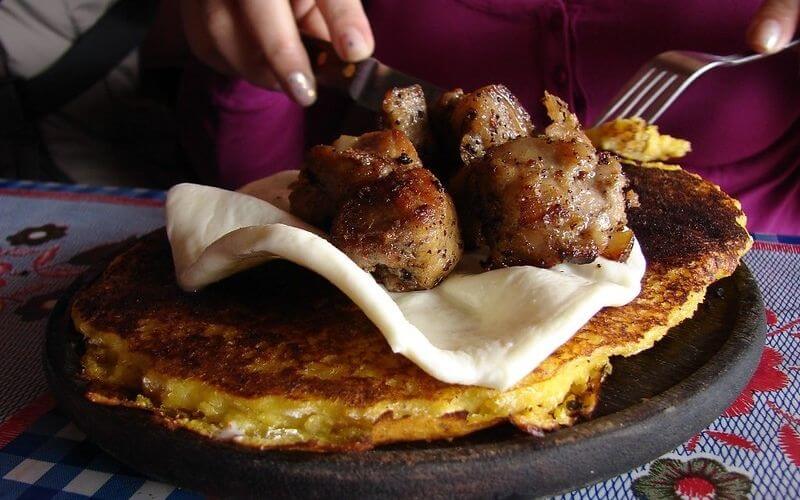 Cachapas are most often taken as appetizers or full breakfast or lunch meals. Hence, it is very common to have it served with queso de mano (Venezuelan hand cheese), telita (white cheese produced from raw milk of cow) or guayanés cheese, which is another cheese option for cachapas.

These soft spreads given their source needs to be fresh to maintain their soft (whey can be used to preserve telita), juicy and creamy taste.

Another popular filling option aside from the cheeses is the “pernil de cochino”, this is an oven-cooked or broiled pork leg. Oh! And if you are still a big fan of cheese, you can have a mix of your favourite cheese and the pernil for a perfect cachapas feast.

If you looking to make a memorable feast of cachapas similar to the ones in Caracas, Venezuela, then three suggested tasty flavours gotten from different fillings below with your cachapas will also be great options.

Close up the feast with guayanés cheese ladened cookies. Enjoy!