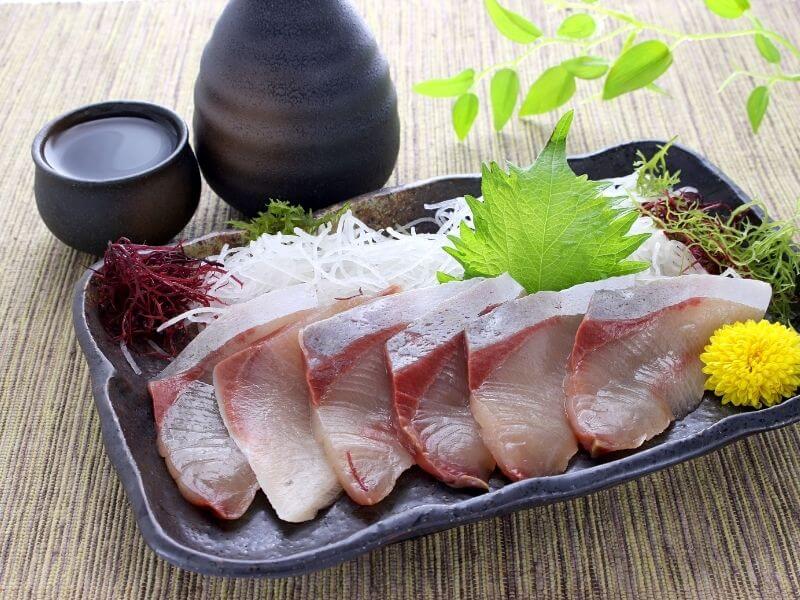 Sashimi and Japanese Food are of course one of my absolute favorites and when I was in Japan I literally couldn’t stop eating Sushi on the fly in those classic train-served-style restaurants. The price is crazy cheap and the quality with taste is unbelievable! Today I’m going to talk about one of the best Sashimi for my taste, Yellowtail Sashimi. 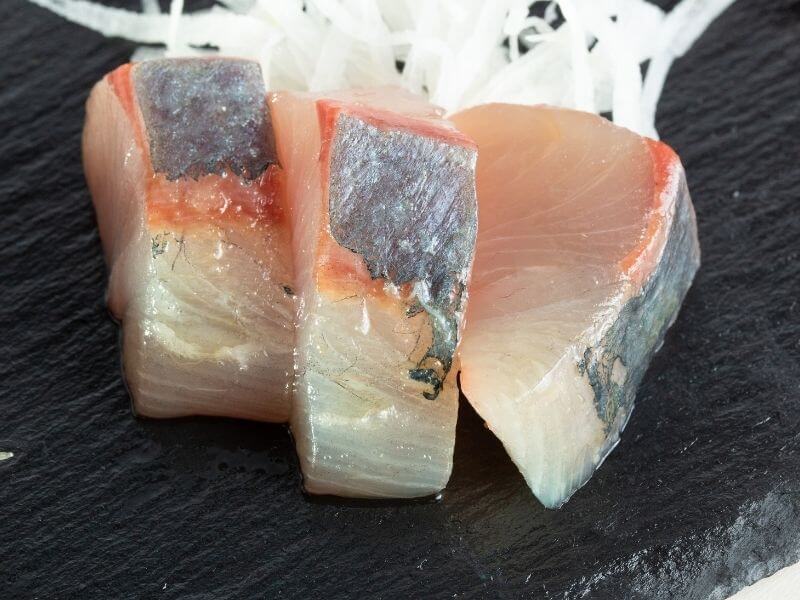 What is Yellowtail Sashimi

Yellowtail Sashimi is a delicious dish served as thin slices of raw yellowtail fish. The fish is served alongside an assortment of condiments and garnishes like wasabi, freshly grated ginger, minty shiso leaves, shredded daikon radish, and soy sauce or ponzu. Ponzu is a Japanese citrus soy-flavored sauce that you can find in most Japanese grocery stores or online. Thanks to its delicate and mild-tasting flesh, the Japanese Yellowtail fish, also known as Hamachi or Japanese amberjack, is the most popular fish used in sashimi. The soft, buttery texture makes it even more impressive. 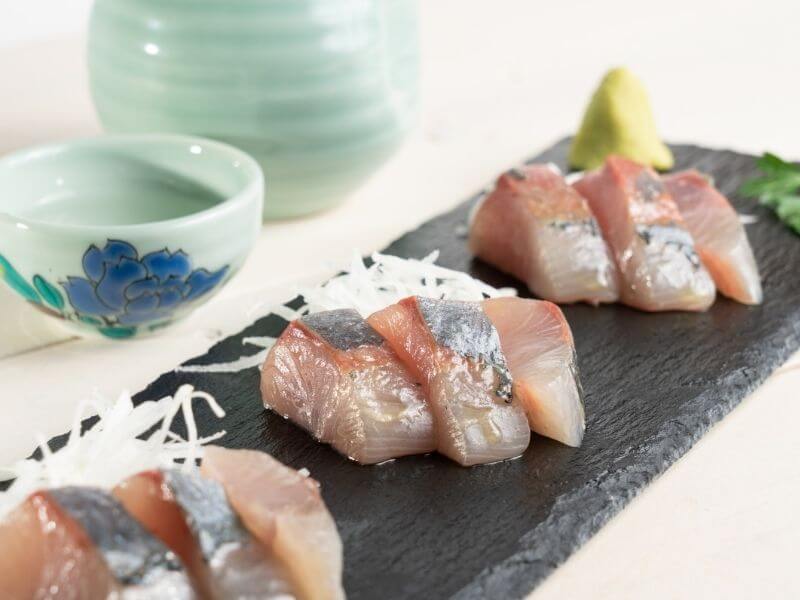 Sashimi is a famous Japanese dish consisting of raw seafood, usually fish. The fish is cut into bite-sized chunks and eaten raw with wasabi and soy sauce. Sashimi is always prepared using fresh seafood, and this is abundant in Japan thanks to the oceans surrounding the country.

It is believed that the Japanese consumed raw fish before creating sushi and sashimi foods. The idea of the tasty sashimi and sushi dishes may have come about as a means of preserving via fermentation. Fermentation was done by salting the fish before placing it in rice that was late cleaned off, and the fish was ready to eat. During the 15th century, people started eating both fish and rice, which shortened the preparation process. Combining rice (a staple household food) and seafood made sushi a trendy snack.

People made sushi without fermenting the meat during the Edo period (between 1600 and 1867). Sashimi became very popular around the 17th century, and towards the end of the 18th century, there emerged a dish of raw fish and rice hand-rolled into bite-size rolls and seasoned with vinegar. During this era, there was a lot of creativity and innovation around preparing raw fish and rice dishes. Today, sashimi is no longer a preserved food – it is served as a ready-made dish and fast food in various restaurants. Sashimi is often consumed without accompaniments except for soy sauce and garnishes. Traditionally, sashimi is eaten by dipping the raw fish cuts in soy sauce permeated with wasabi.

The Japanese yellowtail, also known as the Japanese amberjack, is a type of edible fish that has been popular in Japanese cuisine for a very long time. These temperate migratory fish species are found across the coastal sea of the Japanese archipelago and the East China Sea. The Japanese have different names for the fish, depending on their age. They call the mature fish “kanpachi” and “Hamachi” when the juvenile fish grows to about 6 pounds. The fish is called “buri” when it matures to about 10 pounds. Yellowtail is a general term that describes farmed and natural fish, while young yellowtail (Hamachi) is used for farmed fish.

The origin of the Japanese yellowtail Hamachi is not entirely certain. However, it is believed to have originated in the Kagawa region of Japan. Here, Japanese fishers caught wild juvenile amberjacks off the shores. As years elapsed, the avoidable accumulation of waste and inadequate freshwater caused the practice to diminish. To overcome the shortage of these fish, commercial production of the yellowtail fish commenced towards the end of the 1940s. The increase in demand fueled the growth of Hamachi farming across Japan. 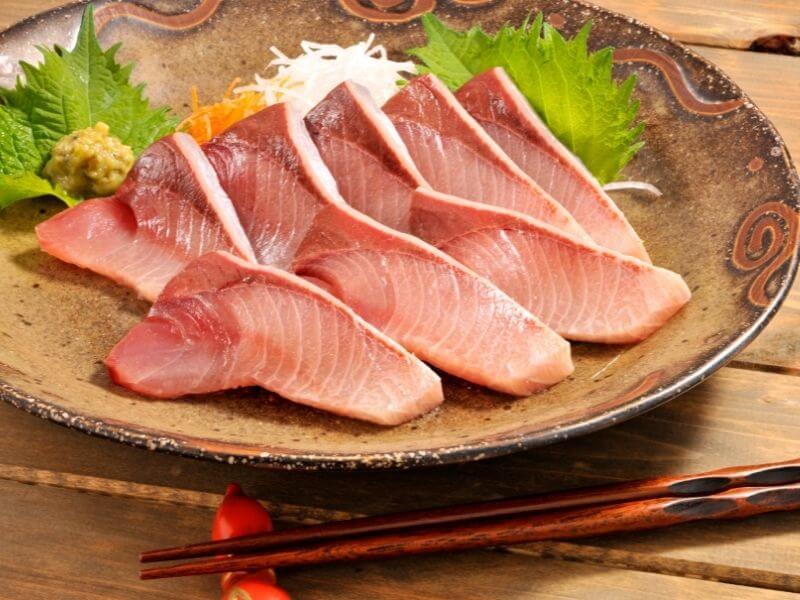 Although there are few popular ways of preparing sashimi, various Japanese dishes use yellowtail. Although preferred raw, some cooks may like to lightly grill or toast the Hamachi with a blowtorch before serving or eating it. Some pour a small amount of cooked hot oil and ingredients to sear the surface of the raw fish slices.

Hamachi nigiri, nigiri, or nigirizushi is another delicious traditional Japanese hamachi. A serving consists of an oblong ball of sushi rice topped with a thin raw slice of yellowtail fish. The rice is usually hand-pressed to form the finger of rice. A small amount of wasabi is usually put between the fish and the rice. If you prefer to use soy sauce, remember to dunk the fish slice and not the rice. This way, you avoid the rice absorbing excessive soy sauce. It is a tradition to eat Hamachi nigiri by hand in one bite.

Hamachi kama is the cooked collar of the yellowtail fish. The collar is the part of the fish located just below the head and above the gills. This part of the fish is rich in fatty meat, making the dish naturally juicy and soft. It is also full of beneficial omega fats. Hamachi kama is also healthy because it is prepared without adding any fat or oil. The fish collar is usually grilled or broiled until crispy on the surface, and the inside is cooked through. When well cooked, you should easily scrape the flesh off the bone with chopsticks. This delicious dish pairs well with a sprinkle of salt, citrus, and soy.

Donburi translates to “bowl” in Japanese but is also a blanket term for rice bowls. This dish has numerous versions that incorporate meat, vegetables, eggs, and seafood cooked with flavorful seasonings. This combination is added on top of steamed white rice. Raw or cooked Hamachi is often served as an accompaniment for donburi.

Hamachi jalapeno is another tasty and easy-to-prepare raw fish dish. It starts with cutting the yellowtail fish into very thin slices and then dipping them lightly in minced garlic before arranging them on a plate. The pieces are then topped with razor-thin cuts of jalapeno and yuzu ponzu sauce. This combination of ingredients brings out a fatty, savory, spicy, and citrusy appetizer for any day.

The negihama is another iconic Hamachi roll across Japan. The dish is a combination of Hamachi and scallion (Negi). You first cut the yellowtail fish into fine minces before rolling it with rice. The outside wrapping of the roll is usually made of nori seaweed. Next, cut the roll into bite-size pieces and serve the dish with pickled ginger, soy sauce, and wasabi. Traditionally, the nori sheet is treated by roasting before being used as wrapping. 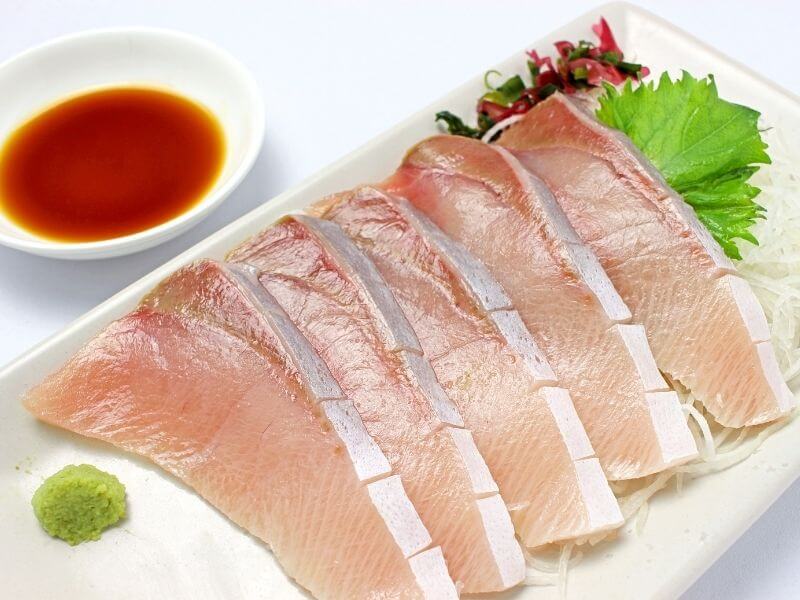 This yellowtail sashimi recipe made in the comfort of your home will let you experience the authentic flavor of raw fish.

Serve the dish the same day you prepare it. The raw yellowtail sashimi will lose its fresh taste the next day.

Use skinless yellowtail fish or remove the skin by yourself

You can mix soy sauce and ponzu sauce to prepare the dipping sauce. Alternatively, you can serve the two as different dipping sauces.

Lubricate the cutting knife by dipping it in water before slicing the fish fillet. Sashimi knives will make cutting Hamachi fish much more manageable.

Always use sashimi-grade Hamachi fish for this dish. It is safe to eat raw and packs very high oil content. The oil gives the fish a very smooth texture. Fresh Hamachi has a light sea smell has no odor.

Like other sashimi recipes, you start with cutting the fish into very thin slices. Arrange the slices on a plate. Top each piece with a thin slice of jalapeno and drizzle ponzu, yuzu, and soy sauce. Garnish the dish with cilantro leaves. Serve the sashimi immediately, or you can chill the plate until ready to serve. 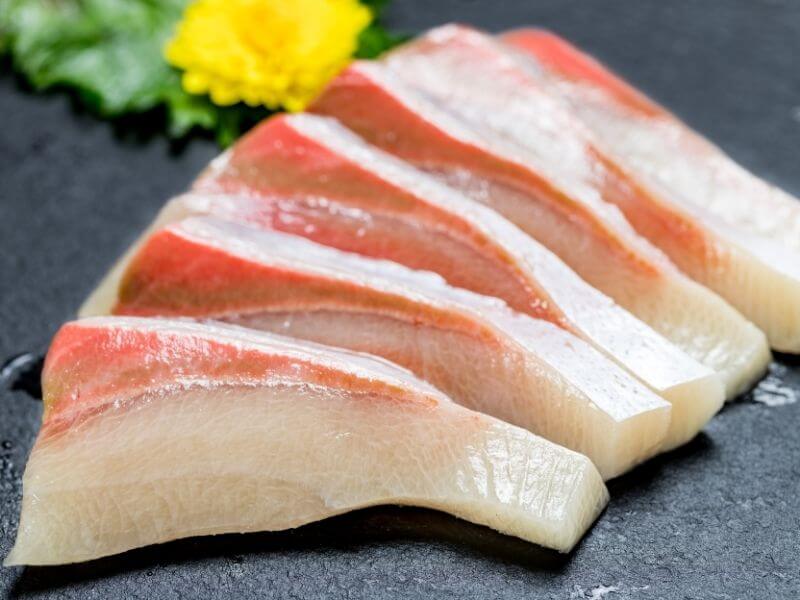 Hamachi is a flavourful delicacy with a share of nutritional benefits, including lots of proteins and vitamins B, D, and E. It is also rich in minerals like phosphorus and potassium, and fiber. Yellowtail Hamachi packs antioxidant compounds, including cancer-fighting components. The serving packs about 141 calories per 100g.