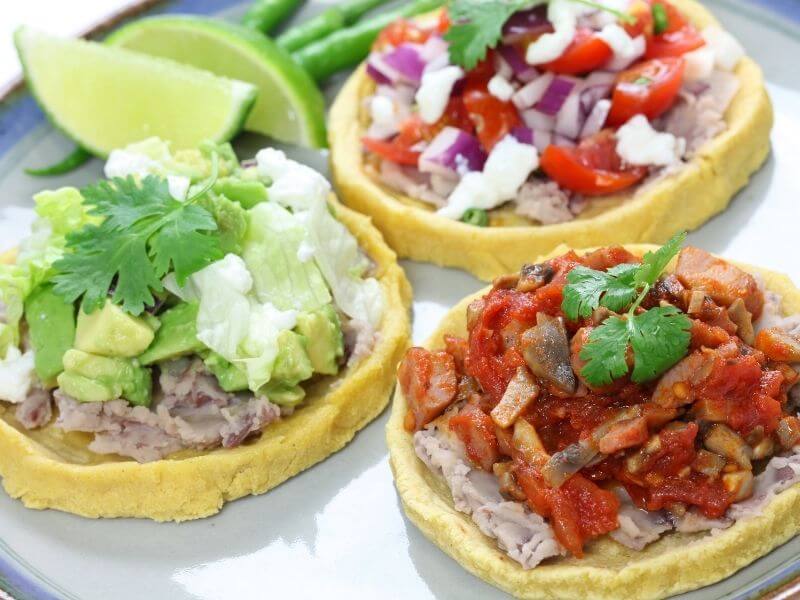 Mexico Comfort and Street Food are probably one of my favourites, the freshness and flavoursome variety of dishes easy to make are outstanding, this style of food has incredibly spread across the globe. From burritos to the iconic tortillas, Mexican food has found its way into many modern kitchens. Among the snacks that are popular in Mexican street food, there is the Sopes de Pollo.

Sopes are basically a dough that is made from corn flour which is also known as “masa harina”. Indeed, the words Sopes De Mas mean “pinched edge.” After the dough has been flattened into a disc shape, the borders are pinched to form a container. Into this dough container, you can stuff various types of topping.

The Sopes-making begins with making a thick flattened dough bed before adding a border to it. When making Sopes in the traditional way, the edge of the Sope is pinched with the fingers while it is still hot. The more modern version is to use two spoons to do your pinching and create the border.

Chicken is a popular ingredient in Mexican cuisine. It is often found in soups, main courses and snacks or street food. 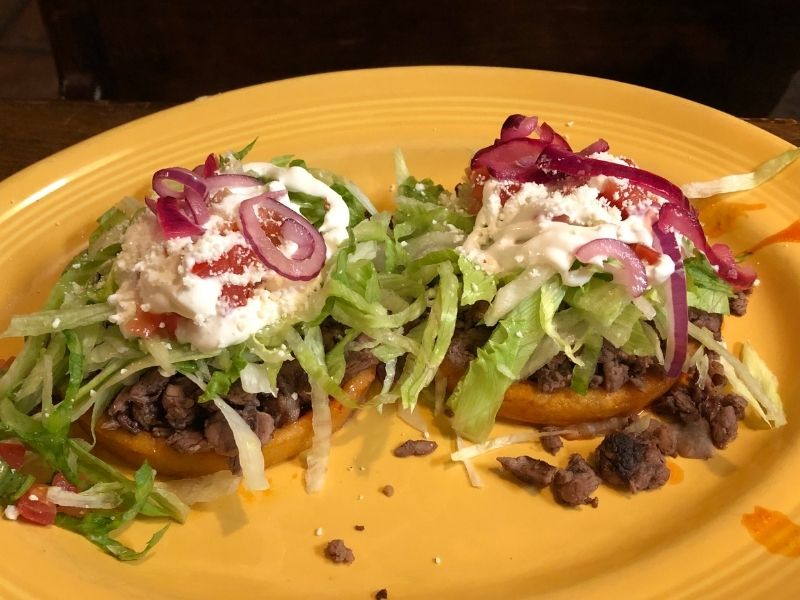 These delicacies are part of pre-Hispanic food. They are believed to have originated in the central and southern regions of Mexico. However, they are part of mainstream Mexican street food which means they can be bought as snacks on the streets.

Today’s Sopes De Pollo is made with great versatility. At the heart of this tortilla-like snack, is chicken. This is usually chicken that has been leftover from a previous meal. The chicken is then shredded before it is added to the sopes de pollo. Other sauces and ingredients make up the final flavorful sope.

Sopes de Pollo is mostly eaten as a starter to the main meal although they can make the main meal too. The Sopes De Pollo is a sope that contains chicken as one of its ingredients. Other types of Sopes can contain meat such as pork, beef or mutton. Newer culinary fads have brought up vegetable and vegan Sopes as well. 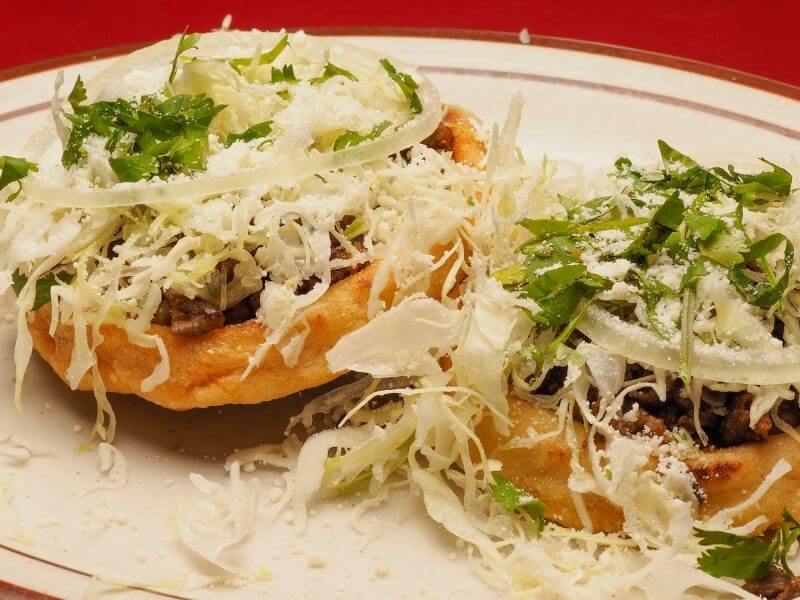 Another popular Mexican dish is the Tinga. Originating from Pueblo in Mexico, the Tinga is a fusion of Mexican and European cooking methods as well as ingredients from the two cultures.  The main ingredient in the Tinga is chicken. This is shredded cooked chicken that is then turned into a thick and nutritious stew.

To make Tinga, onions and garlic are sautéed before adding tomatoes. Next, stock and a mixture of herbs and spices are added as the mixture is left to simmer. When a thick sauce has formed, you add the pre-cooked chicken with Chipotle Chile.

Chipotle Chile is a seasoned pepper that is made with Jalapeno pepper. The pepper is sun-dried on mats after harvesting. After drying, they are smoked before they are rehydrated and pickled in Adobo sauce. The sauce contains vinegar and spices.

Tinga is often eaten as a chicken stew that is quite flavorful. There is the set formula and ingredients that are used to prepare the Tinga. When it is served as the topping on a Sope, it is known as a Sope De Tinga.

The Tinga must be thick enough not to turn your Sope mushy. On your Sope, the Tinga will often rest on a bed of refried beans. It can have cream, cheese, salsa, avocado or other toppings added for that extra punch. 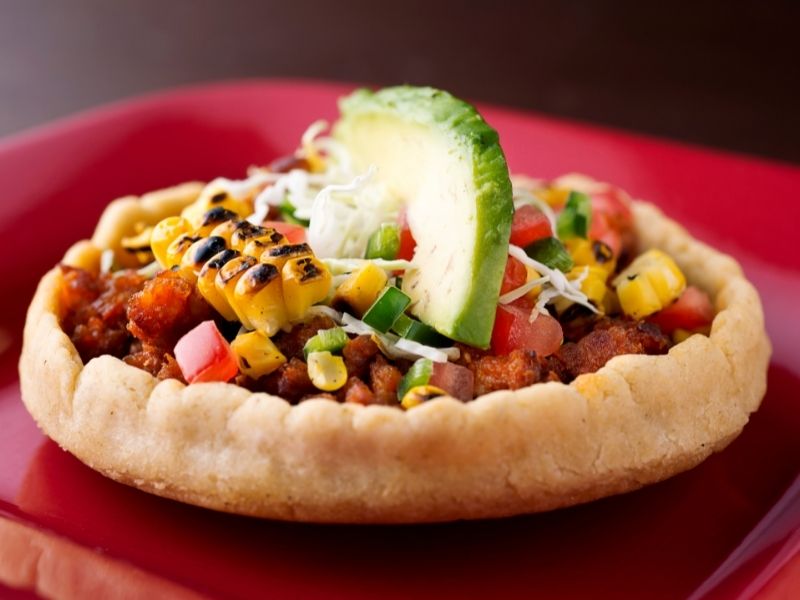 “Picar” is Spanish meaning “to mince”, in Mexican Cuisine though it means “minced” and “spiced” meat. In many recipes, the words minced beef are interchangeable with the words ground beef. Sope De Picadillo has minced meat at its heart. The most common meat is beef although this rule is not cast in stone. Commonly cooked as a stew that contains potatoes and tomatoes, this stew is popular across Latin America.

As a stew, Picadillo often serves as a stew for rice dishes. However, since it can come in many flavours and cooking styles, your Picadillo often acts as a filling for tacos and other snacks. In many Mexican homes, you will find that the family has a recipe for their Picadillo that has remained in the family for a long time.

If you are a fan of spicy food, you can consider adding jalapenos to your minced beef or even chipotle sauce. Other favorite ingredients are cumin and garlic. The addition of broth to your Picadillo will enhance the flavour of the particular meat used in your dish.

In the southern parts of Mexico, it is common to find Picadillo that contains olives, capers and raisins. Although more complex to make, the flavors are certainly worth the extra work you should always remember to break up the larger chunks of ground beef for a more evenly cooked dish.

Alternatives to ground beef for those who do not want to eat red meat are ground turkey and pork. However, for authentic taste, the potatoes and tomato sauce should be included.  As mentioned, the flavours will depend on individual preferences. 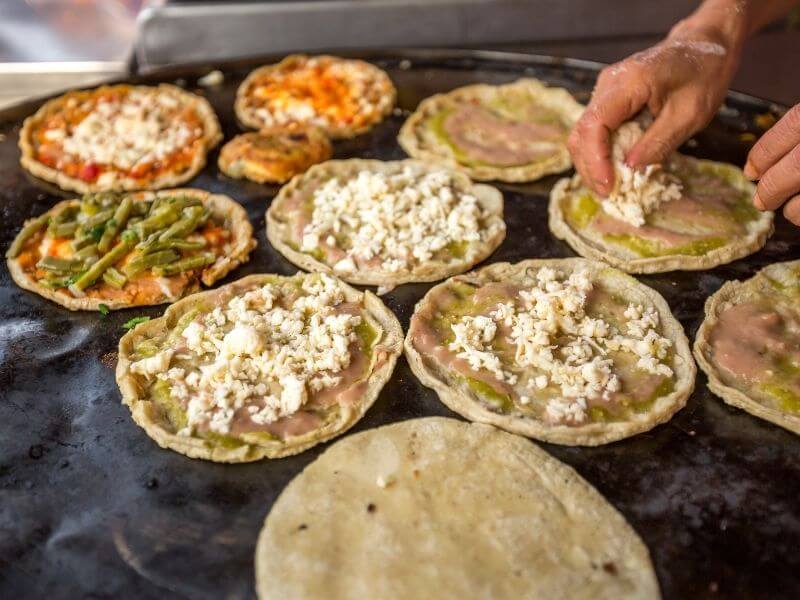 Before you begin cooking your Sopes  De Pollos, collect all the ingredients and choose the freshest ones you can find. It is also noteworthy that corn or masa harina is a very good choice for people who want to avoid gluten in their food.

The following is a Mexican Sopes De Pollo recipe that will wow your guests or family.