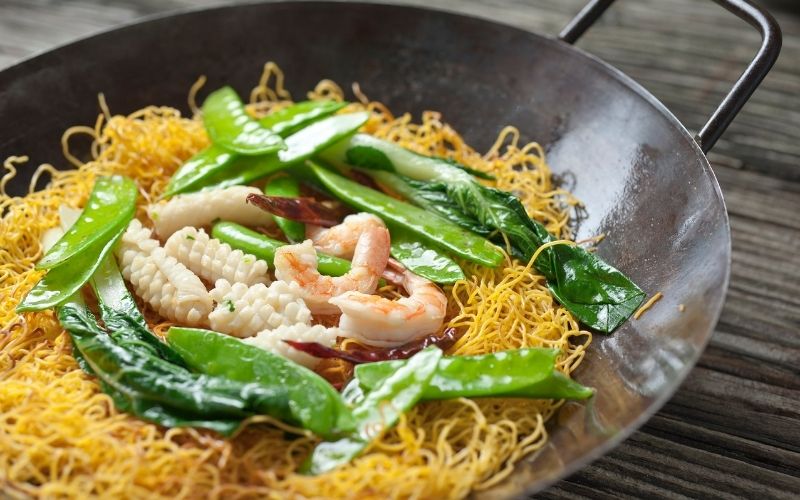 I don’t know about you, but I love Chinese food. What I don’t love is that heavy, bloated feeling I get after eating it from most restaurants. Cooking Chinese food at home means I can control what I do (and don’t) put into the dish. If I want more veggies, great! If I want my food a little spicier or a little less spicy today? Let’s do it! Since one of the biggest reasons to cook food at home is that you get to eat exactly what you want, I always go straight for my favorite Chinese foods when I want Chinese at home. I’m talking about noodles, of course. Delicious noodles covered in sauce, tossed with veggies, or both. What’s not to love? The most popular types of Chinese noodles actually get mixed up pretty frequently thanks to their similar names, but they’re both really good. Right now, we’re going to look a little closer at chow mein vs lo mein, their differences and similarities. Then, I’ll share a recipe for each!

Where Chow Mein and Lo Mein originate from

Eventually, people started frying their noodles after the noodles were already cooked, and so chow mein was born in Northern China. It started getting popular in the United States around the 1850s, so it’s not exactly a new arrival, either.

Both these dishes are made with egg noodles (Asian style, not the wavy kind). This gives them that perfectly dense texture that’s so fun to slurp up when they’re covered in sauce. Both chow mein and lo mein are usually made with or served with vegetables and a soy-based sauce.

And obviously, both dishes are delicious.

Chow mein and lo mein have a few differences. The biggest one, and the one that makes the most difference between the two noodle dishes, is that chow mein is fried, and lo mein is not.

Let’s look at the names for a second. Mein in English translates to noodles. Chow translates to fried or stir-fried, while lo translates to tossed or stirred. If you can remember that, it’s actually really easy, because the difference is right there in the name:

That’s the main difference (or is it the mein difference!?), but there can be a few other differences, too, depending on where you are and who’s preparing it. If you’re the one preparing it, you can mix and match as you see fit, but these are the general trends.

Is made from either fresh or dried noodles. Because chow mein is fried after it’s boiled, the outside gets a tougher texture that works great with either type of noodle. If it’s easier to keep dried noodles in the house than fresh ones, you might want to try a chow mein dish.

Is made with either round noodles or flat ones. There’s a similar dish, chow mei fun, that’s made with thin rice noodles or rice sticks instead. Basically, stir-fried dishes tend to work well with whatever is handy.

Sometimes has less sauce or fewer veggies; the star here is supposed to be the textured noodles.

Is usually made using fresh noodles. Fresh noodles really shine when they’re cooked this way, and it gives the taste and texture both a boost.

Is almost always made using round noodles.

That’s basically it! These really are very similar dishes, but the handful of differences really impact the final result. 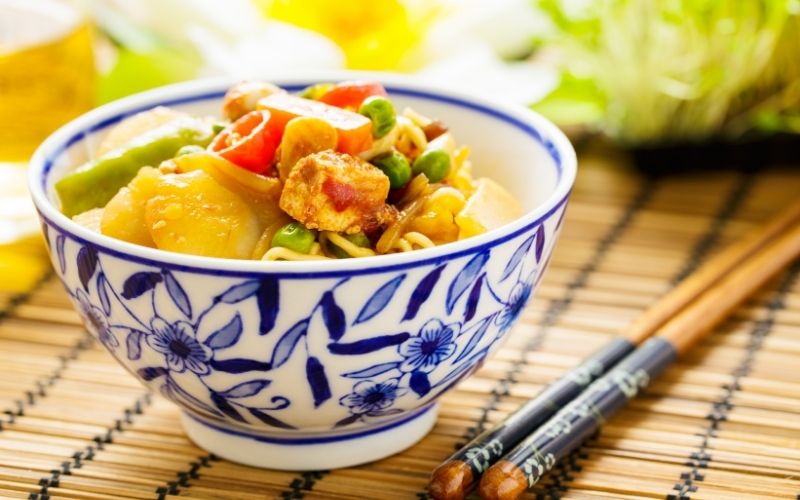 Confession: for a long time, I didn’t think I liked Chinese food.

I know, I know. That’s horrible, right? It’s so delicious that seems impossible. Then, finally, as a college student, I tried chow mein after a friend accidentally ordered it.

Okay, so I know now that this particular chow mein was pretty overcooked (which is something you can do if you like it that way!), but there was just something about the harder, fried outsides of the noodles and the barely-soft inside of the noodles that intensified the flavor. I ate until I was full, and then I ate it for the next several meals until I ran out.

Now I’ve come to like it cooked a little bit more traditionally. It’s still the same principles, with a fried outside and soft inside, but I don’t cook them quite as long, so there’s a little more burst of flavor and texture from the center of the noodles.

My favorite time to eat lo mein is when it’s just a little chilly out. The soft, chewy noodles, the clingy sauce, and just a hint of heat are fantastic for warming the stomach.

My family, however, likes it during summer, with the noodles a little cold or not properly reheated.

To each their own, right?

Whatever your reason for making lo mein, it’s a delicious meal, and it’s pretty easy, too!

Here’s what you’ll need to make a wonderful lo mein at home: 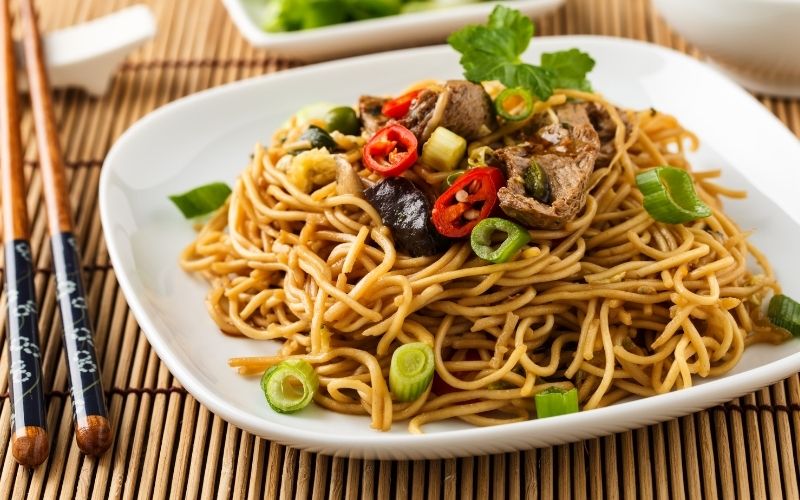 Now that you’ve looked at both of these recipes, you might be wondering which is healthier, chow mein or lo mein.

All things being almost equal, lo mein is probably going to be the healthier choice for most people. However, if you like your lo mein drenched in sauce but your chow mein fried in a healthy oil, that changes the equation.

Both dishes are pretty reasonable and very easy to make healthy or to tailor to specific diets or needs.

Lo mein is healthier on an average diet with no modifications, but if you’re in the mood for fried noodles, don’t be afraid to chow down on chow mein. When you’re cooking these dishes at home, they’re close enough to the same level of healthy that you really don’t need to worry about it. Just focus on good ingredients and the right kinds and amounts of oils, and you’ll be all set!

Hunan Beef – What it is, History, Calories and Authentic Recipe.

Pho Dac Biet – A Gloriously Vietnamese Dish enjoyed all around the World. [with Recipe]