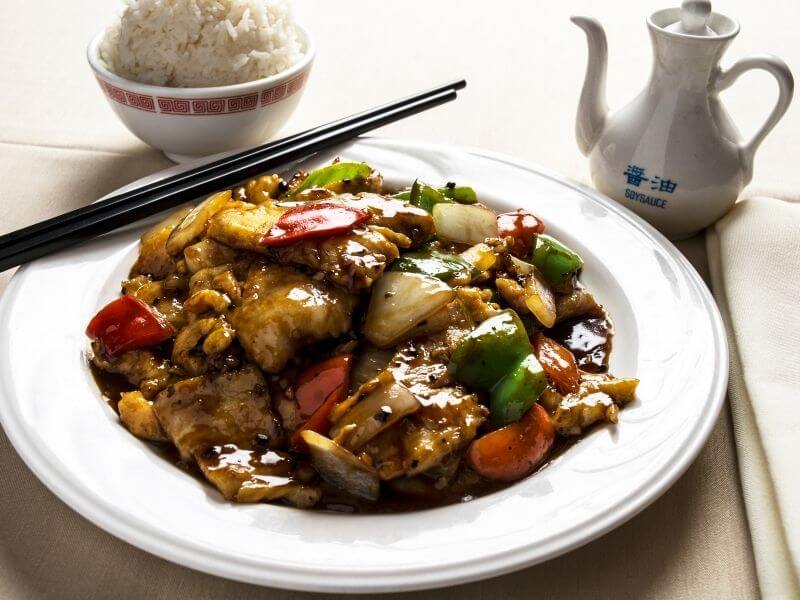 Hunan Pork is a very distinguished dish in Hunan cuisine, which is well-known in China and across the globe for its fiery and chili tastes. It frequently contrasts with Szechuan cuisine and is amongst China’s eight eminent culinary cultures and traditions. Hunanese dishes are famous for using an abundance of garlic, shallots, and spicy chili peppers.

It is what distinguishes it from Szechuan cuisine. One important thing you’ll need to keep in mind when cooking Hunan Pork or other Hunan meals is the quantity of oil used throughout every recipe. Hunan-style Chinese food, like Szechuan-style cooking, consumes a ton of oil. Many dishes require almost half a cup of oil!

The cooking strategies that home cooks use in Hunan cooking include searing, stir-frying, quick–frying, deep-frying, simmering, and steaming. Certain meals may demand several cooking methods, and various Hunan foods will involve marinating, which you can do nightlong. But when it comes to Hunan Pork, you will be surprised at how easy and quick it is to make. Hunan cuisine gets titled after the region of Xiang, which is near the Xiang River. Hunan Pork is one of Hunan cuisine’s classic delicacies, and it also gets referred to as Xiao Chao Rou, which means small stir-fried pork.

Although it originates only from a basic, daily culinary history, it is a fiery, smoky, and very fragrant dish – comprises fatty pork strips, fermented black beans, and spicy chili peppers. You’ll be glad to know that peppery, spicy, fresh aromatic, and richly perfumed are the underlying notes in Hunan Pork.

Pork can get substituted with tofu, chicken, or beef. You have absolute control over the peppers you choose. Most people prefer to use leeks or onions in place of or in combination with shallots. Several folks utilize oyster sauce, but you can add Hoisin sauce too. It is a brown, spicy, and somewhat sweet sauce commonly used in marinations and stir-fries.

Likewise, you can try replacing hot peppers such as Serrano peppers, Thai chilies, Jalapenos, and Chinese peppers with more red bell pepper to make it hot and spicy. With every substitution you make, this dish can get spicier and spicier.

The good thing about Hunan eateries is that it is utterly prominent due to its vast range of regional flavors. The majority of what gets used in creating their dishes comes from domestic agricultural producers.

Due to its significant saturated fat, pig belly is the most prized portion of pork in Husan cuisine. It does not, however, taste greasy when cooked thoroughly. When making Hunan pork, despite similar popular meals like braised pork belly, twice-cooked pork, or a Chinese pork burger, you’ll have to cut off the skin since fast stir-frying won’t get cooked the skin entirely.

You need to note that Ethnic cuisines demand precise attention to the starting ingredients, chopping expertise, cooking duration, temperature, color, and look. With Hunan pork, both light and dark soy sauce are necessary. The first lends a pleasing brown sheen and a tinge of sweetness to the meal, while the latter contributes a fragrant salt flavor. The robust, spicy tastes of Hunan and Szechuan cuisine are well-known worldwide. Nevertheless, due to their various geographical locations, there are notable variations between Hunan pork and Szechuan pork. Such meals will have your tummy grumbling and your appetite swollen just by smelling them. These cuisines’ dishes are not only delicious but also intensely irresistible. Let’s look into these differences.

Hunan cuisine meals should preferably include tons of crushed chilies with seeds and a bunch of dried chili peppers. Due to this, the flavor of these recipes can get described as a mix of onion, heat, and garlic. Moreover, it also brings out the umami flavor of the meat that gets utilized.

All of the ingredients, including the marination, are cooked individually and combined immediately before dishing out.

Hunan cuisine provides a touch of crispness to virtually every dish by using a lot of veggies. There are several fish recipes in this cuisine. Pork is the most popular meat, after which comes beef. Smoky and preserved meats get used a lot in Hunan cuisine.

Chilies and a lot of Szechuan peppers are used in Szechuan cuisine. It imparts citrus aromas and a tingling sensation to the palate, providing this particular cuisine its distinct flavor profile. As a result, the tastes of Szechuan cuisine may get viewed as tingling, overpowering spice, and garlicky.

A lot of chili bean paste gets used in Szechuan cuisine. This paste is a fiery, salty sauce prepared from broad beans (fermented), soybeans, salt, rice, and, of course, peppers. With tons of salted peanuts, cashews, and sesame seeds incorporated into the dishes, this cuisine has a lot of nutty chewiness.

Beef is the most popular meat in Szechuan cooking, behind which pork trails closely. In Sichuan, rabbit meat is prized meat too. An additional feature that separates the two cuisines is Szechuan cuisine’s usage of a mix of spicy, sweet, and sour tastes. Hunanese pork pairs exceptionally well with black bean sauce. It has a salty, spicy taste which is uniquely southern Chinese. Many people like to devour this uncomplicated, homey stir-fried meal a lot. You can even occasionally spice up the dish with a dash of chili bean sauce.

It is simple to prepare and pairs nicely with boiled rice and any stir-fried veggie. With the addition of black bean sauce, the Hunan pork’s taste gets astronomically better.

As you can see from the recipe below, the imminent difference is that of dark soy sauce. This particular ingredient does not play a significant enough role. Instead, chicken stock steps in. And more importantly, the use of black beans is eminent too. Let’s take a look at how you can make it.