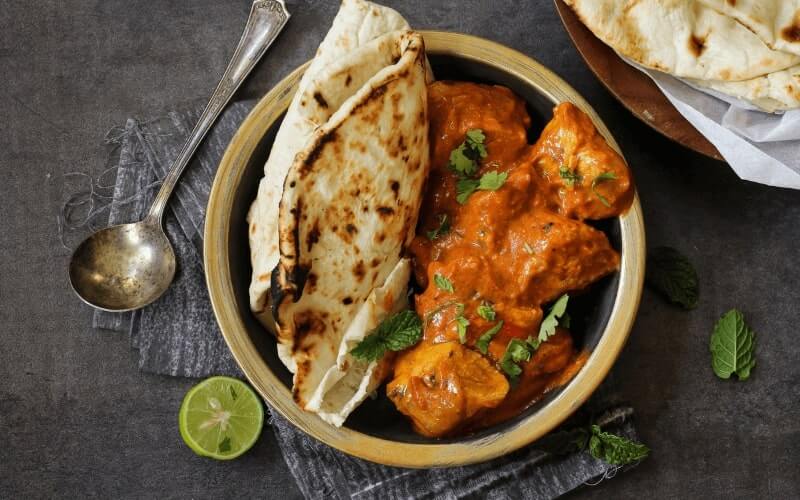 Peanut butter chicken is an American dish that has become increasingly popular in recent years. Usually, the recipe consists of chicken, peanut butter, and any number of additional ingredients that are either mixed into the peanut butter or spread on top of the cooked chicken before serving.

Once you try it, you’ll understand why peanut butter chicken has become so well-loved over the years! If you never tried it, you are missing out on one of the most popular and nutritious dishes around the world. Peanut butter chicken recipes are easy to prepare as they don’t need many ingredients.

To better discover this dish we need first to clarify that exist different variants of Peanut Butter Chicken in the World, so I will try to lay them out for you.

This delicacy is a balanced dish that is enjoyed by both children and adults alike. Weight trainers prefer the dish as it helps them gain pounds or lose weight while exercising, depending on how they use it.

Additionally, it can help boost a person’s blood sugar level and cardiac health. However, this dish is rich in calories, and therefore, people should enjoy it in moderation.

Let’s dive into where this Dish originates from, find out all the different versions around the world, and some great recipes.

Butter chicken is the most popular meat dish in Asia as in the rest of the world. From India to Thailand and China to Singapore, they prepare chicken in various ways, including boiling, steaming, poaching, and deep-frying.

Chicken is among the part of Singapore’s national dishes, the Hainanese chicken rice, which came into the country through southern Chinese island immigrants.

The combination of chicken and peanut butter makes for an exciting combo. Because Asia is so large, there are many regional varieties in preparing recipes bearing the two ingredients. Other than the methods of preparation, there are a wide variety of spices to choose from.

One of the most common ways of preparing peanut butter chicken is to make satay. This is a peanut butter sauce that is popular all over Asia, although it has different names according to the region. It can be used as a dipping sauce for chicken dishes or as a salad dressing.

However, this peanut sauce’s most popular use is to use it to flavor skewered chicken pieces, which are then barbequed. This method initially came from the Middle East, although their meat of choice is beef. In Asia, it is Chicken or pork.

Another common way to use peanut butter in the preparation of chicken is to make a marinade. The strength of the flavor depends on how long the chicken pieces sit in the peanut butter marinade.

The marinade’s spices and ingredients are often regional, with the Thai, Chinese and Indian being amongst the more widely known.

Peanut butter chicken wraps are a popular snack in Asia. Some varieties will use peanut butter, but it is not uncommon to find whole peanuts used for a crunchier taste.

The wraps come in the form of tortillas stuffed with chicken pieces. Sometimes, the wrap is made from veggies such as lettuce.

Another popular Asian peanut chicken dish is the or galinha à Africana, a Macau dish inspired by Portuguese and African cuisine. It is prepared with barbecued chicken coated with a sauce made of coconut milk, peanuts, shallots, paprika, and grated coconut.

All in all, there are a wide variety of exotic chicken and peanut butter dishes you can get in Asia.  Whether you like hot and spicy food or milder flavors, you are sure to find an Asian peanut butter chicken dish to suit your palate. 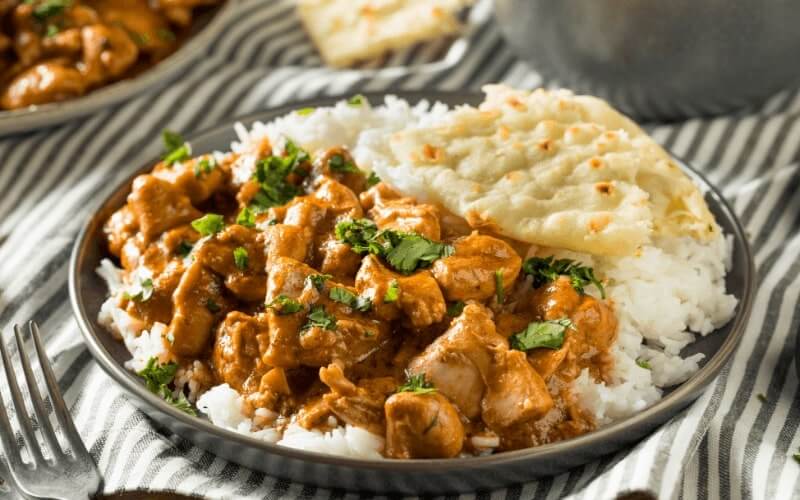 Peanut butter is one of those foods that define America. It is not only eaten on toast but is also common in cooking. American cuisine is a blend of native ingredients and cooking methods blended with cooking styles and ingredients from colonialists and immigrants. There is also the influence of West Africa in the African American cooking of peanut butter chicken.

The peanut butter sauce or stew is a dish that has an African influence. The chicken pieces added to the pot makes for a warm and tasty accompanying dish to rice or bread. Of course, peanut butter stew can have a variety of other ingredients.

Roast chicken is primarily a European influence in the preparation of chicken. However, American influence has brought peanuts into the mainstream as some of the ingredients used to marinate chicken. In other instances, peanut butter sauce is used as a dip for meals that include chicken. 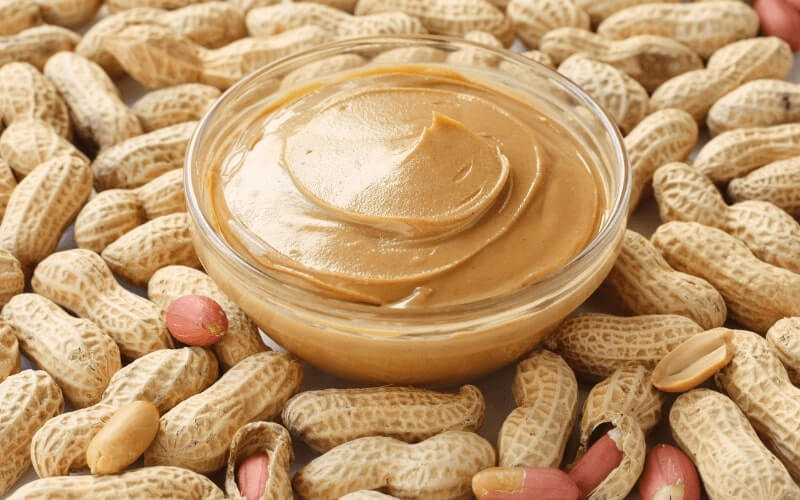 With many immigrants of Asian origin, it was always a matter of time before their cooking and dishes joined mainstream American cuisine. Peanut butter chicken satay is no longer a rarity in America thanks to Asian immigrants.

The Latino population has also contributed to the variety found in American cuisine. One of the most widely known snacks is the tortilla. Others include burritos and tacos. These foods can incorporate chicken and peanuts, or people can eat them with a peanut butter-based dip. 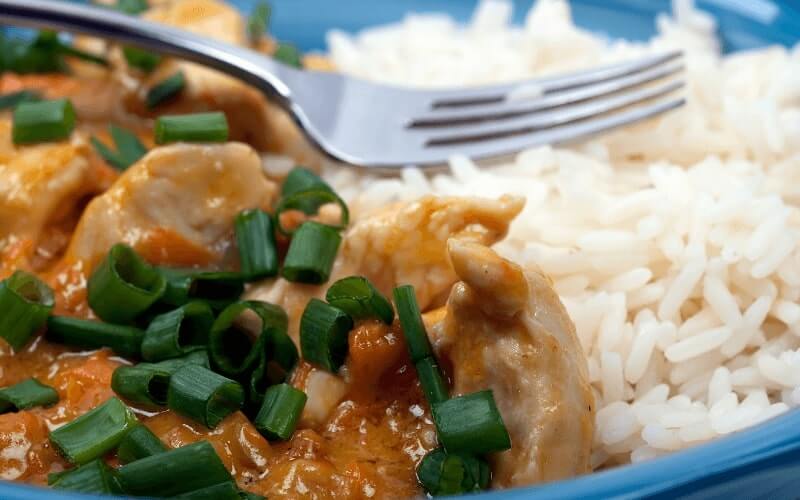 It is unknown where exactly in China or even who first created it, but many believe that it was invented during the 20th century around Shanghai a time when meat was scarce and sugar was expensive. Some think that cooks created an easy alternative with sugar-coated peanuts (and later switched to honey) as well as thick gravy to cover up any remaining flavors.

Another story suggests that soldiers stationed near battle sites ate scraps from cooking pots, which may have been too small for large amounts of meat or vegetables, leading them to mix these items together without having any idea what they were creating. 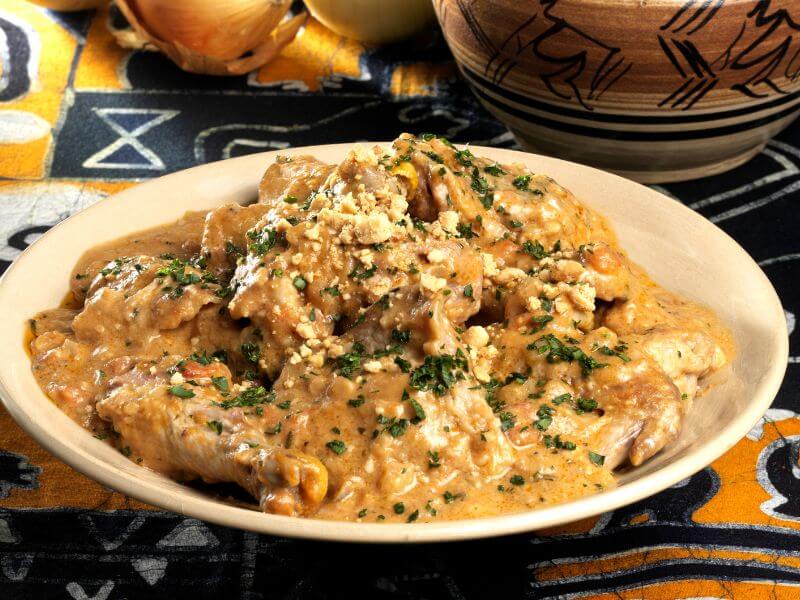 Chicken doesn’t have to sound dull and lame. Not when you add a twist to this wholesome dish by marinating the chicken in rich, creamy peanut sauce. The result is a nutty, soy sauce heavenly goodness in one dish. Then, put the marinated chicken pieces onto skewers and grill them for a finger-licking meal. Here is an easy recipe for peanut butter sauce recipe for making chicken marinade.

Turn your chicken into a deliciously creamy dish. The peanut marinade is easy and will not take you a lot of time to prepare. You will need a big bowl to hold all the chicken and the marinade.

Mix all these ingredients plus the chicken in a big bowl and let it sit for at least an hour before putting the chicken pieces onto the skewers for grilling. Brush the chicken with any left-over marinade to avoid wasting any juicy ingredients as they will add a rich flavor to your dish. 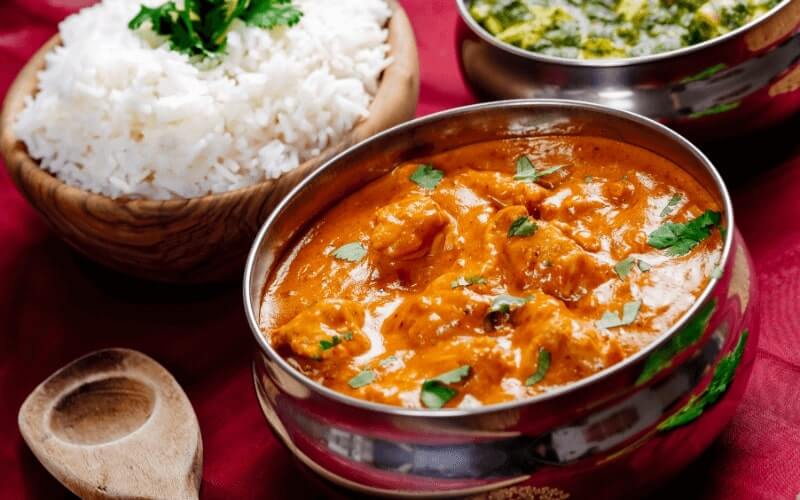 Thai peanut butter chicken is an Asian-inspired delicacy made with broccoli and chicken in a spicy peanut sauce. For those who prefer fewer spice foods, you can use less cayenne.

However, if you love the burn, use as much as your palate allows. You can also use low sodium soy sauce if you don’t fancy salty food. You can prepare Thai peanut butter chicken in two ways. You could choose to eat it with rice or vegetables, such as broccoli. Here is a simple recipe on how to prepare this delicious popular dish. 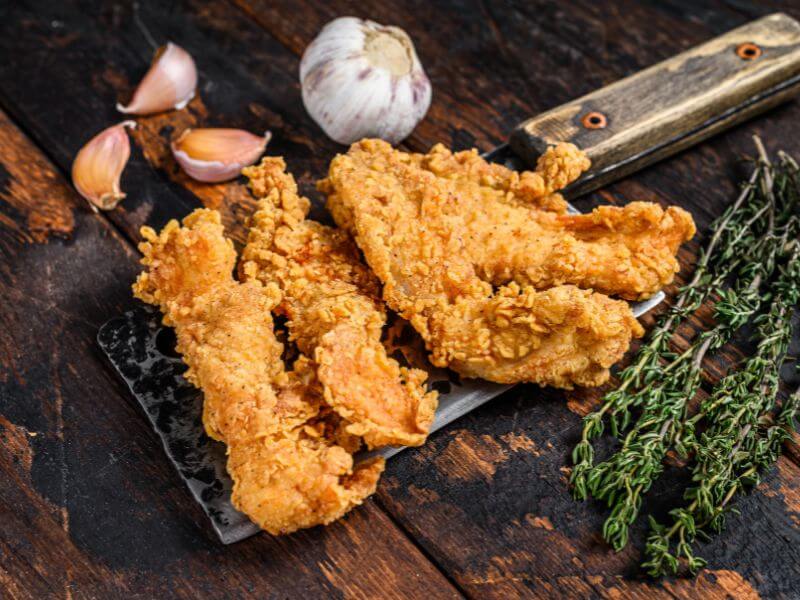 If you’re a fan of fried food, Fried Peanut Butter Chicken is a great option when you want to serve something new to your family or even an evening meal with friends. Tender chicken breasts are coated in a rich blend of peanut butter, honey, soy sauce, garlic, and other delicious flavors such as Curry, Turmeric, and Paprika, then coated in crunchy cornflakes before being fried.

It’s served on top of creamy mashed potatoes which add another layer to its wonderful flavor. This is a great recipe for any time that you need to impress dinner guests or just want to try something new for dinner. The creamy mashed potatoes serve as an excellent side for it too so don’t forget about them when making it, especially with some gravy. 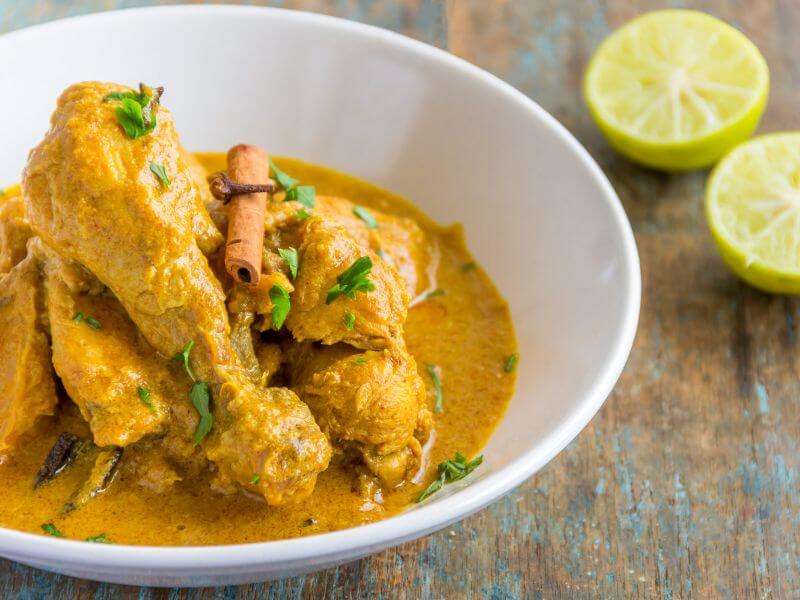 It’s not uncommon for people to get confused between chicken korma and butter chicken. They are both Indian curries that use chicken in their recipe and they are very similar, but they also have key differences. Butter chicken is generally thicker than korma and also sweeter.

Korma is usually made with yogurt, coconut milk, and nutmeg. The meat used in korma can vary depending on what part of India you’re from, but chicken or lamb are typical options. Butter chicken is typically made with cream rather than yogurt or coconut milk; it also uses tomato paste which gives it a much different taste than a korma.