Sisig – A Pinoy Must Try Delicacy [Origin, Curiosities and Recipe] Sisig is a Filipino savoured dish, laced to its cultural heritage and hence one of the nation’s favourites. It entails serving a hot plate of spicy grilled/fried chopped pork (often parts of the head,  cheek or shoulder of a pig) with an addition of chicken liver to give a crispy meaty taste. Often served as either a main course, snack or just salad.

Sisig’s name refers to the technique of preparing fatty meat (pork inclusive) among the Filipinos – which is by marinating the meat in lemon juice and seasoning with spice (chili peppers, calamansi, onions and more) and salt as needed.

In going further we will be describing the Kapampangan Sisig, its origination as referred by stories about the dish, its preparation with sisig marinade and on what Sisig was before its modern recreation with chicken liver and more. 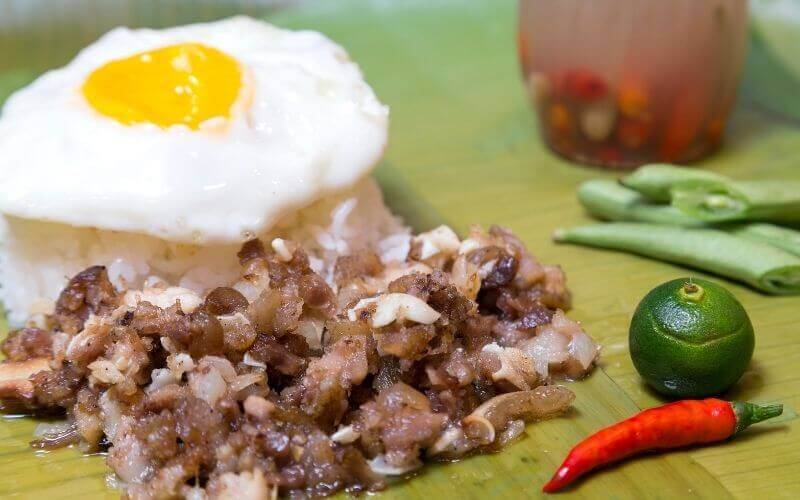 The true origination of the Filipino dish  (popularly called sinigang) comes with several stories, but the relief is that they all agree on the existence of sisig long before the 20th century and how it was known and appreciated for its sourness as a dish. Another agreed but shocking discovery is that the original Sisig had nothing to do with meat in its serving. Sisig was a salad to some of its locals.

The name sisig, is a Tagalog word, called “sisigan” which meant “to make sour” was used as a general term to refer to sour dishes eaten as main meals with no accompaniment. This gave birth to the name “mapnisig” used to refer to individuals who preferred sour dishes at the time.

However, another common meaning given is traced to the 17th century (in 1732) when the term was believed to have been first used in a Kapampangan dictionary by a Spaniard serving as the parish priest (Augustinian), Diego Bergano.

He defined the word sisig as a salad prepared with vegetables such as green guava, green papaya, garlic, salt, pepper and vinegar.  Another association with sisig is its reference to a sour soup dish of seafood (shrimp, fish) and meat (chicken, pork). This then linked the derived word “mapnisig” to refer to individuals who had preferences for the sour salad dish. Aside from the discrepancies with the meaning of the sisig term, the ideal purpose of the dish was its ability to induce soberness, reduce symptoms of hangovers (by suppressing nausea) and help pregnant women with their craving needs.

So at what point did the meaty version of sisig emerge as a celebrated dish? During the American occupation of the Philippines (1898-1946) , the U.S Airforce base was stationed at Clark Base in Angeles city, Pampanga with the kitchen staffs in charge of their meals who would discard unwanted portions of porks (often pig heads) at the surprise of  local residents.

The people who offered to get the unwanted portions at cheap rates from the kitchen, used the boiled, cleaned up and chopped pig heads to prepare the tasty, spicy sisig dishes. The jowls and ears were chopped, boiled, and mixed with souring agents (vinegar), pig brains with onions, pepper, and salt for seasoning.

The version of a green salad with accompaniment of roasted pork was birthed. The Kapampangan people who mainly occupied Angeles city in Pampanga at the time, came to be associated with sisig as their special dining culture. From then on in the 1970’s were different variations of sisig dubbed to be modern creations of the original sisig dish spotted. However, of them all one recreated dish stood out!

One of the creators of the modern style of sisig was Lucia Cunanan (popularly referred to as Aling Lucing or the sisig queen), a lady with an eatery at the railroad crossing in Angeles City, Pampangan. In mid-1974, her version of sisig became the widely known form of the dish eaten today.

Although her dish retained  her original Kapampangan dish common among residents, it was laced in a different form of preparing the meat and the entire dish as a whole. Aling had her boiled meat grilled, chopped and fried with chicken livers and pig brains seasoned with vinegar, onions and pinggang tulo to give a crispy tasty dish served in a special sizzling hot plate.

Another invention at Kapampangan was by Benedict Pamintuan who had the Sugay’s eatery in Angeles too. The invention was the serving of the dish in a hot plate to prevent the pork fat from caking-up (larding). This innovation was one of the factors that brought out the dish from a regional to a nationwide celebrated dish.

Aling’s choice of pig portions used was specific to the snouts, ears and cheeks although this was to meet up with the increasing demand at the time. She indeed revolutionized the Kapampangan dining culture. The Sisig Kapampangan is now referred to as the sisig dish with chicken livers and more. The common culture of dining in close-up canteens changed when diners sought Aling’s version of sisig served at an open eatery along the railroad in Kapampangan. The focus was more on the special taste of the dish and how it was served rather than the location of the dining (which was in a slum at the time).

By 2003, Angeles city held its first sisig festival (Sadsaran Qng Angeles) debuting the town as the Philippine’s capital for the sisig dish. Celebrated annually (December), the Sisig fiesta celebrates the dish by showcasing chefs competing in the preparation of sisig, celebrity cooking shows and a display of the culinary talent of Angeles locals.

Today variations of sisig including the use of pork cracklings, egg, mayonnaise and more are common, but with a root in the sisig Kapampangan (Aling’s special recipe). Aling’s recipe goes not further than 3 phases: Boil, Broil & Grill.

The sisig marinade is the soaking juice for the pork portion selected just before it is grilled/fried or undergoes any form of heating. Using a large mixing bowl, we prepare a mix of the following marinade ingredients: Due to accessibility of specific portions of pork such as the belly than the usual pork (head) specific to the sisig recipe, we will highlight the preparation of the sisig without much reliance on liver but on the pork portion. The richness of the meal with this portion of pork isn’t sacrificed. Although the Aling’s 3-tier technique of boiling, broiling and frying (not grilling) is still applied to this recipe.

For the Pork belly:

Place the marinated pork belly on the one-line arranged vegetables. Drizzle the pineapple/orange juice over the pork and apply a tight foil covering. Heat for about 3 hours in the oven until pork becomes tender. Remove and allow to sit for 60 minutes. Vegetables should be removed and the pork transferred to a rimmed tray on its other side.

Add salt for seasoning and heat at 450° for 15 minutes to a crispy brown form. Allow to cool for 30 minutes once removed from the oven.

Enjoy your dish! To save time, scoring and refrigerating of the pork belly can be done 3/4 days ahead.

4 thoughts on “Sisig – A Pinoy Must Try Delicacy [Origin, Curiosities and Recipe]”