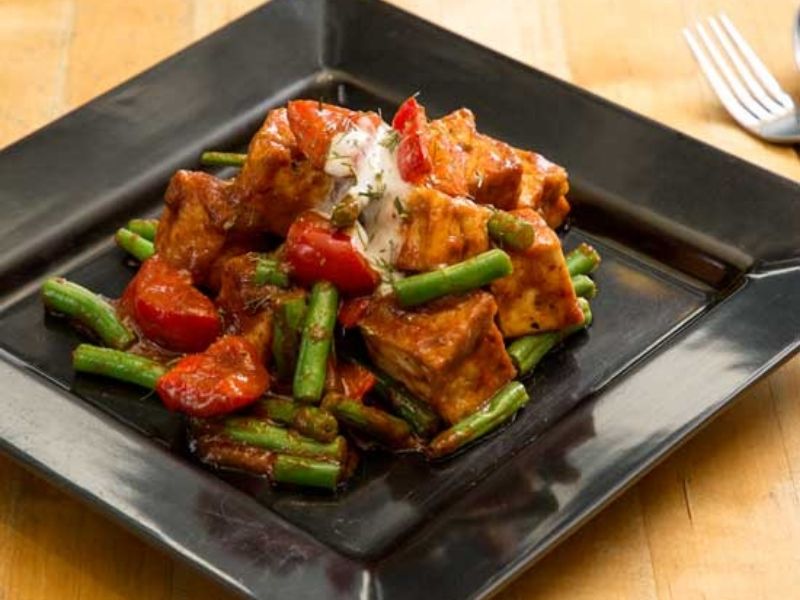 If you’re always on the hunt for the most fascinating foods in the world then you might want to try Thai food. Thai people have established themselves as some of the best when it comes to cooking traditions. Not just that but they also have distinct etiquette when it comes to the food they prepare and eat. Their food just like in many other countries represents their culture. They prefer to have all their meals shared as opposed to eating on single plates. One of my favorite is Pad Prik King.

This is no surprise considering just how friendly they are generally. They enjoy any opportunity to sit in a group and eat. So there are several such dishes that Thai people prepare. They include Pad Prik King. Have you ever heard of it? If you haven’t you will certainly learn more from this article. We talk about how it came to be, why it’s such a popular dish, its variations but most importantly, we have something for those who not only enjoy eating but also cooking, an Authentic Recipe. 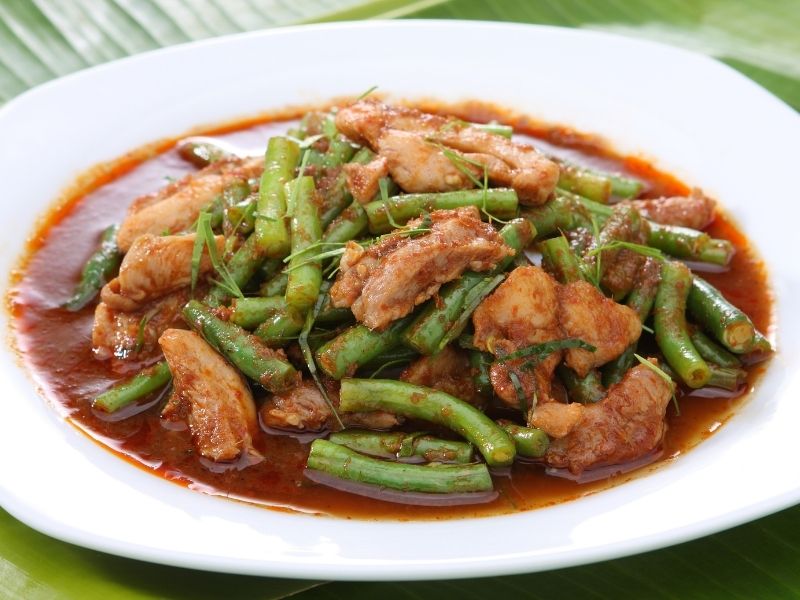 Pad prik king is also known as phat prik king. As already mentioned above, it is a dish of Thai origin, but to add to that it’s a Thai curry. This curry is normally drier than other different ones that are served in Thailand such as red curry. Preparing it involves frying it in oil but liquid coconut milk is not added. In some cases, alongside the frying oil you could heat some coconut until it turns to oil. This ensures that your pad prik king has that extra irresistible flavor.

For pad prik king, the paste is usually in a rich red color. The paste is thick too. This curry can be added to a variety of protein sources, for example, shrimp, pork, chicken or beef. However, if you are a vegetarian, you have the option of going for tofu instead of these other protein sources. If you don’t want any of these, then do away with them and instead, add some green long beans to the pad prik king.

According to history, this dish was served especially to people who would often travel for long distances. These were people such as soldiers. It was also prepared to stockpile. This worked because stir-frying proteins/ the meat in both curry paste and oil until it dries usually stops food from getting spoilt especially in hot weather conditions. It also makes the food tastier and easy to transport from one place to another. It would in the past be eaten alongside vegetables whose work was to tame the strong taste from chili. In other places, people would add some long beans to Prik Khing to make it generally easier to eat and enjoy.

There’s a bit of a debate when it comes to the names of this dish. Well, Prik is Thai for chili while king means ginger. However, note that this dish contains no trace of ginger at all.

Pad prik king is available in different varieties for example pad prik king moo, shrimp and vegetarian, among others. 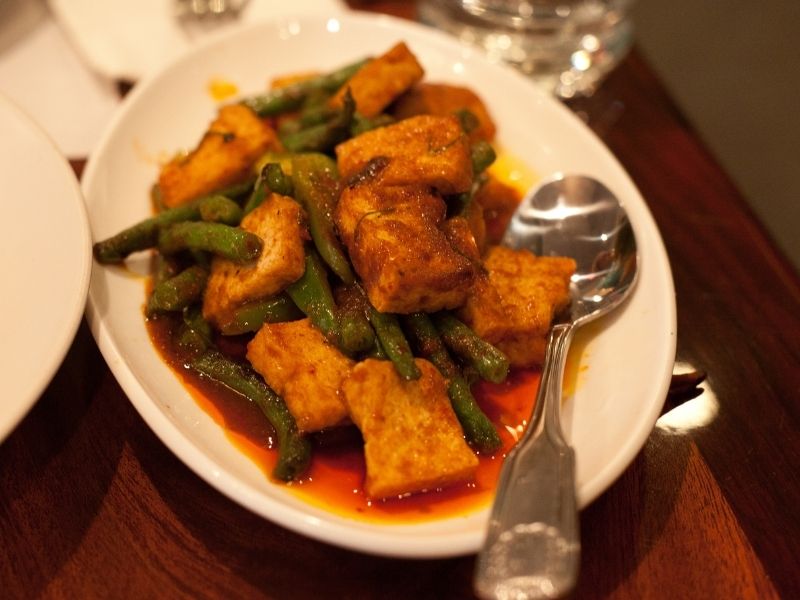 All these variations include curry paste. The main differences lie in the meat that was used in preparing them or the vegetables that were used in place of the meat. So you can always go ahead and choose what you love most for your pad prik king. Better yet, in case you love all these types and are one to try out different dishes, you can always try all of them at different times. That way, you’re not left out on anything at least as far as this dish is concerned. 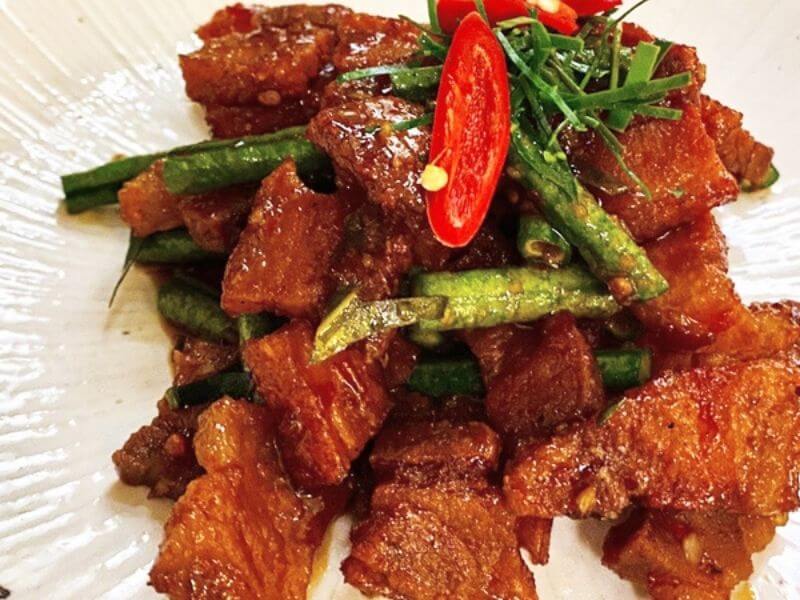 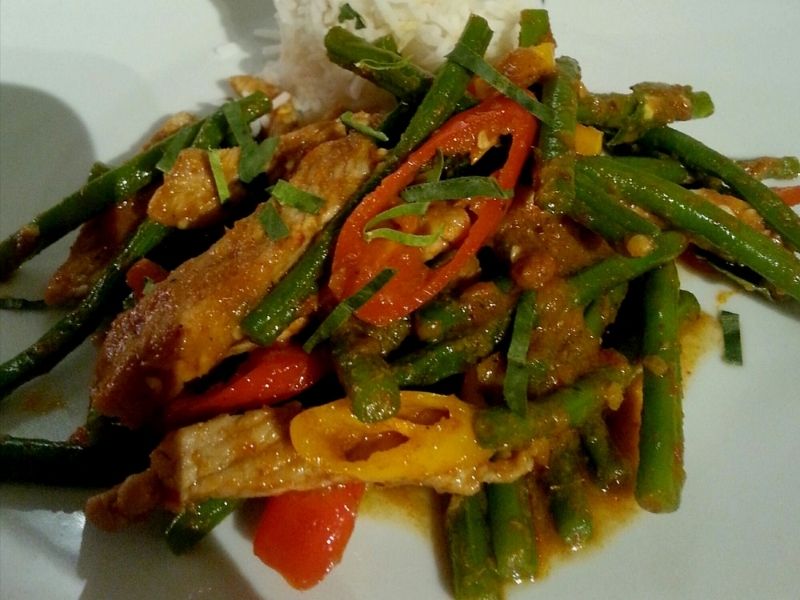 It is important to watch just how many calories get into your body. Failure to do so could easily lead to one being overweight or to other lifestyle diseases. If you are keen on watching your weight then you are interested in knowing how many calories you will be packing up from pad prik king.

Well, when you serve a cup of this dish, you will get 343 calories. This will include about 13 grams of carbs, 25 grams of fat and 21 grams of protein.  So you can go ahead and enjoy your dish knowing just how much you will need to burn if you are keen on maintaining a certain balance in your body.

As you can see from the recipe above, making this dish is not difficult. However, there are some tips that could help you make this dish even better. They include:

Thai food is best served spicy in most cases. The red curry paste, fortunately, makes food spicy but if you feel like it’s not enough, you can add some Thai chilies. If by any chance you feel like the curry paste is too much for you to handle a good solution is to add a tablespoon of brown sugar to it as this will help tone it down.

You should also keep in mind that there is a difference in the store bought red curry paste brands available. As such the amounts of sugar, sauce or garlic you use in preparing this dish will differ depending on the one you are using.

So, with all this information about the pad prik king, the recipe and a few tips here and there on how to make this dish even better, why not try it out sometime? Head over to your nearest grocery store and grab the ingredients then get to work. You really don’t have to make your way to its country of origin luckily but while you’re preparing it, how about you invite a friend or two so that you all enjoy it together like the Thai people do.