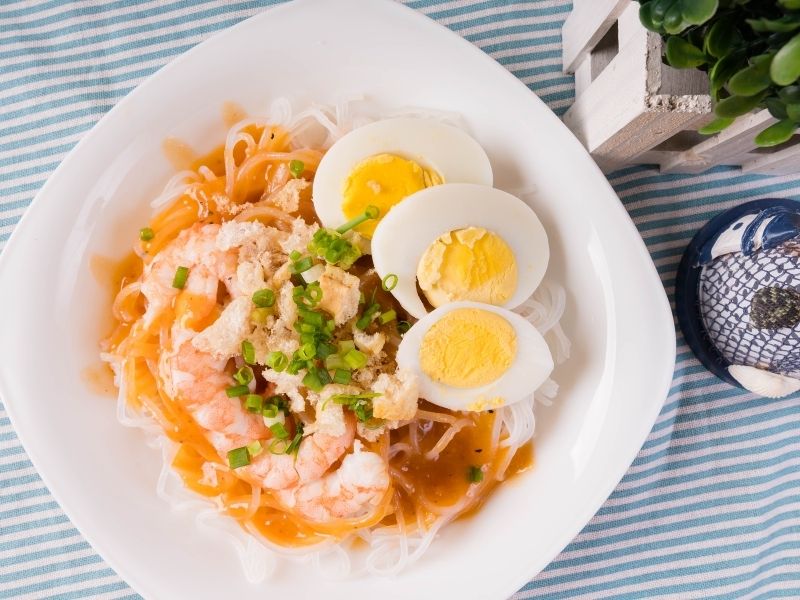 Palabok is a native culinary delicacy of the Phillippines, consisting majorly of thin-like noodles (rice) and an adorned sauce for added flavour.

These flavours can come as shrimp-garnished sauce and serve with a variety of toppings (meat, pork cracklings, shrimps, fish flakes, hard-boiled eggs, scallions and spices). A classic noodle dish with varieties based on the noodle type used in preparation and toppings, the noodle dish is a national meal in Filipino dinings, typically served on festive and special occasions.

As we get on with more about this dish, we will be highlighting the Palabok Malabon amongst other varieties of the noodle delicacy, the Palabok origin and history as rumoured to be influenced by both the Chinese and Philippines, as well as its recipe. 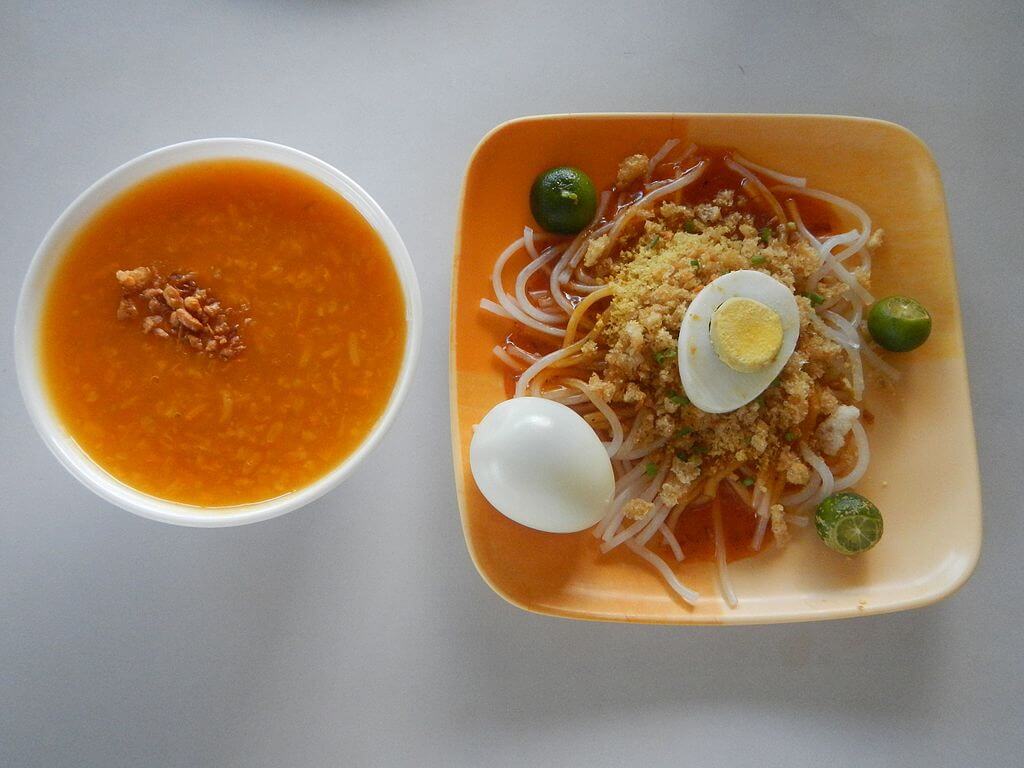 The alternative name of the Palabok dish is Pancit (Noodle dish). Palabok, in tagalong (a Philippine language), means “added flavour”. A delightful noodle dish with varieties prepared in festive, however, the origin of Palabok is not confined to a specific people (often attributed to the Filipino).

The actual origin of the Pancit dish is Chinese, although it is often referred to as Palabok due to the orange colouration of its sauce and the content of the sauce used to souse the noodles.

At the pacific island in the 9th century, Chinese merchants who moved over there were known to have travelled with their baon (a homemade dish) as they traded with the natives of the island (Filipinos).

This meal was referred to as Pancit, a Hokkien dialect of Fujian (spoken as pian i sit) which meant “convenient or fast food”. As their home meals got exhausted, the Chinese traders settled to improvise with the native rice noodles as an alternative to their wheat.

This trial gave way to a new discovery, as it became known that rice noodles were easier to prepare than the Chinese wheat noodles, and were great for serving with various toppings and sauces. This array of noodles became known as pancit.

During the Spanish colonization (also known as the Spanish occupation) of the Phillippines (1520-1898), the noodle dish quickly became the takeout meal sold by Chinese hawkers to factory workers who had little to no time for housework or meal-making.

From hawkers, vendors on the roadside to the eventual setup of early restaurants in Manila (Phillippine’s capital) called Panciterias, the epicentre at the time was Binondo (the oldest Chinatown which was allocated to Chinese immigrants into trading as early as 1594). These panciterias became  Phillippine’s first restaurants serving workers and travellers.

Over the coming years, the noodle dish became widely accepted, with each region in the Phillippines taking on a distinct taste for preparing their noodle dish. By the 1920s, a Chinese immigrant, Ma Mon Luk made Manila’s homemade variation of the pancit, called pancit mami.

The dish consisted of wheat noodles doused in chicken broth with toppings of steamed pork buns (siopao), beef, chicken and pork. North of Manila, was a fishing town whose pancit was made with boiled egg noodles and garnished with shellfish, their dish was called the pancit malabon.

Pancit bihon (Hokkien term meaning rice vermicelli) as called the Pancit Guisado, uses rice sticks with chicken, vegetables, chicharron and pork. Then we also have the pancit palabok, served as steamed noodles topped with a shrimp sauce set with a variety of meat and kinds of seafood with achuete powder added for its orange colouring. 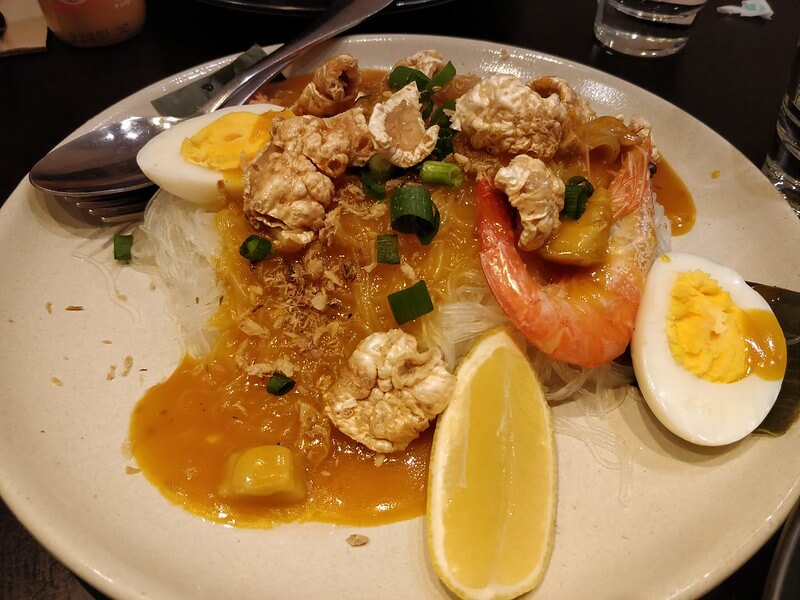 Alternatively referred to as the Pancit Malabon, the stir-fried dish is a type of pancit that originates from the Malabon city of Metro Manila in the Philippines. Formerly called pacit bame, it was renamed in the 1900s after some visitors stopped for food in the town and discovered the town’s specialty to be different from other noodle dishes they had tasted.

In the fishing town of Malabon, the delicacy is served as white thick rice flour noodles stir-fried in an orange-yellow sauce containing the achuete powder, fish sauce (flavoured patis), some crab fat and shrimp broth.

Of course with the town’s common occupation, the pancit malabon is known for its seafood toppings which are mainly cooked oysters, shrimps, mussels, squid and smoked milkfish. Extra toppings include pork rinds, vegetables (green onions and sauteed garlic which were either minced or ground), hard-boiled eggs (hen or duck), pork and some calamansi or lemon wedge juice. 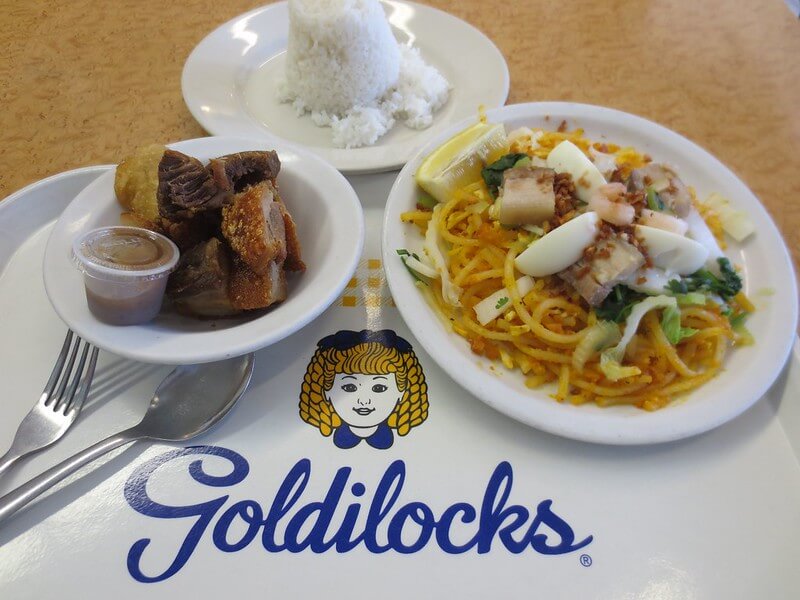 Palabok Pancit and Other Different Varieties

Aside from the above-discussed types of pancit, there are varieties of pancit savoured by the locals such as canton, bihon, and sotanghon. Although there are exceptions, the name given to these types of pancit are often either based on their place of origin ( pancit malabon), their colour (pancit puti/white pancit), how they are eaten (pancit habhab), where they are sold (pancit istasyon, and who first made the meal (pancit henoy).

The following are some of the pancit delicacies celebrated across various regions/province in the Philippines.

Although the name of the dish isn’t attributed to Canton, China, the dish is widely popular in the Phillippines. The wheat noodles are stir-fried in a ginger and soy sauce, garnished and tossed with squid, sliced pork, tinted quail eggs (neon-orange), vegetables and shelled shrimp.

Translucent glass noodles (sotanghon noodles) are sauteed in a sauce with bevvy toppings, which are served on special occasions only.

The name Luglog, refers to how the noodle dish is being prepared, which means “to dunk in liquid”. The thick rice noodles are boiled in water, mixed with achuete sauce and garnished with fresh seafood (oysters, squid and shrimp) from Malabon city, hence why it is often referred to as pancit malabon in some circles.

This dish is named after the ways eggs are being used to top the meal. The Miki noodles used, are stir-fried with bean sprouts and carabao beef garnished with a fried egg called “patong” and served with batil, a whisked bowl of egg-drop soup. Hence we have the Batil Patong noodle dish.

This noodle delicacy is a combination of translucent noodles with fresh Miki, flaked chicken, pork, shredded adobo meat and tender vegetables oused in a flavoured broth. It is considered a great dish for dinners and special occasions.

Originating from Lipa, Batangas in the late 1960s by a restauranteur, To Kim Eng, the pancit dish has its own festival day every June (Lomi festival). A dish of Lomi contains fat egg noodles, fish balls, quail eggs, pork liver and kikiam, all doused in a thick broth topped with whisked egg. A special dish celebrated especially on the capital’s foundation day in Batangas.

In Lucban, the way their pancit dish is placed on a banana leaf and the leaf squeezed delicately to deliver the pancit into one’s mouth, gave the dish the name “Habhab”. This dish contains Miki noodles sauteed with a portion of cane vinegar, vegetable, liver, shrimp and pork meat.

This pancit meal offers sauteed rice noodles. It uses thin rice noodles sauteed in a pan containing soy sauce, vegetables and meat. Its name refers to the root word “guisa” which means sauteing, the process by which the meal is prepared. 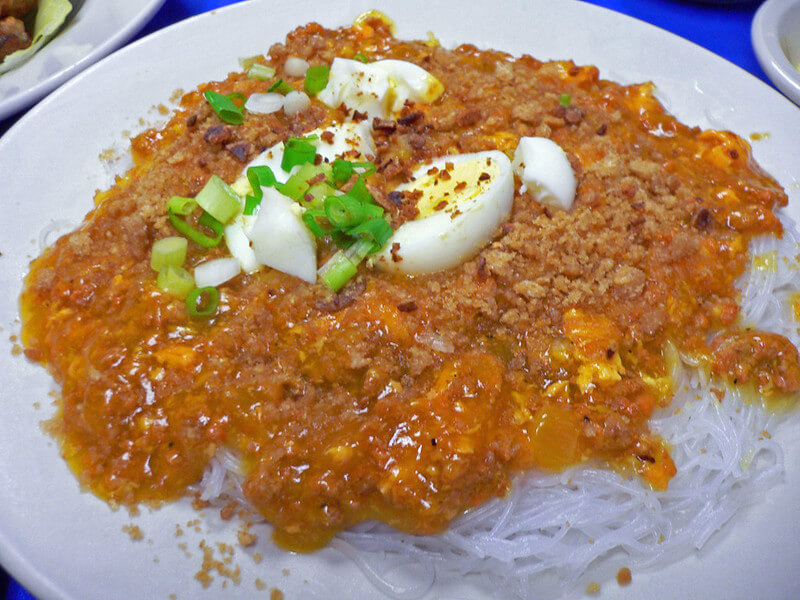 For our Muslim food-lovers, having a halal version of the palabok noodle dish is great especially during the revered Ramadan period of 30 days. We are delighted to share a healthy version so you don’t miss out here.

Sisig – A Pinoy Must Try Delicacy [Origin, Curiosities and Recipe]