Kishka, also known as stuffed derma, refers to intestine or gut in East Slavic languages. This sausage is a Jewish starch dish served at Passover or any time of the year. Kishka also refers to varieties of sausage or stuffed intestine, with spices prepared from a combination of meat and meals, often a grain. This preparation is packed into kosher beef intestines, then cooked and roasted, and the meal is ready.

The dish is common across Eastern Europe, as well as with close communities from those areas. It is also served by Ashkenazi Jews, who dish their variety according to kashrut dietary laws. This dish will be tasty if someone can get past their dislike of consuming blood; the amusement in the flavor and taste of simmered Kishka is a very good experience.

Typically it was devoured grilled with onions and dished with pan-fried potatoes and scrambled eggs. The traditional blood sausage is served in multiple regions, and it is very similar to Boudin Noir and Black Pudding.

Known as a conventional Jewish Ashkenazi food, it is often cooked inside the Shabbos cholent (stew) and practiced by those from the Polish environment. What is Kishka Made Of

The central ingredients are matzo meal, fat, and spices, but some other cultures use different fats or spices and even vegetables. This recipe comes with various options, even for vegetarians, and is easily cooked with a food processor. In recent cooking, artificial casings are often used instead of the beef intestine. This cooking is a popular improvement to Ashkenazi-style cholent.

Once the variety is cooked, it can be frozen for later use in cholent, sliced and dish out with gravy, stuffed inside the chicken breast, or even taste better as a burger topping.

Kishka is a tremendous Ashkenazi delicacy that can be consumed on its own, or served with beef, prepared in the cholent for Shabbat. A cholent Shabbat is a Jewish cuisine item, like a jellied calf’s foot (Pacha). Kishka is Yiddish, but different eastern European languages have a related word for intestines: Kiszka in Polish and Kishka in Ukrainian or Russian.

In recent years, Kishke has entered American English as a synonym for guts, still bearing the connotation associated with Yiddish culture.

Generally considered traditional Jewish food, this sausage is served in many regions with an edible artificial casing and replenished with a mixture of ingredients. In the Russian region, the sausage is commonly prepared with flour, butter, and spices mixture. After which it is boiled in a chicken broth. The chicken broth is jammed into a chicken coat casing gotten from a chicken’s neck.

When served as a Polish-American sausage ( Midwestern United States), often referred to as Kishka, its common ingredients combine blood, beef, and barley prepared into a sausage often dish for breakfast. Crossing to the Hungarian sausage, Kishka contains rice and a sundry of ingredients. This sausage popularity has gained it many names in different cultures such as Kiska, Kiszka, Kiske, derma, and stuffed derma. The stuffed wurst is mostly placed on top of the Shabbos cholent (stew) and broiled overnight in the same pot. It is sometimes cooked in salted water mixed with vegetable oil or baked in a dish and served as a single dish with flour-thickened gravy, which is gotten from the cooking liquids.

Another Eastern European kishka dish is known as kaszanka, a blood sausage prepared with pig’s blood, barley, or buckwheat; it is then stuffed in the pig intestine. This simple dish is traditionally served at breakfast like the black pudding. Other Eastern European dishes you would love to check out include kielbasa, pierogies, Chaloupka, porcupine meatballs, and kolache.

A different way of serving Kishkas is with organ meat, such as the liver and assorted grain stuffings. The cooked Kishka can vary in color from grey-white to brownish-orange; this coloration depends on the amount of paprika mixed and the other ingredients used.

Around the Greater Białystok Area Kiszka, Kishka is customarily served in a way identical to the Jewish Kishka (80% of the residents of Bialystok before World War II were Jewish), but in most cases, ground potatoes are the main ingredient which is stuffed in the pig intestines. Many civilizations consume blood as food, frequently in combination with meat. The blood may be in different forms such as blood sausage, a thickener for sauces, a cured salted form for times, or a blood soup.

Although Kishka is considered to contain a lot of fat and cholesterol, especially when stuffed in pork. The sausage made from pork is rich in riboflavin, vitamin C, protein, iron, phosphorus, and other minerals. Besides, the blood is easy for the body to digest and absorb. It also contains a special quantity of lecithin, which can prevent the toxic effects of low-density cholesterol.

Non-vegetarians can also consume the Kishka by simply using the vegetable recipe. 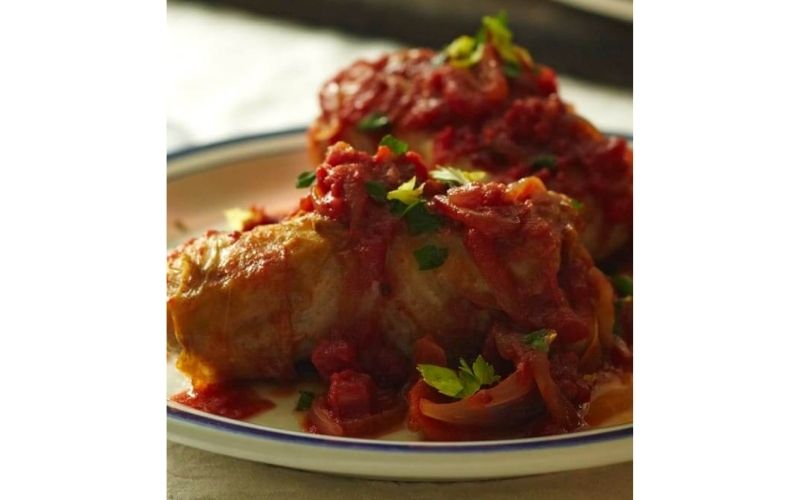 As blood is often used as an ingredient, kishkas are considered an acquired taste. Kosher kishka recipes omit animal blood and pork products.

For more convenience, it is encouraged to use a large jelly roll pan with foil. Tear 2 sheets of parchment paper and two sheets of foil depending on the number of people you serve.

Where To Buy Kishka

When visiting the United States, Kishka can be easily purchased in restaurants and grocery stores that operate in the Polish and eastern European ethnic/immigrant communities. You can also buy this sausage in Philadelphia or Polish restaurant and grocery store Polonia in Houston, Texas. There is an extension of the restaurant where sausage can be purchased, located by the corner not far from the restaurant. Many mail-order companies and delis have been established to sell various kishkas. The ready kishkas are sold in most kosher butcheries and delicatessen, while in Israel, it is being bought in the frozen-food section of most supermarkets.

Kiszka can be consumed in multiple ways, whether cold or heated; cooked entirely on a grill or nonstick skillet; chopped into rounds and fried, or extracted from its casing and heated hash. This sausage is made with blood, knowing that most cookeries worldwide have comparable dishes like the French haute cuisine.

I hope you enjoyed this Article, check another very popular article on Middle East Food Dolmades