Japanese Noodles – Discover all of them, Curiosities and Varieties [with Recipes] 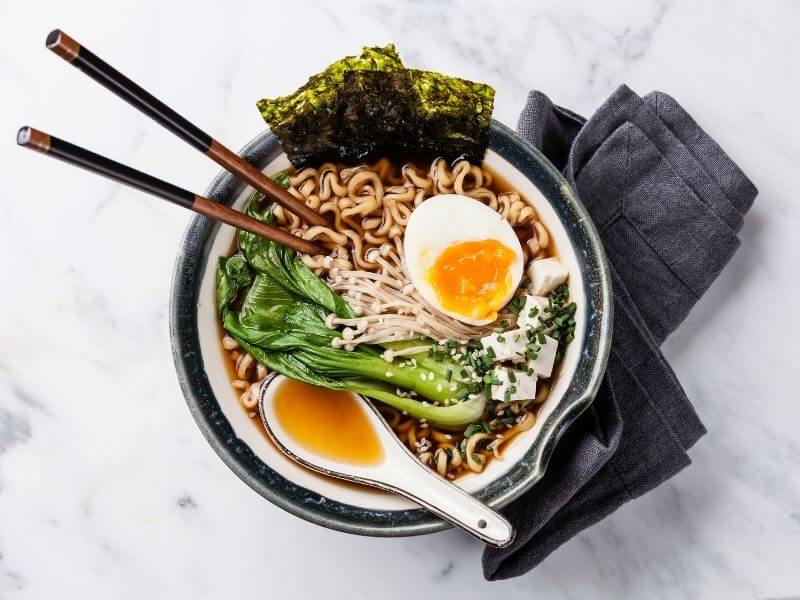 Japanese cuisine is not fully defined without its special noodle delicacies. Their popular food is an easy make that’s enjoyed with salads stir-fried or with varieties of dipping sauces. Japanese noodles make varieties of dishes differentiated by the types, sizes, or form of the noodles used during preparation, the toppings, and the way in which they are served (with dipping sauce, in hot broths or soups); from Ramen to Udon, we will be highlighting the most popular types of them all.

Going further, we will be run-through the seven different types of Japanese noodles with a focus on the recipes for two popular types, Udon and Ramen noodles.

We will also be touching down on the history of the Japanese noodles while clearing the air on the involvement of the Chinese in its true origination. 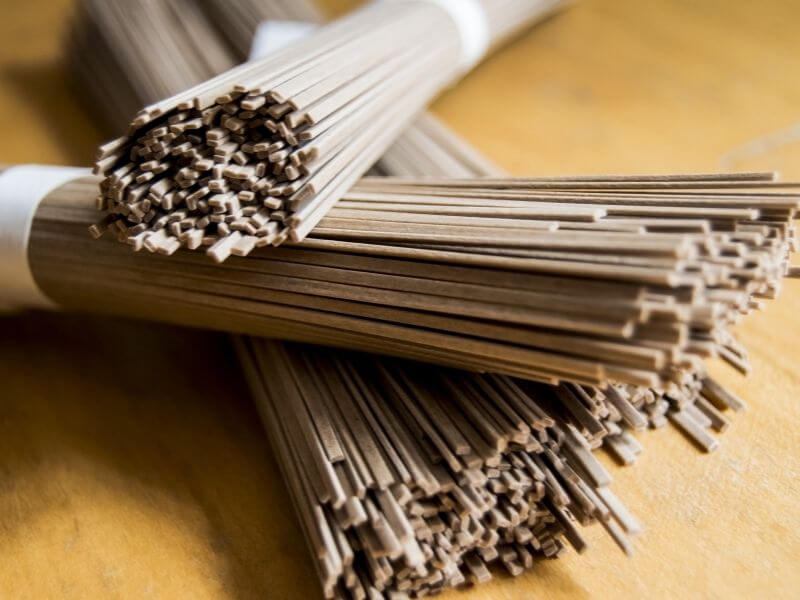 It is believed that in the early 19th century, Chinese restaurants were popular for their noodle dishes served with toppings as hot broths. On reaching Japan, immigrants introduced the culture by setting up food stalls that served their Chinese wheat noodles, till the noodle dish became popular by 1910.

However, following the end of World War II, Japan had a record of low rice supply in harvest and production, because rice production needs during the war was met by other Asian countries.

The US met the demand, by flooding the Japanese market with low-priced wheat to meetup. By 1948, there were three times more wheat-made food products such as bread, and hence wheat-based noodles introduced (such as the Ramen, Soba, Somen, Udon, and Hiyamugi).

With support from food firms, local vendors of the noodles multiplied giving prominence to the adaptation of wheat-based noodles within their rice-based culture.

Another contributing feature was Taiwanese-Japanese Nissin founder Momofuku Ando’s invention of instant noodles, which enables diners to easily prepare their noodles in just two minutes with the addition of boiling water.

This took Japan’s Ramen instant noodles global across different continents, sold under different brand names. By the 1980s, Ramen was a national favorite in Japan with varieties, so much that in 1994 it had a museum named after it in Yokohama.

To date, Ramen among other popular Japanese noodles is sold by several vendors around the country with only its capital hosting over 5,000 noodle vendors. 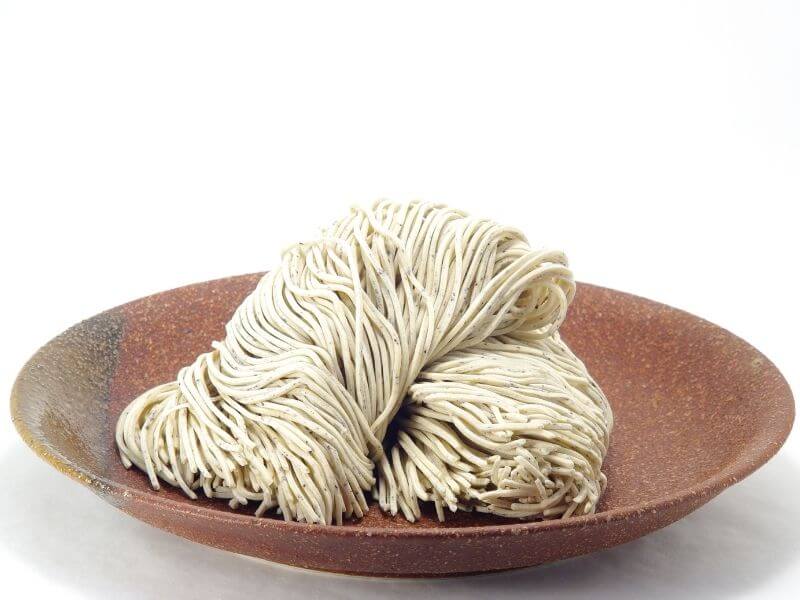 Although there are varieties of Japanese noodles with each specific to a region or vendor, we will be highlighting eight of the most popular types of noodles below.

This noodle type is the most popular noodle variety in Japan. A thin curled noodle of yellow coloration, it is made from wheat, Kansui, water, salt, and alkaline water, although the noodles can be imported from China (Chinese soba).

Once prepared it is served with a variety of soups (Miso ramen, Shio ramen, Shoyu, Tonkotsu) which defines the flavor it gives off and the color of the dish. These soups are made from mushrooms, pork, onions/garlic, or chicken stock.

Udon noodles are the fattest of the noodles, made from wheat with white coloration and often served with dip sauce or as broths with green onions or Kamaboko slices. It has about seven types differentiated by their toppings and soup such as:

The somen noodles are wheat-based thin noodles served in both winter (as nyumen) and summer. During the winter they serve it as a hot soup, nyumen, while in summer it is served cold with ice and a tsuyu dipping (a sauce type with ginger, Katsuobushi, and onion).

When served in summer, it is served in a flowing soup, where diners have to catch the noodles with their sticks and dip in their tsuyu sauce to taste. 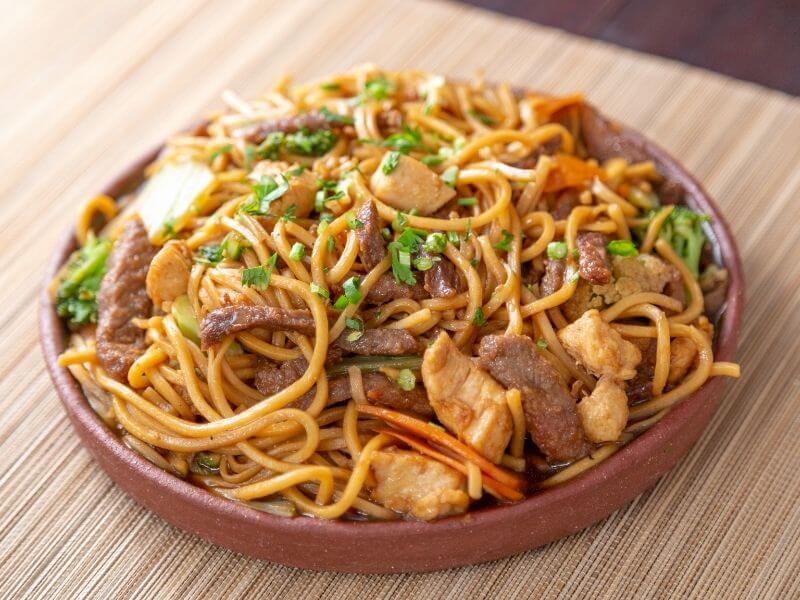 Buckwheat is edible noodles that can be served cold or hot like the Udon noodles. Often served as a main meal on Japanese New Year’s Eve, Zaru soba is the cold form of soba, served with dipping (tsuyu), green onions, and nori seaweed.

Although grated daikon, yamaimo and tororo are common toppings used for cold soba, Tempura and mountain veggies (sansai) are used for the hot soba. It is also a common practice for diners to drink the soba stock left with the tsuyu dipping sauce.

For quick reference, Yakisoba differs from soba but its content and preparations process. It is made from wheat flour and prepared by simply stir-frying similar to Ramen noodles prepared with some veggies, and seasonings added (yakisoba sauce, pepper and sauce). Common toppings have included, green seafood powder,  shoga beni (red picked eye.), bonito flakes and more.

Light white wheat-based noodles, not as thin as udon but served in similar ways to the Somen and Udon. So we can have Hiyamugi in its cold or warm forms, served with similar toppings highlighted earlier.

Made from potato starch, these translucent noodles are often served with salads and a variety of sizzling dishes. It is the most popular glass noodle among Japanese noodles.

The favorite of the noodles for stewed dishes (nikujyaga, sukiyaki) in Japan. Shirataki is made from Konjac yam and is widely preferred for its low carb and calories content, as well as its high dietary fiber content. 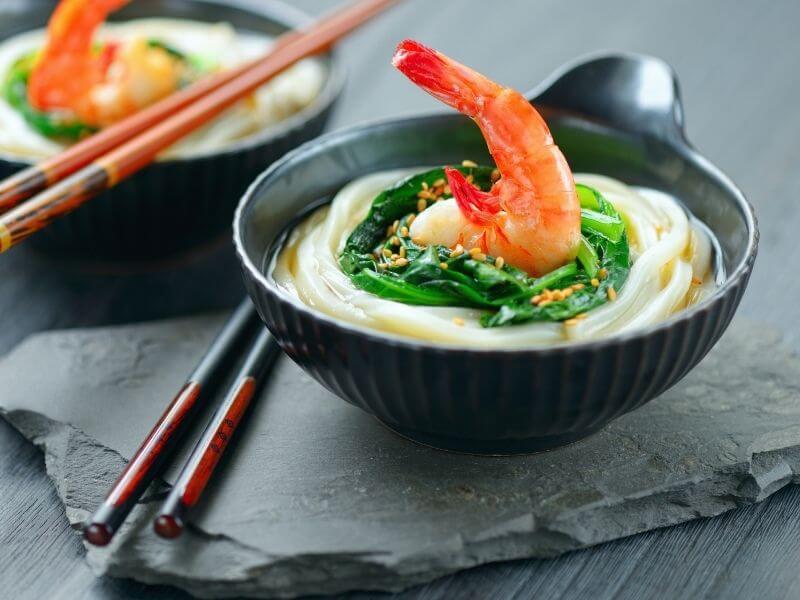 In just 25 minutes, you will have a protein-rich and vegetable seasoned meal. Choices vary based on proteins, vegetables and toppings preferred.

When serving, garnish with Bonito flakes, green onions, and some Beni shoga (if you would like). Enjoy! 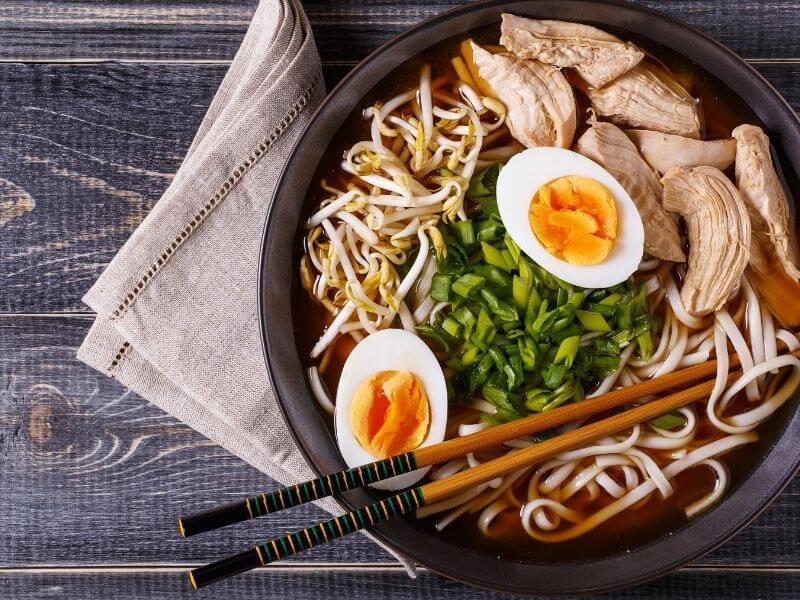 This Miso Ramen (soybean paste) recipe is a flavor of pork and chicken broth with Ramen egg and Chashu, all-in-one prepared within half an hour.

Toppings should be ready and placed aside: A sheet of nori, chopped green onion, Chashu, ramen egg, spicy & blanched bean sprout, shiraga negi and corn kernels to go along with some white paper and red ginger and chili oil (optional).

Chicken Katsu – The Japanese Style of Crumbed Chicken [with Recipe]

4 thoughts on “Japanese Noodles – Discover all of them, Curiosities and Varieties [with Recipes]”