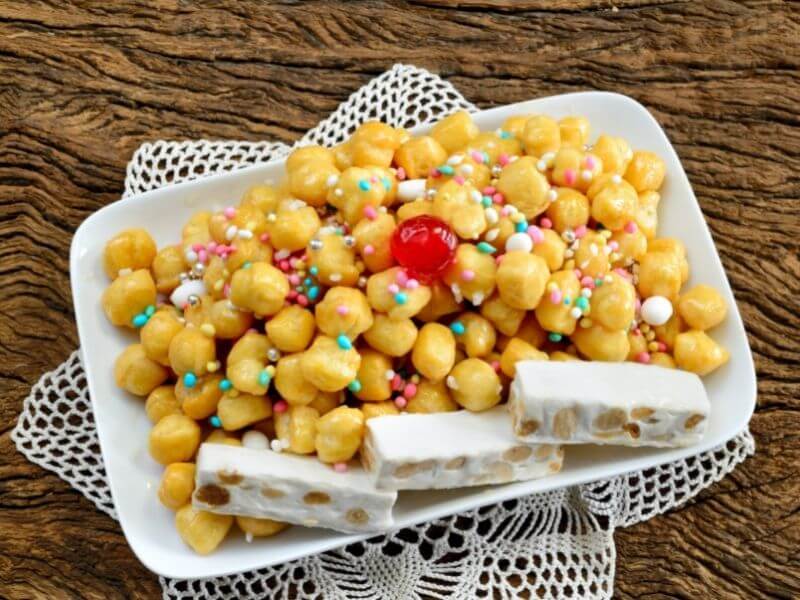 Southern Italy is incredibly rich in delicacies numbers, going from Appetizers to Desserts, Struffoli is possibly one of the Very Popular Sweet Treats that cannot absolutely miss from Christmas Families Tables in Naples. Not very popular outside Italy, here i am going to make you discover one of the most appreciated sweets of my childhood. 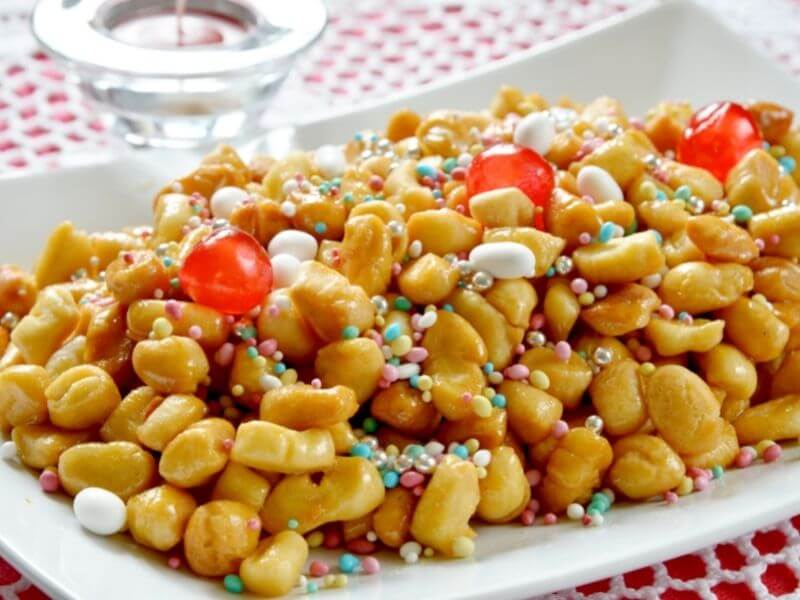 The etymology does not change the result: struffoli are the most Neapolitan sweets that exist. On a par with the sfogliatella and the famous pastiera, and certainly more than the baba, of Polish origin. Many also attribute the name to the fat with which they are made and in which, at one time, they were fried: lard (in Italian Strutto).

Speaking of historical recipes and remembering that Campania and Sicily belonged to the Kingdom of the two Sicilies, struffoli are also found in Palermo but with some small variations and the first substantial is the loss of an f, in fact there they call them “strufoli”.

Whatever its history, one thing is certain: at Christmas time, wherever you go, you eat struffoli and they are definitely an inevitable part of the Christmas holidays: there is no house where there are not them, the kings of the Christmas table.

Struffoli is an ancient recipe, which is handed down in families, whose custom is to gather in the days before the holidays to prepare it all together! 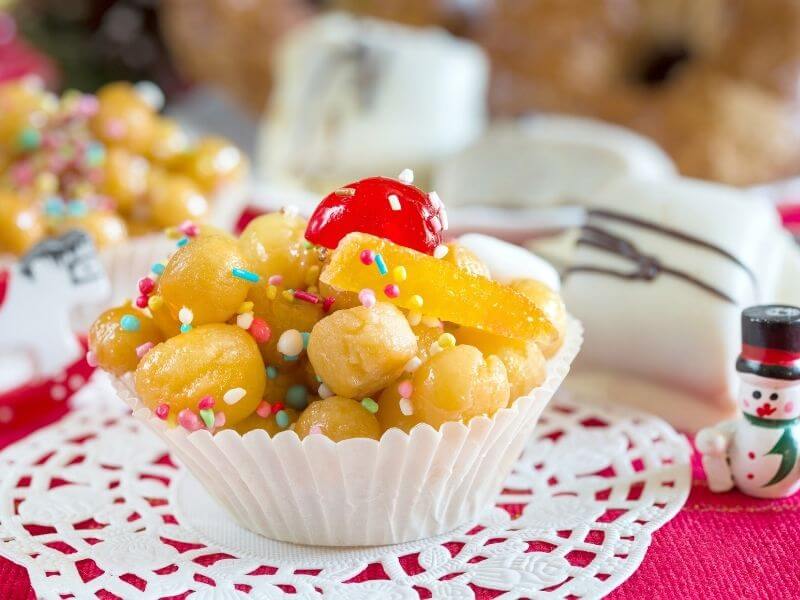 Who invented Struffoli? Not the Neapolitans, despite their proverbial creativity. Apparently the Greeks brought them to Southern Italy in the Gulf of Naples at the time of Parthenope. And from the Greek would derive the name “struffolo”: precisely from the word “strongoulos”, rounded.

Also in Greek, the word “pristòs” means cut. By assonance, a “strongoulos pristòs”, i.e. a round cut ball: i.e. the struffolo, in Magna Graecia has become “strangolaprete”: the name given to super-compact dumplings, able to “choke” the greedy members of the clergy.

Since the lack of certainties stimulates the imagination, someone else has suggested that the name struffolo derives from rubbing in italian: the gesture made by those who work the dough, to roll it into a cylinder before cutting it into balls. There are also those who mistakenly believe that the struffolo is called this way because it “rubs” the palate: in the sense that it tickles it, for its goodness.

And who even thinks that the root of struffoli is to be connected to the lard (the type of fat with which they were made and fried in ancient times) If it is not yet clear from which etymology – nor from which region – the struffoli come from (there are also those who give birth to them in the Middle East), it is conversely very clear where they go: first in our bellies, and then on our hips (i have swallowed too many).

Their path is also well known: the struffoli have gone all over central-southern Italy. Two famous cookery treatises of the 1600s, Latini and Nascia, mention as “strufoli – or even struffoli – alla romana” sweets prepared in the same way as Neapolitan struffoli.

In Umbria and Abruzzo Region they are called cicerchiata, because the balls of fried pasta tied with honey are in the shape of chickling peas: legumes that it is better not to eat because of their poisonous seeds that can cause paralysis and hallucinations (in certain areas of Italy, “what, you ate chickling peas?” is equivalent to saying “do you have the cicerchiata?”).

So, two names (struffoli and cicerchiata) for the same dessert. But also the opposite: two different desserts with the same name. Struffoli, in fact.

The inhabitants of Tuscia, a region around Viterbo, still call struffoli the soft and light dough pancakes that elsewhere are called “castagnole”, and are eaten at Carnival. 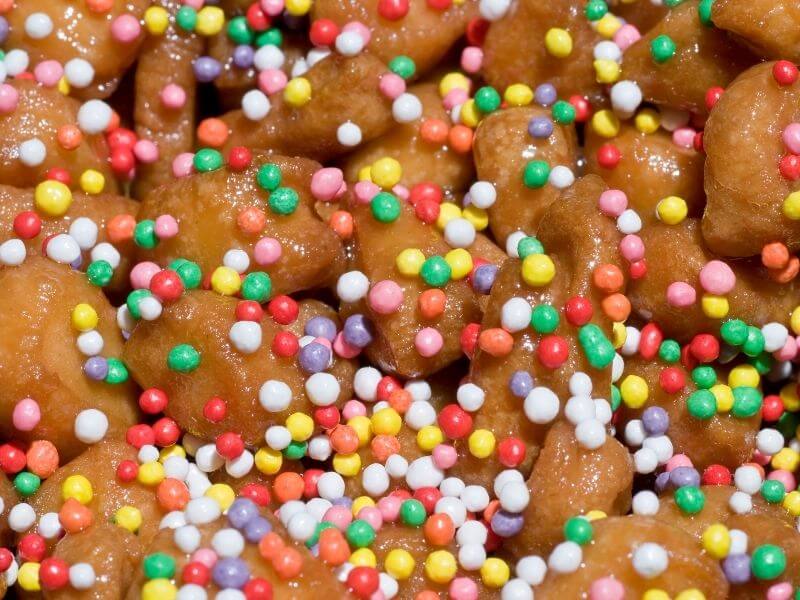 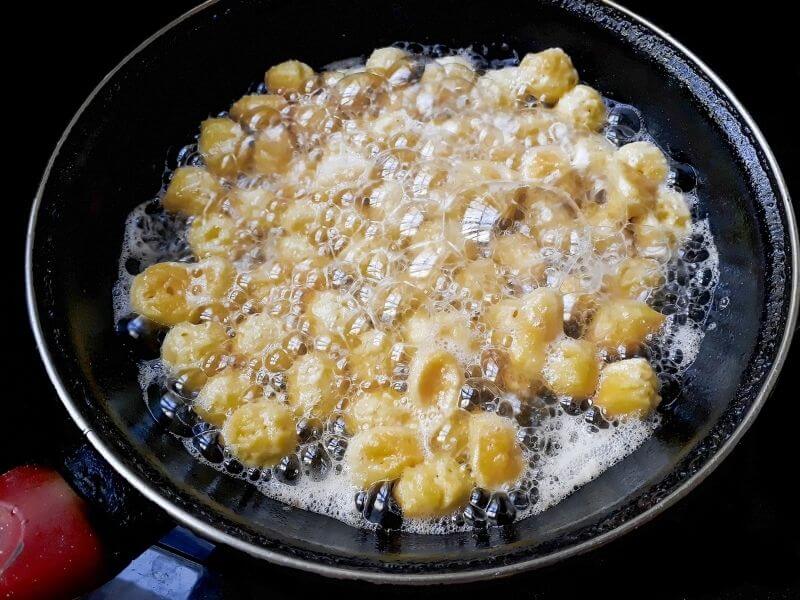 Let’s get to the preparation of this delicious dessert. From the ingredients to the processing, everything is studied to perfection, even the fantastic aroma that envelops the house when frying these small balls.

But why does the real Neapolitan Struffoli have to be small? Because this is the only way to increase the surface of the dough that is embraced by the honey, thus gaining in flavor and quality.

One of the secrets for a successful outcome is honey: it must be abundant. Beyond its goodness and sweetness, honey also has religious significance. Its origin lies in Greek mythology: it represented a food often identified with the same ambrosia, the precious liquid with which the gods of Olympus used to feed themselves.

The Bible, instead, tells that Samson, after having extracted from the corpse of the killed lion a honeycomb of bees and honey, pronounced the sentence “From the devourer came out the food, from the strong came out the sweet” (which means “from death comes life”).

For this reason the body of the Child Jesus is called the “honey-giving rock”. So it’s no coincidence that the Struffoli are a typical Christmas cake.

But in addition to honey, another important secret is to keep in mind all the ingredients to use; in the struffoli there are no accessory elements, everything is important, from candied fruit to “small devils pearl” to candied pumpkin (the famous “cucuzzata” which is only found in Naples).

In ancient times struffoli were prepared in convents by the nuns who then gave them at Christmas to noble families who had distinguished themselves for acts of charity.

Today they are prepared in every house in Naples and other regions of Italy during the Christmas period. Although each family has its own recipe handed down from father to son, the basic ingredients and general preparation are similar from region to region.

Here is the original recipe from the Neapolitan tradition.

Could I bake them in the oven since I can’t eat a lot of fried things?

Yes of course, it won’t be the same, but it’s fine in the oven, just make sure are enough covered with canola oil spray. 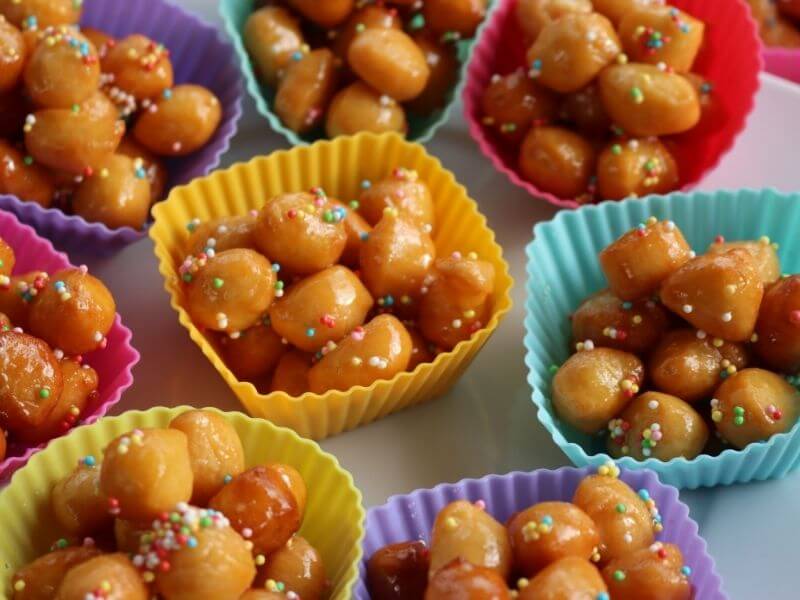 How long do Struffoli stay fresh?

You can put Struffoli inside a big bell or ball for sweets and keep them for a week with no problem, otherwise, you can store them in the fridge too.