Have you ever tasted the flavors of Laos? If not, then you’re in for a real treat! As someone who has had the pleasure of trying Lao cuisine, I can confidently say that it is some of the most delicious and unique food I have ever tasted. Located in Southeast Asia, Laos is surrounded by countries with their own distinct culinary traditions, and this is reflected in the diverse and flavorful nature of Laos food. One of the most popular dishes in Laos is larb, a spicy meat salad made with minced chicken, pork, or beef, mixed with herbs and spices. It’s a dish that packs a real flavor punch and is sure to tantalize your taste buds. But that’s not all – other must-try dishes include tam mak hung, a spicy papaya salad, and khao piak sen, a chicken noodle soup. Today i am not talking about Larb, instead another dish that i really like wich is Khao Poon.

To be honest the real star of Lao cuisine is sticky rice, a staple that is often eaten with meals and can be molded into small balls to scoop up food. It’s a unique and delicious way to enjoy a variety of dishes, including grilled meats and vegetables. And let’s not forget about the fresh fruits and vegetables that are abundant in Laos – eggplants, cucumbers, tomatoes, and green beans are just a few examples of the delicious produce you’ll find in Lao dishes.

Overall, Lao food is a true delight for the senses, with a focus on fresh ingredients, herbs and spices, and the use of sticky rice as a staple. If you haven’t had the chance to try it yet, I highly recommend giving it a taste. Trust me, you won’t be disappointed! 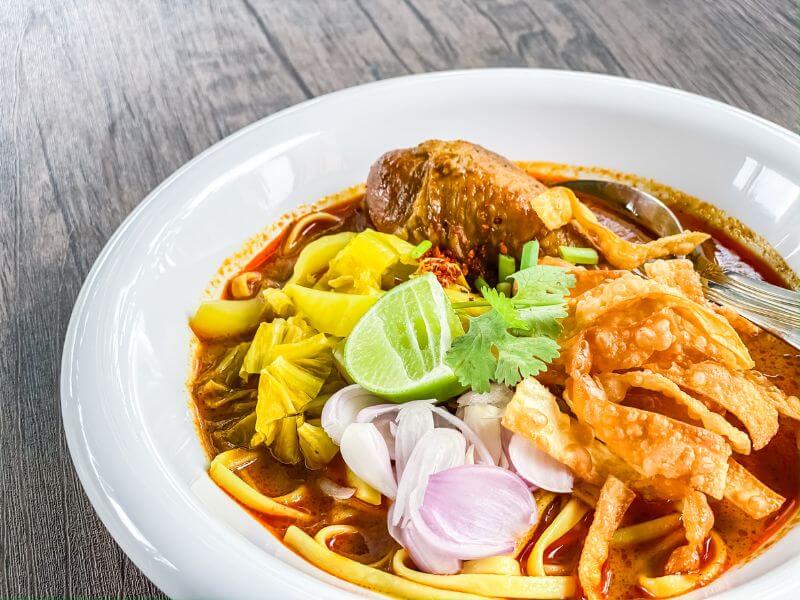 Khao Poon is a traditional Laos noodle curry soup. It also goes by other names including, Kapoon, Khao Pun, Khao Poun, Khaub Poob, Laksa, and Lao royal vermicelli coconut curry soup. There are many varieties of this soup found in Asian countries like Vietnam, Cambodia, Thailand, Malaysia, Singapore, and Indonesia. More recently, the popularity of this dish has spread to other corners of the world including the US.

The word “Khao or Kao” refers to rice. This is because the noodles used in the dish are made from rice. “Poon” is a word that translates into “everything”. The name, therefore, translates roughly as “rice and everything”. Once you taste Khao Poon you will realize the aptness of this dish. It is simply bursting with textures and flavors.

Although the soup is a traditional Laotian meal, it also has influences from other countries. The base of the soup is vermicelli noodles. These are made from fermented rice that is then pounded and formed into noodles that are thinner than spaghetti. The making of noodles was probably brought to Laos by Chinese traders long before the coming of Europeans.

In some households in Laos, rice vermicelli is still made in the traditional way where the fermented rice dough is forced into holes made in a tin. The stings of dough formed are then boiled to make the noodles.  Various vegetables and sauces are then added to make the soup. One particular sauce that is popular in Laos is the

The coconut curry in Khao Poon probably has an Indian background. The Lao Lan Xang kingdom traded with Kher and Indian traders as early as the fourteenth century. It is also possible that the spicy curry is a Buddhist influence, introduced by Buddhist monks, much earlier.

By the time the French arrived in the 1800s, Khao Poon was being sold in the marketplace. In the handwritten recipes of the royal chef, Phia Singh (1898-1967), there are several varieties of Khao Poon included. The red and golden colors of the curry are also the colors of royalty in Laos, hence the alternative name of Khao Poon: royal vermicelli curry soup. 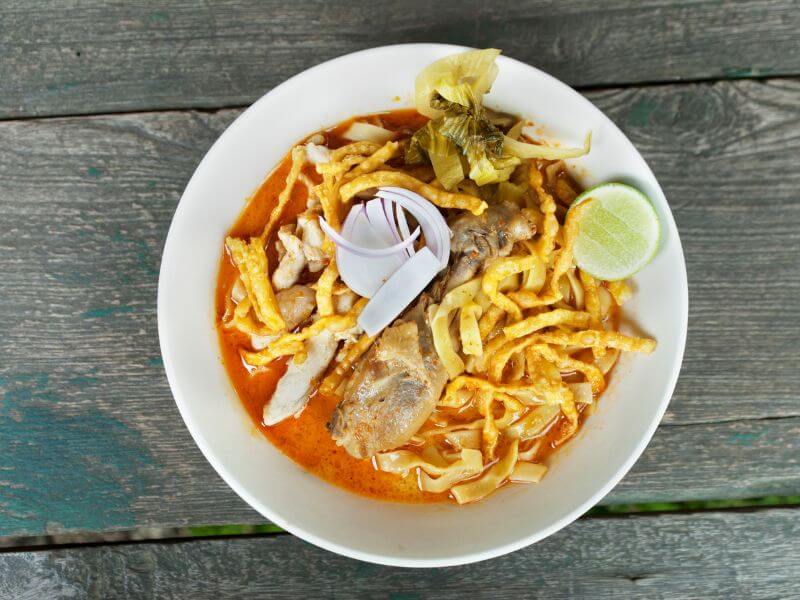 Making your Khao Poon requires you to use rice noodles. But how do you pick the correct noodles that will create authentic Laos cuisine? In Laos, noodles can be made from rice, tapioca, or a mixture of the two. Other ingredients used in making noodles include wheat flour, bean starch, and eggs.

Noodles in Asia also have different sizes, shapes, and lengths. Different meals can also determine which noodle is cooked. Yes, noodles can be taken at breakfast, lunch, or dinner.  When buying your Khao Poon noodles, be sure you purchase the right ones. Some of the noodles from Asia you might come across are: 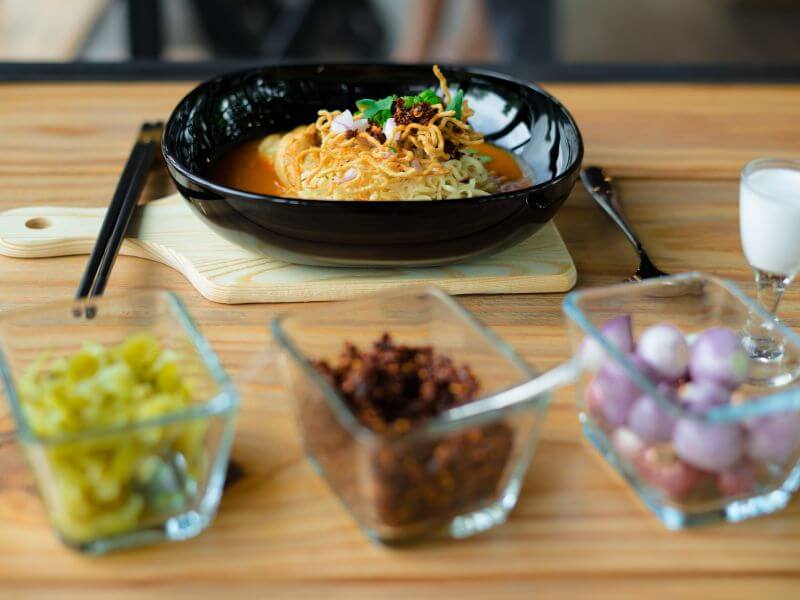 To begin with, the Lao Khao Soi should not be confused with the Khao Soi that is prepared in northern Thailand. The Thai Khao Soi is prepared using egg noodles and is influenced by Chinese Muslim cuisine. With the Chinese and Burmese influence, the curry is more pronounced in this soup compared with the Lao Khao Soi. In addition, beef is the meat of choice in the Thai Khao Soi.

In Laos, Khao Poon and Khao soi have distinct differences. For starters, your Khao Poon vermicelli is made from fermented rice dough. This gives the noodles a distinctive slightly sour taste.  Furthermore, the noodles are sticky and thinner than regular spaghetti. Khao Poon is used in lettuce or rice paper wraps that contain varied sauces, meat, and herbs.

In Laos, Khao Poon is made daily and sold fresh. When making Khao Poon soup, there are several varieties you can try out. These include Khao Poon with or without coconut milk, using kaffir leaves, or choosing between pounded chicken, pork, or fish for protein.

Khao Soi, on the other hand, uses big hand-made noodles that include eggs. Curry and coconut milk are common ingredients in Khao Soi. This makes it creamier and spicier than Khao Poon. However, because the latter soup uses more herbs, it is usually more aromatic. 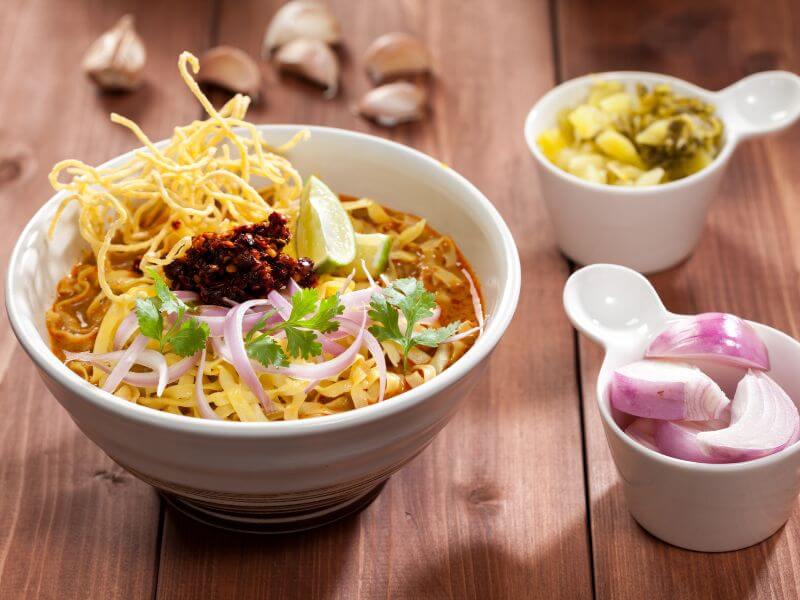 Before preparing your Khao Poon soup, you should be aware that the dish does not take a lot of time to prepare if you have all the numerous ingredients ready. 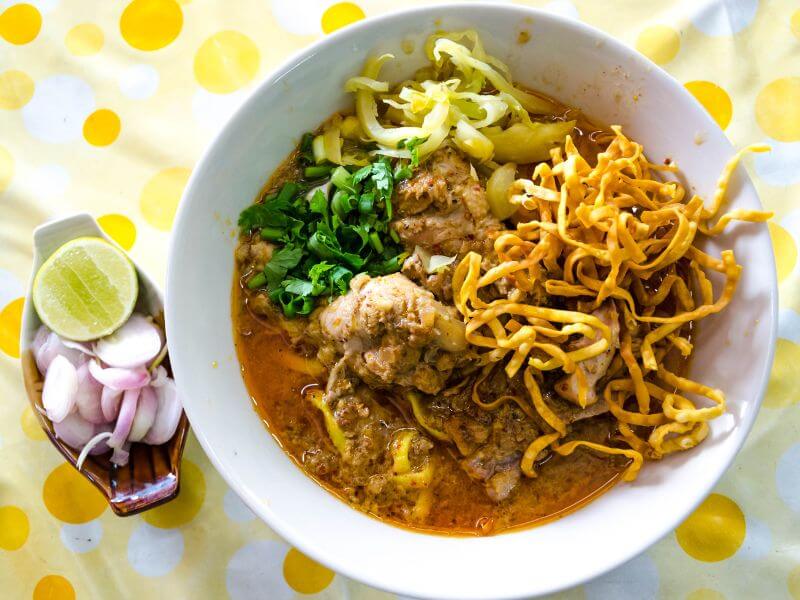 Khao Poon is a flavorful soup that does not pile up calories. For the health-conscious diner, choosing white meat over beef is a good decision. However, if you go for chicken, remember to discard the chicken skin before shredding the meat.

All the fresh herbs and condiments mean the soup is packed with essential vitamins and minerals that are sure to keep colds and other minor ailments at bay. The noodles, on the other hand, will provide energy.

Coconut milk contains fat and the creamier your soup is, the higher the calories it packs. So if you do not want to pile up the calories, you can consider using more water and less coconut milk in your Khao Poon.