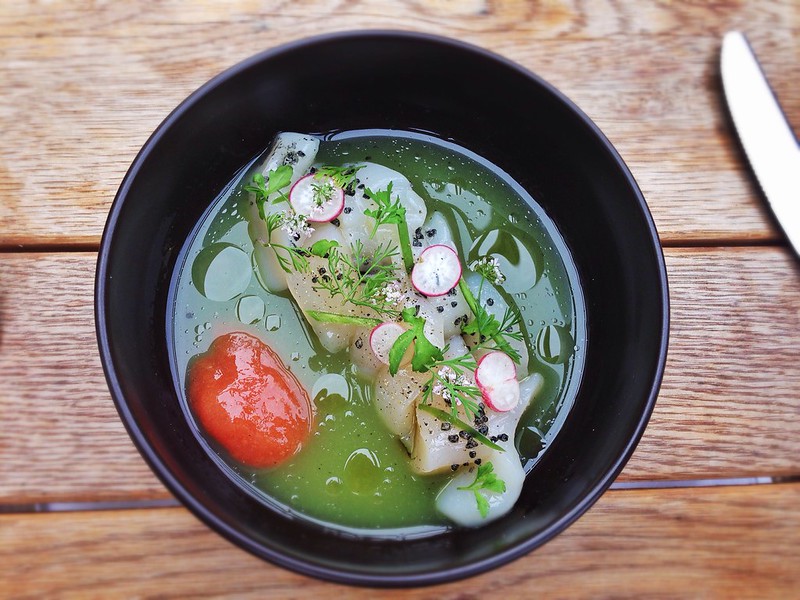 The very special Mexican seafood dish Aguachile, is a sauce seasoned with chili pepper, cilantro, salt, lime juice with slices of onions and cucumbers, served with different seafood doused in the sauce. These kinds of seafood can be white fish (cod, halibut, red snapper), shrimp, or tuna.

Known as the chile/pepper water, the dish is attributed to the Mexicans as the Ceviche style of dish prepared by the Peruvians. However, this sizzling Mexican appetizer is more than just seafood marinated in lime juice, hence it’s low carb and keto healthy diet.

Aguachile comes in variations, such as the Aguachile negro (black version) prepared with adobo sauce, chipotles, and soy sauce, and the Red Aguachile. However, we will be highlighting the Red Aguachile, the red form of the typical dish made from Worcestershire, clamato, and chile de Arbol.

I will be sharing more on the origin and history behind the Aguachile Verde dish (green form), its differences from the Peruvian dish, ceviche, and of course its unique recipe. 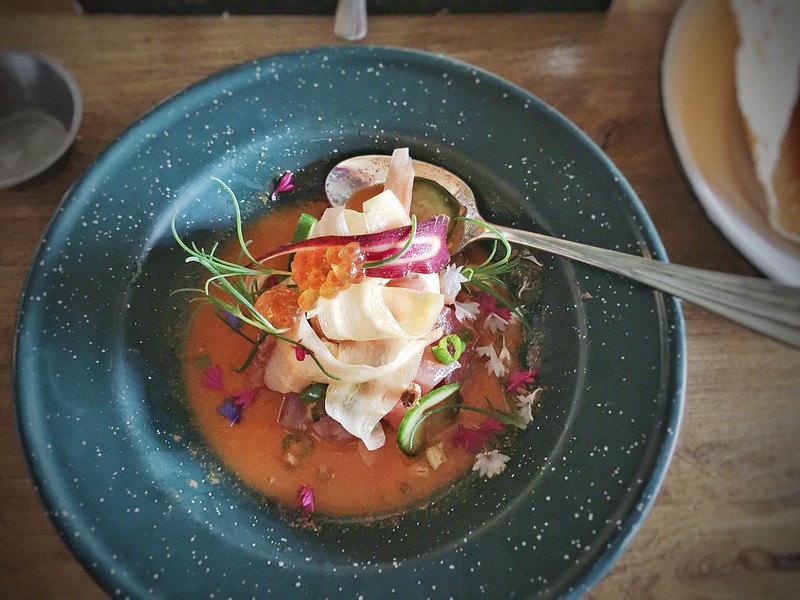 Interesting discoveries tie the origination of Aguachile to the coast of Sinaloa, one of the Mexican states, specifically the town of Mazatlan, a place is known for its fishing expertise.

Within the fishing town, the dish is referred to as Aguachile de Camaron, a seasoned dish with fresh veggies, cilantro, chili pepper, lime juice, salt, and some slices of onions. Although the typical version of the Aguachile is thought to be prepared with raw shrimp, red onion, lime juice, cucumber, and chilies (jalapenos or serranos). However, this isn’t the original native version the Sinaloa indigenes prepared at first.

Aguachile, by its meaning, had nothing to do with seafood, as our present generation has come to recognize it by. Centuries before the Spanish conquest (16th century), indigenes of Sinaloa were known to transport their meat from the mountaintops where they lived to the pacific coast where civilized traders were, to make a trade for some salt.

The salt was to preserve their sun-dried meat such as venison and wild boar. On their return, they would prepare a boiling bowl of water with chiltepin chili pepper (small round wild chili plucked from the forest around the mountain), and douse their jerky meat (dried salted meat) in the heating water.

This technique of dish preparation was what came to be known as Aguachile, chili water. Safe to say, the dish was named after its main ingredients (water and chili).

Over time the native dish of Sinaloa spread to the Northern region of the country. With its spread came to its reinvention, the recipe evolved into a tasty sauce used as a marinade for raw seafood, mainly fish and shrimp. Although the period of its evolution into a shrimp dish isn’t clear, senior citizens of the state point to its change back to the 1970s, when the fishing industry of Sinaloa grew rapidly.

It is believed that the Japanese migrants of the 20th century in Mexico, contributed to the adoption of seafood in the native food. However, other residents believe the seafood spin of the dish was a food eaten by Sinaloa fishermen who had left the urban region and valleys, hence its late discovery.

In the 21st century, about 20 years ago, Aguachile seems to be taking another recognition with a name, Camarones ahogados, meaning drowned shrimp.

Will Aguachile Verde ever go back to its original versions? That’s highly doubted. Mexico is presently the 17th-largest seafood exporter globally, with Sinaloa accounting for 37 percent of its shrimp in 2017. The adoption of shrimp and other kinds of seafood in Aguachile can be tied to Sinaloa’s major role as one of the major exporters of shrimp in the country.

The Aguachile marinade of nowadays, consists primarily of vegetables (chili pepper, red onions, and cucumber), salt and lime juice, with shrimp as the famous seafood. However other seafood options have included tuna, clams, snapper and even Octopus, yes Octopus! With octopus as the seafood of choice, it is boiled before marination, unlike other kinds of seafood.

The major ingredients of Aguachile (vegetables and seafood) have been subject to variations, hence the different versions of Aguachile (green, red, and black). For instance, common chili peppers used can include Habanero, Serrano, or even Jalapenos depending on the individual’s choice. Some fruit lovers go further to add watermelon, mango, while others add spirits (Mezcal or Tequila) into the marinade. 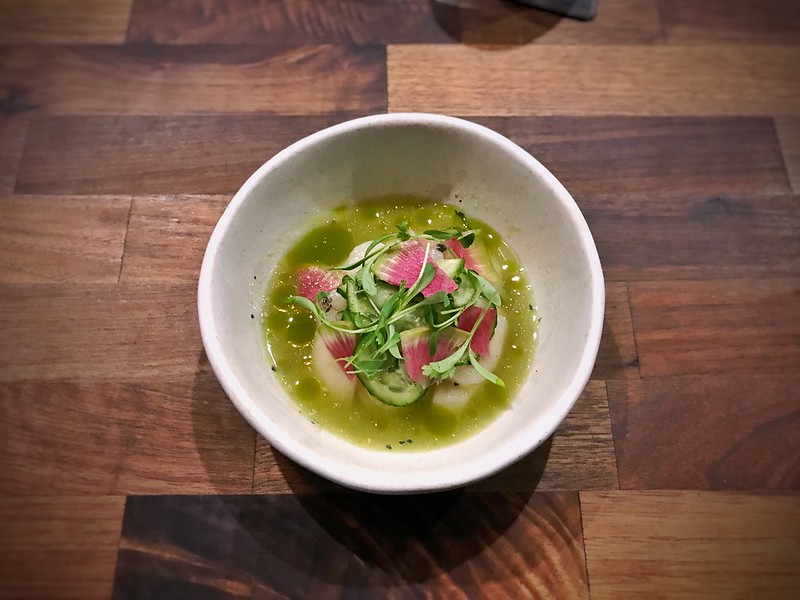 It is common to have the Mexican and Peruvian dishes used interchangeably. But there are considerably note-worthy differences between both dishes. Ceviche, also known as cebiche is a Peruvian dish (main course or appetizer) composed of fresh fish cured in citrus juice (can be lime or lemon) and seasoned with chili pepper, coriander, onions, salt, and aji.

We, however, recall how Aguachile is made, having derived its name from its main ingredients. It is important to note that although both dishes originate from South America, Ceviche is a peru-dominated dish, while Aguchile is accredited to the coastal northwest of Mexico cities found along the Pacific ocean (this refers to Sinaloa and Nayarit).

A difference, however, is in the initial preparation of both dishes. The Aguachile is first prepared by the heating of chiltepin/chili peppers in water, before the addition of its varieties of vegetables such as tomato, onions, lime juice, cilantro and more. So for Aguachile, it all begins with the chili and some water. While in Ceviche preparation, it begins with the seafood cooked in lime/lemon juice.

This differs when comparing Aguachile, where as soon as the seafood is tossed into the line, it is ready to be served. So it’s a longer marination period in ceviche preparation and a short one in Aguachile preparation.

The process of marination in the ceviche preparation process also raises concern, since no form of heating is involved. The “cooking” here is a denaturation process occurring between the citric acid in lime/lemon and the proteins of the seafood.

Hence, the caveat here is that only freshly served ceviche should be taken, since the “heating” method here doesn’t completely get rid of potential germs in the seafood. However, this is different for Aguachile, where the seafood is marinated in the heated/cooked sauce and served. 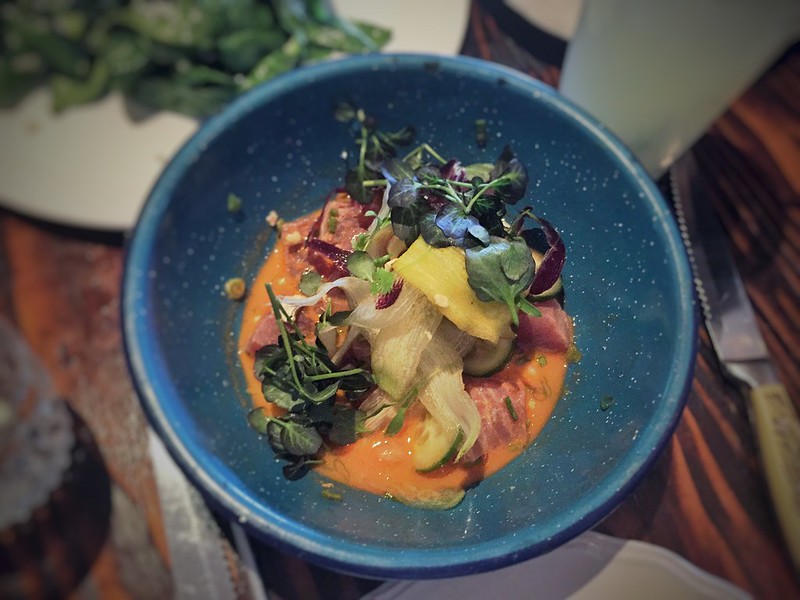 Red Aguachile or otherwise called “rojo” is a sauce typical to residents of the Nayar mountains. It is composed of red chili peppers, Habanero red sauce (Huichol salsa), and oftentimes some tomatoes. The Cora people (indigenes of the nayar mountains) are located in Nayarit state, a boundary from Sinaloa in the north and west of the pacific ocean.

Famous for its fishing and agricultural practice, their adoption of the Aguachile dish into their taste comes as no surprise, given their proximity to Sinaloa.

We are sharing a sizzling process for preparing Aguachile as an appetizer or a main course meal. Our preferred method of serving the tasty Mexican dish is the Shrimp served with cucumber, avocado, and tortilla chips.

A pinch of salt 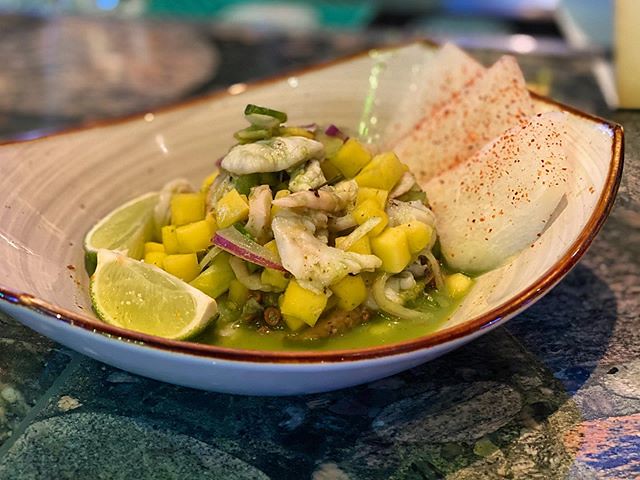 Feel free to try out processed frozen shrimps, if seafood cares for you or you just feel squeamish. Also, remember to allow the shrimps to thaw before you are ready to start cooking. You of course still get the flavor as you get ready to use the raw shrimp on your next try.