Mexico is a country rich in culture and history and the best part is that the natives of the country are never hesitant when it comes to sharing it with the world. They do this in many ways including through their food. Without a doubt, Mexican food is popular globally because not only is it available in a wide variety but it is also delicious. There are so many dishes you can choose from, with common ones including guacamole, tacos, chilaquiles, burritos and so much more, but have you heard of Jaiba?

If you haven’t, worry not because in this article you will find out more about what jaiba is, its origin, and curiosities, and we even share a recipe so that you can try it at home. 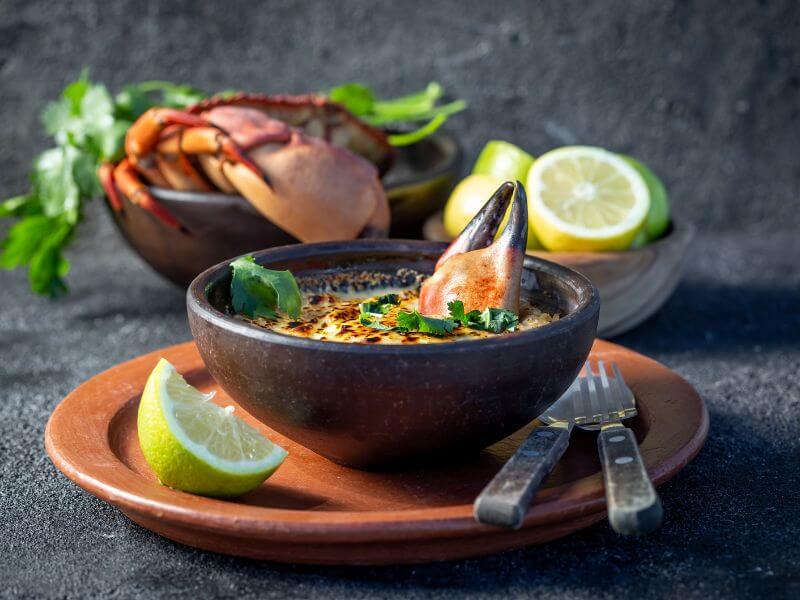 So one can say jaiba is a zesty, refreshing Mexican food that is very tasty. It is to a great extent enjoyed by people who love to eat seafood, especially in the Caribbean and other Latin American countries. Usually, jaiba ceviche is made from succulent crab meat, some fresh lemon, other different lime juices as well as some colorful tomatoes. You will really enjoy this dish in the summer as it makes for the perfect side dish. In making this, you have the option of using real crab meat or an imitation of the same.

The dish is believed to have first originated in Peru. The word jaiba in itself is the name of a crab type called Chesapeake blue crab that is mostly found in the Mexican Gulf and generally in the Atlantic Ocean. The method used in the preparation, that is macerating raw fish in citrus and other spices were brought to that part of the world from  Spain. It happens to be connected to the Muslim heritage that is to an extent present in Spanish cuisine. Thanks to how dominant Lima has been throughout the centuries, popular dishes from there were easily taken to other Spanish colonies in the same region. Within a very short time, these became part of the people’s local cuisine.

To date, there exist several variations of this dish depending on the country you end up in. Aside from Mexico, ceviche is very popular in Chile, Ecuador, of course, Peru where it is believed to have come from, Cuba, and Panama, among others.

Did you know that there are various categories of ceviche? Several in fact. Three include:

As the name suggests, this is the simplest ceviche form that only contains fresh fish that has been marinated in lime juice. It is usually mixed with some chili peppers, some chopped red onions, cilantro as well as some salt. It is the classic ceviche.

As you can imagine, this one is more elaborate compared to the simple one. It’s a more interesting version containing the ingredients in the first as well as more shrimp, octopus, squid, clams, and some scallops. It may also be prepared with mussels and small crabs.

This ceviche contains octopus. It is very common especially in Peru around the coastal areas. It’s great for people who are not fans of the classic ceviche feel/texture or its taste. It’s very delicious. 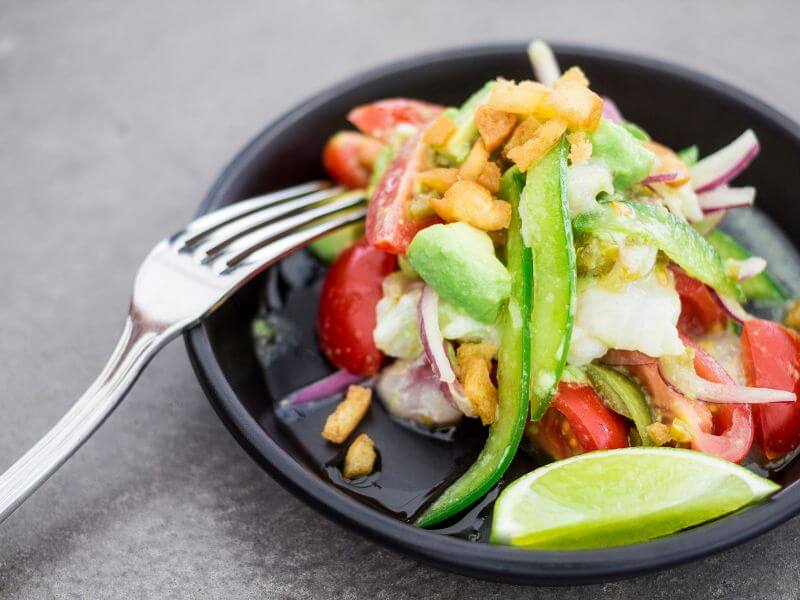 Ceviche de jaiba is very popular in Mexico and falls under some of the most popular foods on different menus in the country’s restaurants. It is especially common at the coast in resorts there. It is made with shrimp, tuna, crab, or any other fish type. It also includes citrus fruits such as lime incorporating lime juice, passion fruit, garlic, tabasco, some nopales, and chilies.

Some bell peppers are also included sometimes. With Mexican ceviche, you will have a very easy time preparing it since you will not have to cook. All you have to do is follow the recipe accordingly. There are different types of ceviche, especially in South America. In fact, it is one of the most loved dishes for brunch in the region which would explain the many existing variations.

You will notice that they have so much in common in terms of preparation, but at the end of the day, there are some few differences in very few ingredients with some variations having more while others requiring less. In other cases, the difference is only in how it is served.

First, the Chilean Ceviche is usually made with either halibut or Patagonian toothfish. To marinade, both lime and grape juices are used. In it, they also add minced chilies and garlic. Other ingredients that can be added to this dish include garlic and chilies. For Cuban ceviche, Mahi Mahi, green bell pepper, allspice, habanero pepper, onion, and lime juice are used.

When you go to Panama, you will notice that the ceviche is made from white sea bass. It is made in little pastry shells. In some parts of Panama, people make ceviche with shrimp, squid, or octopus. They include habanero, celery, onion, salt, lime juice, and pepper.

In Ecuador, people prefer to enjoy ceviche with some plantains that have been thinly sliced or some corn nuts. They also incorporate both shrimp and tomatoes in their dish. They use clams sometimes.

In Costa Rica, they prefer to spice their ceviche with some salt, pepper onions, minced peppers, cilantro, and also lime juice. This is served with lettuce as well as some soda crackers. In some cases, they serve it alongside ketchup and tabasco sauce. They also like to use tilapia, marlin, and shark. 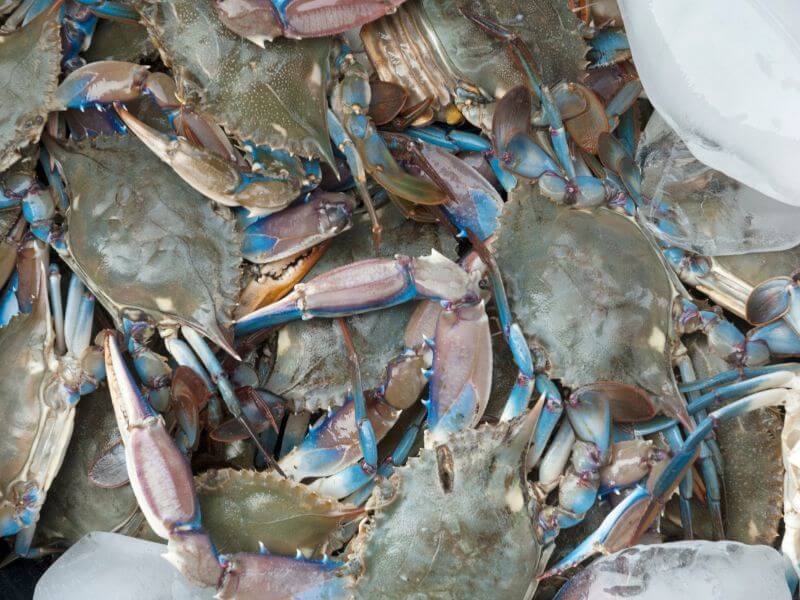 Both jaiba and cangrejo in Mexico are words that mean a crab. However, there is a difference. Jaiba is the specific name for a crab that’s found in freshwater, which is also called a blue crab. Cangrejo on the other hand refers to a crab that’s from salty water. Cangrejos come with smaller bodies but then have bigger hands. On the other hand, jaibas have a bigger body but smaller hands. 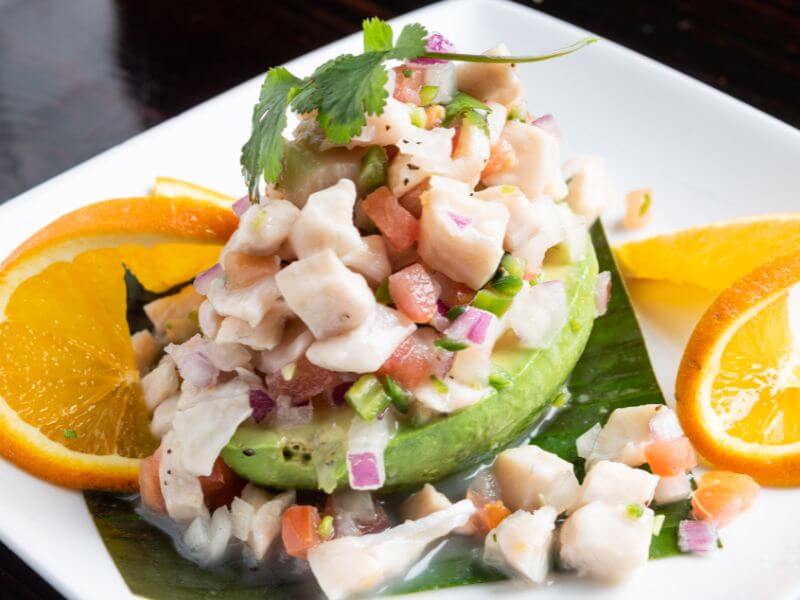 When it comes to making jaiba, the process is very simple. As long as you have the freshest ingredients, you will have your delicious jaibas in a short time. Fresh ingredients assure you of that great flavor.

You can always store your ceviche for some hours until you are ready to serve it. However, for the best taste, it is more advisable for you to serve it almost immediately since it tastes better when it’s still fresh.

A great tip when preparing this dish is that you should avoid using crab meat that’s been canned in those common little containers. While they are cheap, they will not guarantee you the amazing result that you desire. Another thing you might want to keep in mind is your vegetables and how you chop them. It’s best to ensure that you chop them in the same size.

This does not only make them more appealing to look at but it also makes it easier for you to use a tortilla chip to grab a bite. It is also important to note that you cannot possibly use metal or any kind of plastic bowl in the preparation process of this dish or any other kind of ceviche. This is because they might end up reacting with these materials considering how acidic they are. It is best to use glass bowls instead.

So, every single serving of jaiba contains about 345 calories in total. It will include 16g in total when it comes to fat. The amount of cholesterol is just about 12g, 12g of protein and just 642mg of carbohydrates.

Try out jaiba sometime if you are a food lover. As you can see, it’s easy to prepare, just visit your nearest grocery store, get the necessary ingredients and then get right to it. Enjoy with your friends and family, this delectable Mexican dish.