Mortadella – What it is, History and How this Italian Delicacy is Made. 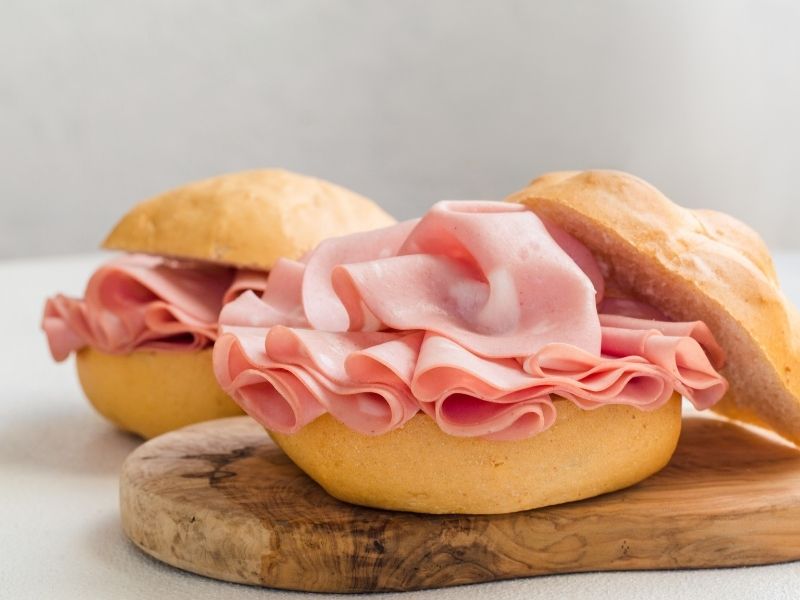 Italian cured meats are one of my absolute favourite, there is so many varities in every Italian region to choose from. From prosciutto cotto, prosciutto crudo, salami, coppa to name one of the most expensive and well known worldwide, but no many people knows about Mortadella (which is a very tasty treat for appetizers and sandwich). Here is my take about Mortadella and everything you should really know about it, with a very good selection of my own recipes for pasta and tasty sandwiches or “panini”! 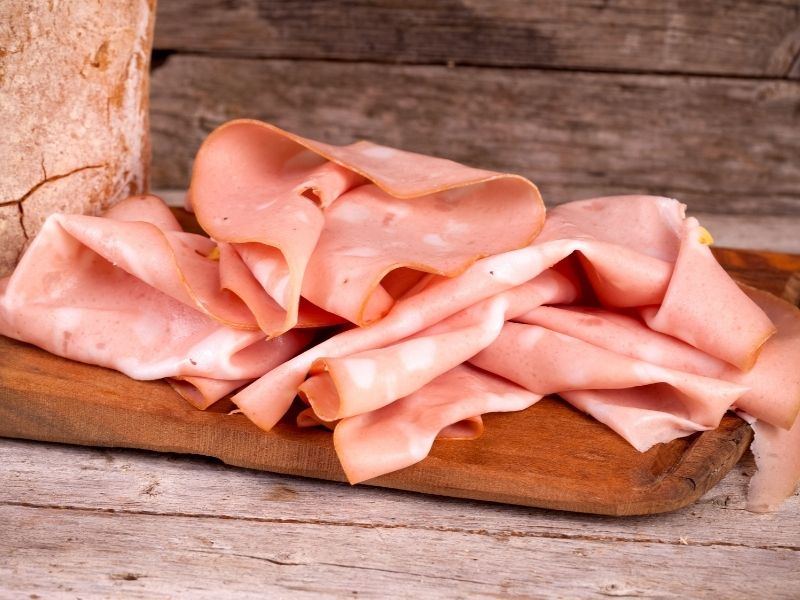 Mortadella is a cooked pork sausage product with a round shape, made from a mixture of pork meat which a good part is the shoulder. All the pork cuts are finely grounded and pressed together, and also a percentage of around 15% of pork fat cut in a square size is in the mixture. It is then cooked fully (not a raw cured meat as some believes), the final result is a very aromatic and little spicy note flavour. Taste is quite delicate, doesn’t have any smoking note or other flavors that usually are on Italian majority of cured meats. 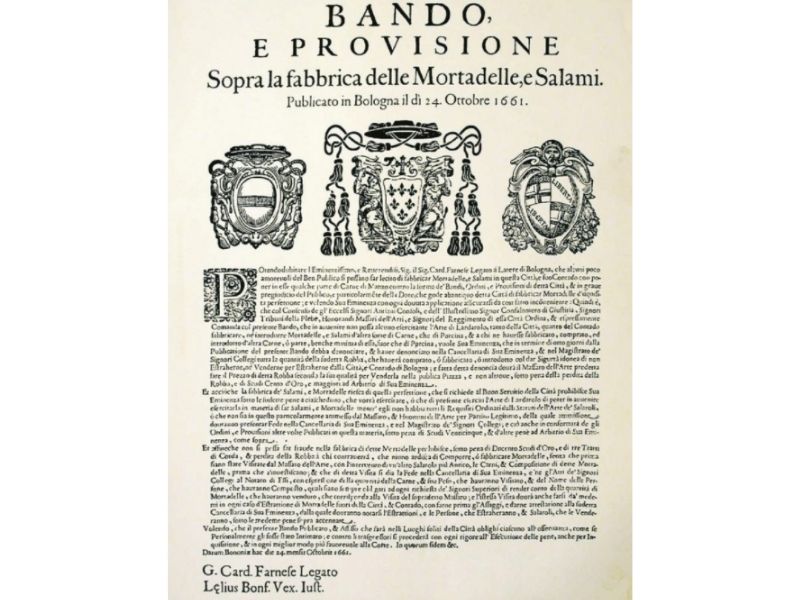 Mortadella region of provenience is Emilia Romagna, considering few historic sources and books is probably coming from the Reggio Emilia province and Bologna. Still, many experts are sure that this delicacy was sold for rich and noble people in Bologna since around year 1500.

Salvaterra (Reggio Emilia Province), is were most likely the first cook was coming from, there is also evidence on similar cuts of delicacies created during Imperial Roman Age.In fact drawings were discovered representing pigs taken to pasture and also the use of mortar with pestle (something that is known for sure was used by Romans to prepare meat).

Evidences are also found that shows some cooks created different versions made with pork, veal and donkey mixed all together. In 1644 Vincenzo Tanara from Bologna, wrote a book where is shown the first Mortadella recipe very similar to what we know it today.

He indicates also the ingredients and spices that have been used at that time: nutmeg, cloves, peppercorns, cinnamon, white wine, sugar, salt. That historic recipe also includes quantites of meats cuts: 30 percent pork fat and cheek (diced in large cubes), 70 percent shoulder and thigh worked and pounded until it is very soft, then stuffing and cooking. In this period is also found the first evidence of ban declared from local councils, to protect the genuine production of this delicacy.

The name Mortadella is probably coming from a fusion of latin terms such as “mortarium” and “mortatum”, which means “mortar finely minced meat”. The first seal created for the ban was indeed a draw of a mortar.

This ban was updated in 1720, and a Church Cardinal this time introduced even more restrictions on production practices.

Today, the genuinity of mortadella is established by the “Consorzio della Mortadella Bologna” and approved by the European Union.

While in the past Mortadella was a delicacy accessible only for the rich, today is one of the cheapest cold meats cut and highly popular amongst middle class families. It is often consumed from traders workers for a quick and cheap lunch break. 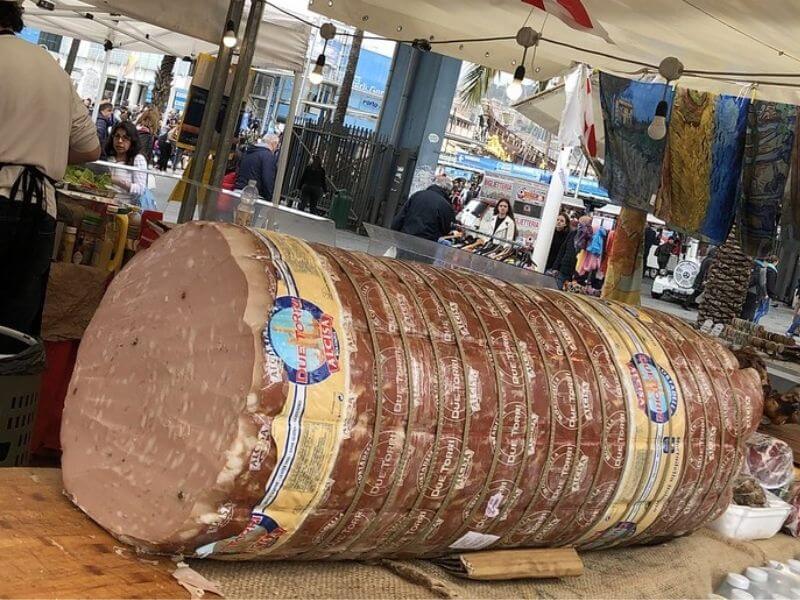 Mortadella Vs Bologna, it is the same thing?

The two names means the same thing, it is just labeled differently is some parts of Italy.

If there is to be found any difference, one there is, and it is the composition of the meat.

In fact in some part of Italy Mortadella is produced without strictly following the seal guaranteed recipe, labeled “Mortadella Di Bologna IGP”.

In order to follow the IGP genuine version, producers can only use pork meat without any addition of other proteins. Also, the amount of square fat cannot be less than 15%. It can be rounded or oval and can have only natural or synthetic film to be stuffed in.

There is around thirty manufacturers that can produce the “IGP” genuine version (located not only in Emilia Romagna region).

The consortium is in Milan and guarantees the production checking all along the three important steps: control, guarantee, quality.

Many highly qualified operators works at the consortium, with serious and precise practices left from past generations.

These previous generations have passed all the knowledge and passion for this very popular meat delicacy, and it is mandatory the strictly practices following. 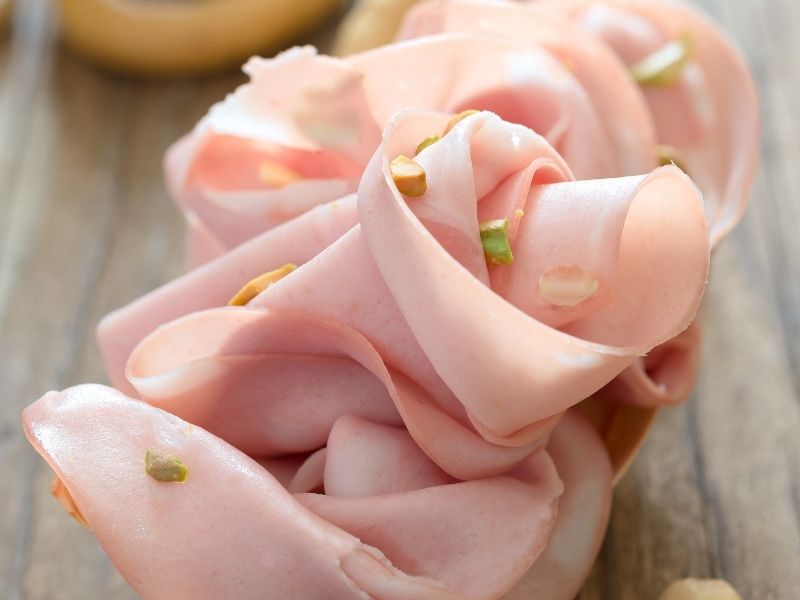 Mortadella Pistachio, better with or without?

Even in Italy, lots of people argue if the original version is with or without pistachio nuts.

In fact the original IGP version is without nuts, and it is consumed aswell with pistachio in Emilia Romagna region, perhaps not very often.

In central regions, southern region is eaten more often with pistachio and in Rome area it is almost always preferred this version over the “genuine” one.

I appreciate the version with Pistachio, as for me it seems that it balance the different flavours together. 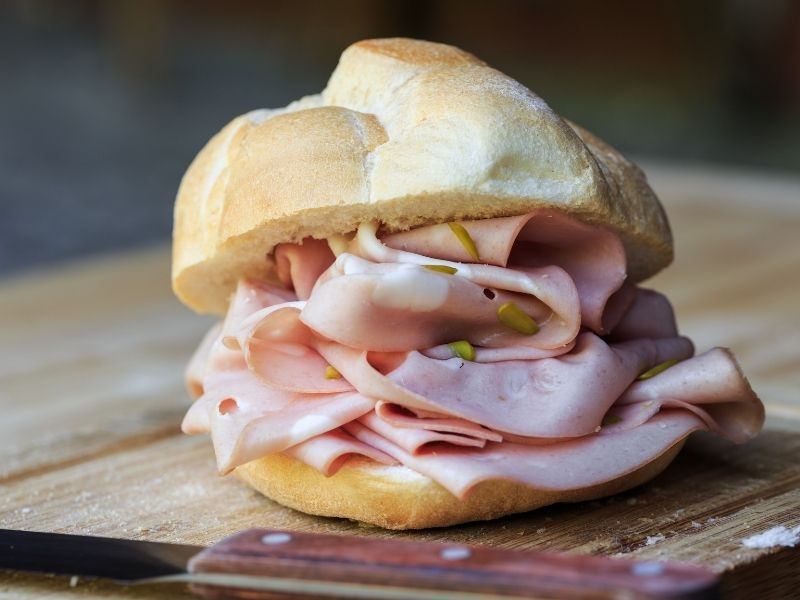 Contrary to what many people believes, Mortadella is as light and dietetic like white meat.

If you always been convinced that this is a food that must be deleted from your diet, then you have to seriously reconsider it.

The whole preparation and cooking system in fact guarantees that proteins and fats at health levels are maintained, and cholesterol level is the same as a portion of white fish, this is aswell one of the lowest salted cold meats cuts.

Note that Genuine Mortadella is without polyphosphates

The main characteristic that distinguishes mortadella from all other cold cuts is the cooking, it can be consumed during pregnancy without the danger of contracting toxoplasmosis. 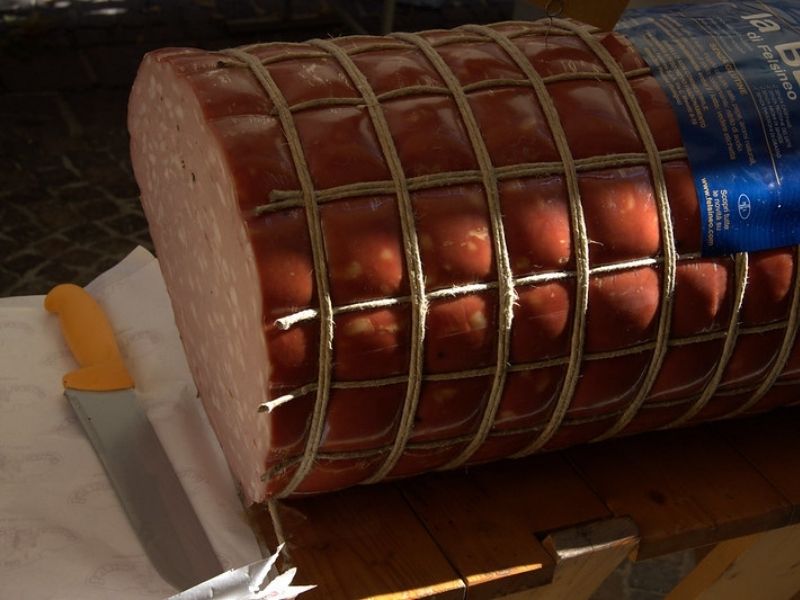 How is Mortadella Made?

All the parts coming from striated muscles, mainly from the shoulder, while for the fatty part high quality throat fat is used.

Let’s see in which steps the production method consists of

The meat is minced and reduced into a homogeneous mass through three different steps in special mincing machines, in slang called “extermination”. This name says it all about their ability to transform the meat into a very fine mixture.

At this point, it is time to add the cubes of fat that are, first of all, removed from the rind and washed with hot water.

Once ready, with the addition of salt, peppercorns and flavourings, the lard is evenly distributed throughout the sausage and in the preferred proportion (minimum 15%, according to the production specification) to give a particular sweetness to the mortadella.

Now it is necessary to proceed with the bagging and the actual creation of the shape, then everything is pressed together: the pieces normally on sale are around 12 kg total.

Now begins the most delicate phase of the whole process, the one that gives the mortadella its characteristic aroma and softness.

The dough enters special cells where the stewing begins, a delicate cooking in dry air boilers.

It must reach a core temperature of 70°C, with cooking times that on average vary between 12 and 26 hours.

This step, despite the constant automated controls and technological sensors, still requires human supervision by a master steamer.

In essence, many experts in this ancient art came from Verica, a small town on the hills of the Modena Apennines, which boasts a long tradition of artisan sausage makers.

The reason for these controls?

An inexperienced cooking can result in an irregularly shaped mortadella, leading to partial melting of the lard, and alteration of the pink color (due to excess heat).

Finally, after cooking, the mortadella is quickly cooled under a shower of water (this step is called “cold showering”) and placed in the cooling cell.

Here remains a couple of days or a little more, depending on the size.

After the final cooling phase, the mortadella is finally ready to be served and enjoyed!

Do you want to make it on your own? It is a bit time consuming but if you are curious and passionate about it.. you can!

Try to follow the same method, use a normal meat thermometer and, of course, you will need a sausage maker.

Some very good Sandwiches can be made with this tasty delicacy!

I also never toast on Flat Press anything that goes with Mortadella, as it really changes the flavor, but instead i prepare it and warm it up in the oven for 5 minutes at 180c. degrees.

Let’s see some of these:

A Very Good Recipe to use for Pasta

Salt: a kitchen spoon for the cooking water plus a pinch for the sauce

Start by taking the yellow peppers and, after washing them thoroughly, put them in a baking tray and place them on baking paper.

Bake the peppers in a static oven at 250c degrees for 40 minutes (in a ventilated oven at 230 degrees for about 35 minutes.

As soon as they are cooked, put the peppers in a bag and let them cool for about ten minutes, this procedure will make it easier to peel them

While the peppers cool down, take the mortadella and cut it into cubes

Once this is done, brown the cubes of mortadella in a large non-stick pan, without adding oil, until golden.

Take the peppers and clean them: remove the skin and seeds with the help of a knife

Once they are clean, put the peppers in a food mixer and blend them until you get a smooth cream (If you don’t have a mixer just cut me in thin slices with a sharp knife)

Add salt and pepper to taste

In the meantime, cook the spaghetti in plenty of boiling salted water.

When the spaghetti are al dente, drain them taking care to leave 1-2 ladles of cooking water aside

Sautee the spaghetti together with the pepper and mortadella sauce directly in the pan, extending with 1-2 ladles of cooking water and cooking over low heat for a couple of minutes so as to mix everything

Add a drizzle of extra virgin olive oil and your delicious Pasta is ready!

Mortadella is a great Italian delicacy and a very versatile ingredient in the kitchen, if you haven’t tried yet you definitely should!

Also is a cheap cold meat cut and can be used for cooking in other dishes.

1 thought on “Mortadella – What it is, History and How this Italian Delicacy is Made.”