The Chinese Rice Cake, or the Nian Gao, has always been a familiar and welcome sight during Chinese New Year. Chinese families inevitably end up buying or making Chinese Rice Cakes for their New Year’s celebrations, to serve as good fortune for the year ahead.

Nian gao is meant to represent advancement, progress and growth, which explains its popularity during Chinese New Year. Friends and families also often give Nian gao as a gift to each other when visiting during holidays. There’s no doubt that one can resist the delicious chewiness of a Chinese Rice Cake.

This article will be telling you more about what an Asian Chinese Rice Cake is, including its origins, how it’s different from other rice cakes, and a recipe that’s easy to follow for those who would like to make their own Nian gao at home. 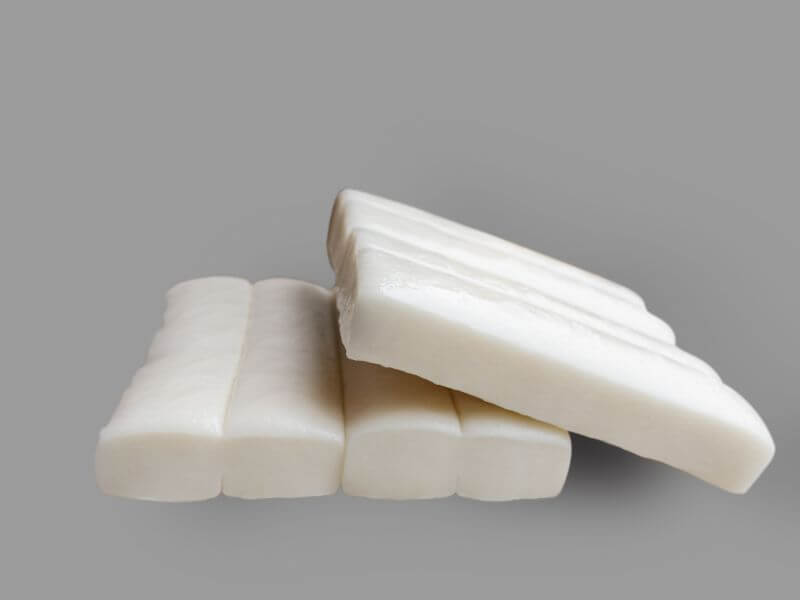 What is Chinese Rice Cake

Nian gao, or a Chinese Rice Cake, can look slightly different. It only depends on which region of the country you’re in. But, generally, a nian gao is a steamed brown sugar rice cake. There are regions of China where they’re nian gao is created as a white and unsweetened rice cake that is then sliced and stir-fried.

You can think of Chinese Rice Cakes as a type of thick, oval-shaped pasta. They’re made from pounded rice and possess a chewy and sticky texture. It may have different varieties across China, but they all share the same glutinous rice ingredient. 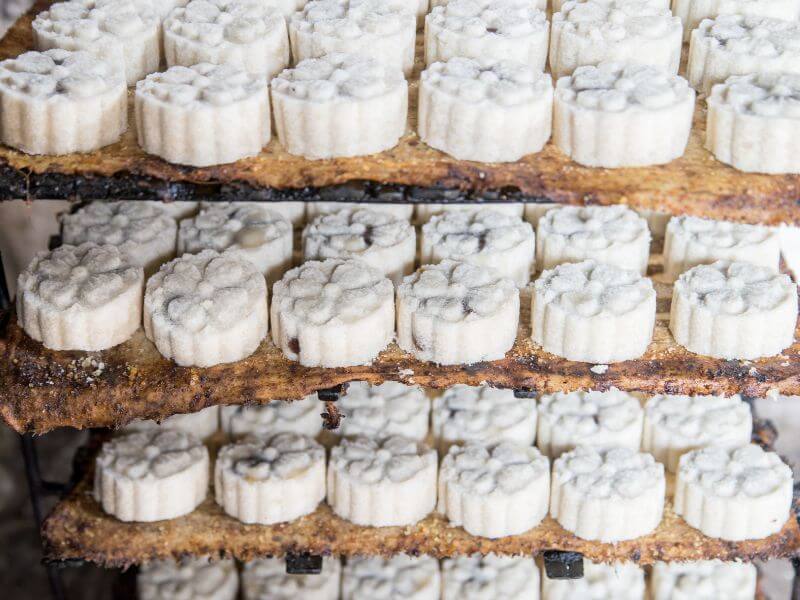 There are a couple of legends that have been told across generations, revolving around the origins of the Chinese Rice Cake.

According to this legend, the nian gao was created as an offering for the Kitchen God, who people believe resides in every house. Every year, the Kitchen God returns to the Jade Emperor to make his ‘yearly report’ on the citizens of China.

Because of their fear of their household being badmouthed by the Kitchen God, the people started offering him the nian gao sticky rice cakes. This was done in an attempt to stick his mouth shut and prevent him from reporting anything bad to the Jade Emperor.

This is also why people today prepare nian gao as offerings before the Chinese New Year celebration.

This legend dates back to around 2,500 years ago. It was said that the death of the general and politician of the Wu Kingdom, Wu Zixu, during the Spring and Autumn Period, sparked the attack on the capital of Wu led by the Goujian, the king of Yue.

Several Wu army and citizens ended up trapped in the city with no food, resulting in the loss of many lives. During this time, a citizen remembered Wu Zixu telling them that if the country was ever in trouble with the people desperately needing food, they were to go to the city wall and dig three feet to get food.

The soldiers followed what was instructed and discovered that the bricks were made of glutinous rice flour. According to the legend, these were the original nian gao that ended up saving dozens of people from starvation.

Since then, people would make nian gao every year to commemorate Wu Zixu. It eventually became known as the Chinese New Year cake. 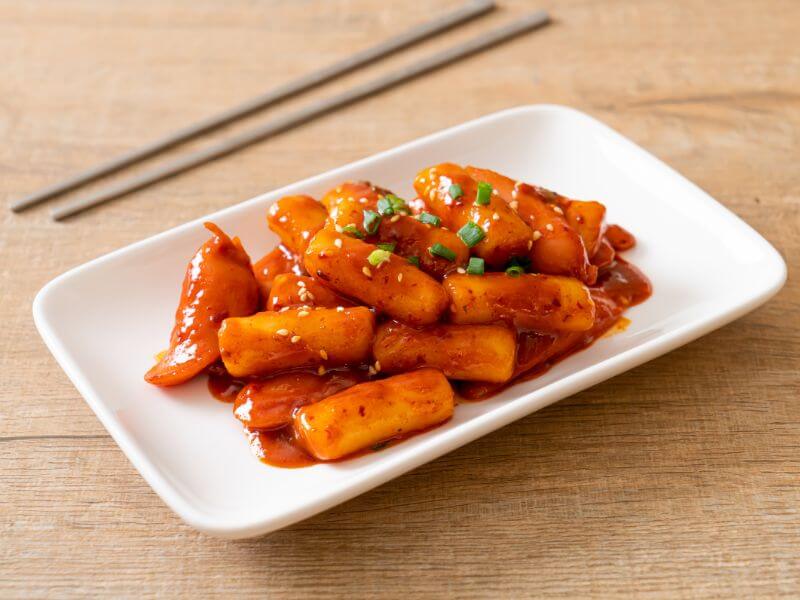 Rice cakes have always been a versatile dish. With its rice flour being the main ingredient, it can be compressed or combined with any other ingredient allowing it to exist in different shapes and become prevalent in Asian cuisines.

They’re similar to pasta in that they would have almost no flavor on their own, but when prepared with sauces and other ingredients they still retain the chewy texture and are able to absorb any flavor that’s used to complement it.

One particular rice cake dish that people might confuse with the Chinese Rice Cake is the Tteokbokki, or the Korean Rice Cake. One significant difference they have is that while the nian gao is sliced and flat, tteokbokki is made of small-sized and cylindrically shaped garaetteok. Korean Rice Cakes are also chewier than a nian gao.

The tteokbokki is also served with fewer garnish and side ingredients in order to draw attention to the dish’s chewy texture instead. Tteobeokki is boiled and then coated in various ingredients such as gochujang (chilli paste), gochugaru (red pepper flakes), sugar, sesame seeds, and soy sauce.

Another difference between the two rice cake dishes is that, while nian gao is made of glutinous rice flour, tteokbokki is only made of regular white rice. 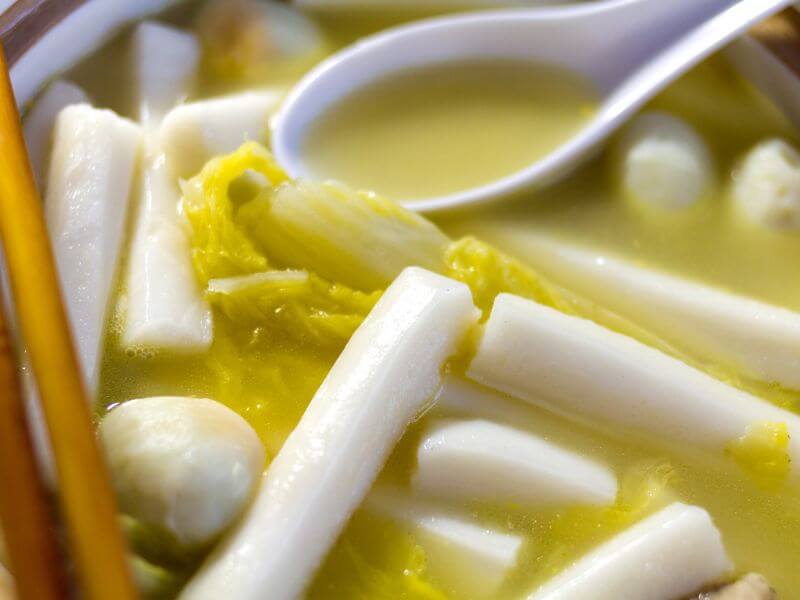 Chinese Rice Cake Soup is a traditional comfort dish in several regions in China. If you’re in the mood for something with a little less oil, then this is a great alternative to the traditional Chinese Rice cake.

You can find all sorts of rice cakes in soups in China, which isn’t a surprise considering Chinese rice cakes have existed for over two thousand years. Some people add all kinds of ingredients to their Chinese rice cake soup such as tomatoes, pork ribs, eggs, or vinegar while others would choose to add something else.

Only a few ingredients are required to make the Chinese rice cake soup. Together with your Chinese Rice Cakes, pork and a type of leafy vegetable are also the other main ingredients needed for this dish. 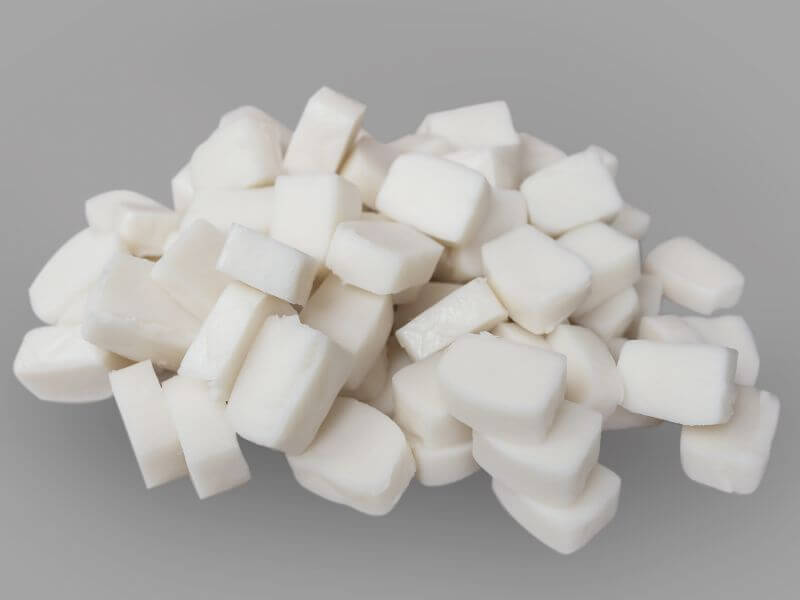 Chinese rice cake is fairly easy to make. You can cook it with either a steamer, slow cooker, or an instant pot pressure cooker. Here’s a quick and easy recipe to follow so you can make your very own nian gao from the comfort of your own home.

Make sure not to oversteam your Chinese Rice Cake. This could result in it being too dry and tougher to chew. You can check if your rice cake is done by poking it with a chopstick or a toothpick. If the stick comes out clean, then your nian gao is fully cooked.

There are couple of ways you can choose to serve nian gao. You can either slice it and eat it at room temperature, or you can choose to slice it and then fry it in a pan until it softens, and blisters start to form on its surface. If you want that extra crispiness to its crust, you can coat it with a layer of beaten egg before frying it.

Fun fact: the ‘nian’ in nian gao means ‘year’ while the word ‘Gao (糕)’ means ‘cake,’ but is also pronounced similarly to the word ‘Gao (高)’ which means ‘tall.’ When translated literally, nian gao then means ‘a taller or higher year,’ a message of prosperity. This is why so many people prefer to serve nian gao during the Lunar New Year.

It’s no secret that making Chinese rice cakes has become a family affair during Chinese New Year. Not only does it make for a hearty snack, but it also carries significant symbolism. Gifting your loved ones with this Chinese rice cake is a great way to express your wish for their prosperity and good luck.