Dolmades are sometimes referred to as “dolma.” It is a dish that many are fond of and has generally received a lot of ownership claims by a number of countries. This is perhaps owing to the fact that dolmades have been in existence for years.

It is a dish steeped in tradition that has quite the modern presentation and comes in a number of variations, but what exactly are dolmades? We discuss that below alongside the origin of this famous dish, a recipe, how to eat it and the nutritional value of this delicacy.

Dolmades refer to a family of vegetable dishes stuffed with a delicious rice mix that is molded into small rolls and boiled until tender. Cabbage and grape leaves are the vegetables often used in the preparation of dolmades, while onions, pepper, tomato, zucchini and eggplant are preferred for the stuffing. It is worth noting that while cabbage leaves are used sometimes, this is rare as many prefer grape leaves.

The stuffing may sometimes include meat, either beef, pork or both of them. The meat dolmades are usually served warm with garlic sauce or egg-lemon sauce and make for a delicious and healthy main course. The vegetarian dolmades are generally preferred cold or at room temperature with some creamy yogurt and a squeeze of lemon juice.

The vegetarian option anyway looks like to be the most appreciated and popular around the world. 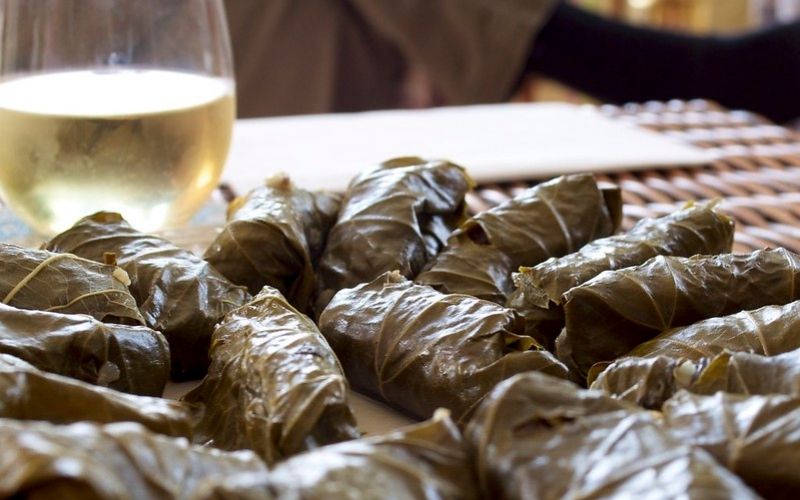 Where did dolmades originate from? Is it Turkey or Greece?

These are two very common questions people ask when it comes to this particular delicacy.

Dolmades are very popular in the whole middle east region, where is consumed and appreciated often from many countries within the region.

Both the Turkish and Greek people believe that they invented this dish although history has a different narrative. According to history,  in Iran, dolmades have existed since the 17th century, with a lot of other varieties being recorded from the same country in the 19th century, which in addition to vegetables, also included sautéed mint, ground meat, rice and also saffron.

That said, rolls made using grape leaves that contain stuffing with different ingredients are very common in Turkic, Balkan and Middle Eastern cuisines. Dolmades are a symbol of friendliness and are part of Meze.

Meze refers to traditional meals made of a number of small plates that are famous in Greece, North Africa, Balkans and the Middle East. During the Meze, dishes are shared as a symbol of sympathy and most of all generosity.

Dolmades are popular in a number of other countries such as India, Iran and Armenia, in addition to Iraq, Turkey and Greece. In fact, in Iraq it is considered the national dish and is consumed by all the ethnic groups present in the country, while in Azerbaijan the practice of making dolmades made it to the UNESCO list of Intangible Cultural Heritage.

Depending on whichever of these countries you find yourself in, these rolls will have a different name and a different set of ingredients for the stuffing. In Iran for example, the name is Dolma Barg, among the Sephardic Jews the name used is Yaprakes Finos while in Armenia, the grape leaves stuffed with rice, parsley, tomatoes and cinnamon are referred to as Yalachi Sarma.

The Greek Dolmades are perhaps the most famous of all with their classic stuffing being vegan although they still offer an exquisite variety depending on what part of Greece you find yourself in.

In Iraq dolmades were very common and were often served by Muslim families during the Ramadan period as part of their Iftar meal and are also part of meals still served during celebrations such as Eid-al-Fitr.

The people like to enhance the flavor by adding some tomatoes, onions and cumin. The Assyrians there, however, choose to prepare meatless ones for the Lent period.

The Iraqi Jewish people were known for a unique variation that had both sweet and sour flavours. Among the Sephardic Jews, dolmades also existed in interesting and unique variations that did not exist in the other countries.

The Jews in Eastern Europe prepared dolmades using cabbage rolls and kosher meat. This variation was preferred in countries like Russia, Ukraine and Poland. Since meat was a bit on the costly side, they sometimes mixed the meat with rice. 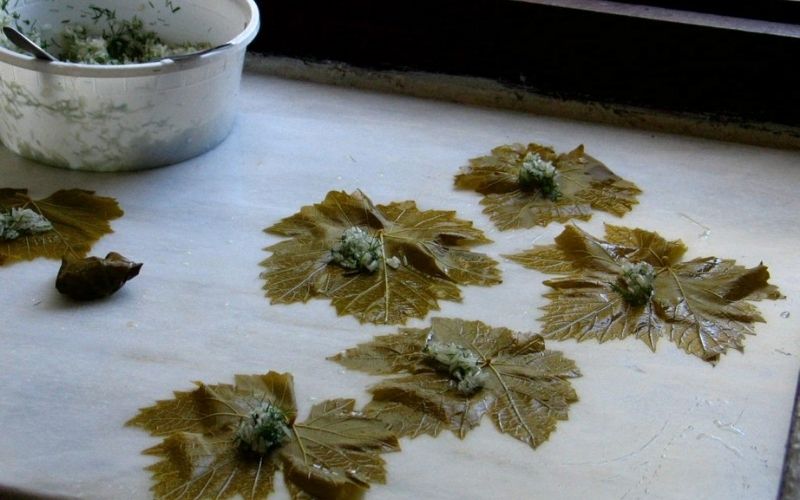 Preparing dolmades is not difficult. Once you have gathered all the ingredients you can have them ready through a few simple steps. Below is a recipe for the vegetarian type of dolmades to start you off. 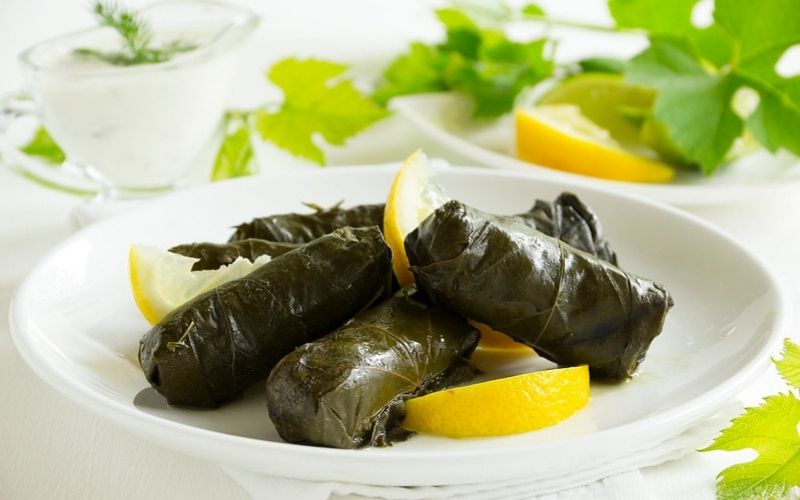 Trim the stalks from the vine leaves then for about five minutes, cook them in boiling water. Drain then water and rinse them then pat dry.

Heat the olive oil in a frying pan. Use medium heat while you do so.

Gently cook the onions until soft and golden.

Add the rice and cook for about two minutes before adding the pine nuts, parsley, currants, mint, salt and some pepper to taste.

Add your water, and then cover the ingredients mixed using a lid. Gently cook them until the water is all absorbed and the rice is almost fully tender.

Place the vine leaves on a clean chopping board or paper towel. Ensure the smooth side is facing down, doing a few at a time.

Place a teaspoon of filling on each leaf ensuring the filling is right at the middle. Fold the stem up first then follow by folding the sides of the leaf towards the centre. Roll it up tightly into a log shape.

Line your pan with some of your torn leaves to prevent the dolmades from burning then put the dolmades in the pan, packing them as close as possible to each other. Make sure the seam side is facing down.

Mix a cup of water with some lemon juice and some of your remaining olive oil. Pour this mixture over your dolmades. Cover the top using the rest of the leaves and allow boiling. You can weigh the dolmades down using a plate to prevent them from moving around then cover the top of the pan with a lid.

After they have boiled, reduce the heat to allow for simmering then cook for about an hour.

Remove from heat and allow it to sit and cool, then chill in your refrigerator for about two hours before serving.

Serve alongside some lemon to squeeze over. 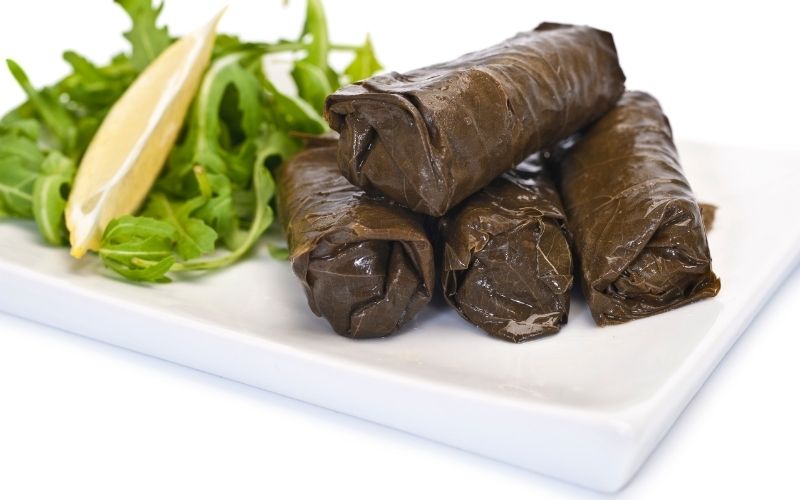 How To Eat Dolmades And Calories

Dolmades can make for both an appetizer and the main dish. You can always cook a lot of dolmades and store in airtight containers for about three day in your refrigerator. That way you get to enjoy more of them without repeating the preparation process.

The grape leaves used in the preparation of dolmades are rich in fiber, vitamin A and vitamin K, and low in calories. A piece of dolmades serving only contains 35 calories with just 1 gram fat content. They are great for a reduced calorie diet. It is however worth noting that the amount of fat in it might increase should you choose to marinate the dolmades in some olive oil.

The amount of calories can also increase depending on the other ingredients you choose to include in the preparation or serving. The ratio of rice to the rest of ingredients could also bring about a difference in the calorie and fat content.

The vitamin K helps in blood clotting and supports both heart and bone health. The vitamin A strengthens your eyesight, teeth and your skin. While eating one might not provide you with a lot of protein, it does give you 6 grams out of the recommended 130 grams of carbohydrates you need to eat in a day.

The leaves are also rich in antioxidants, compared to the juice or pulp of grapes. Eating them improves your blood circulation. They also reduce your chances of developing complications such as cancer and neurological problems.

This is an extraordinary delicacy very light and tasty, you can find them at your local grocery store or Mediterranean stores.

Once you get the hang of making dolmades, the process becomes easier and easier. So how about you start with the recipe above. After trying that, you have the freedom to choose between the many variations of this delicacy that exist.

Dolmades, aside from being delicious, are also very healthy. They add a nice international flair to your diet or meals. It’s also great that they give you versatility as they can be eaten cold or warm depending on which ones you choose.