Mexican cuisine is one of the most savored cuisines across the world. Its ingredients and dishes make it stand out. The cuisine has a variety of spices, offering multiple flavors. However, amid the adaptations of Tacos and Quesadillas, the other masterpieces have taken the back seat. This does not mean that they are any less good than the famous adapted dishes. One of the first dishes that comes to our mind is the Mexican Birria Consome.

The Mexican Birria Consome is the dish apt for sour and spicy food lovers. Rich in chilies, tomatoes, and meat, it is as authentic as Mexican food can get!

So, if you are curious and want to explore more options in the domain of Mexican cuisine, read on. 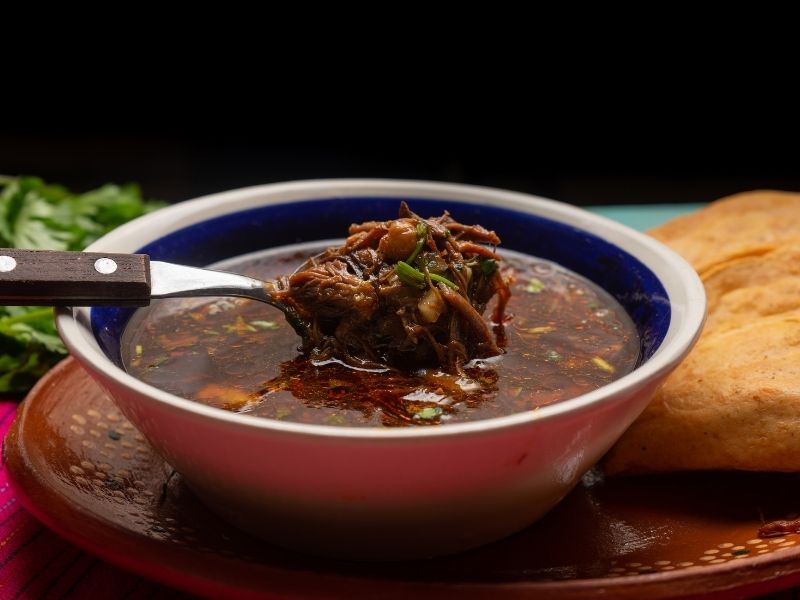 The Mexican Birria is an extremely authentic dish from Jalisco (Cocula), and best describes regional street food. It is essentially a sour and spicy stew. However, you can thicken to form a sauce and add to other dishes!

This is probably the first dish to come to my mind when I think of food born out of necessity – hunger.

You can date back the origins of Birria Consome to the 16th century during the Conquista era when there was a cultural exchange between the Mexicans and the Spaniards.

This era led to the introduction of exotic flora and fauna species in the Mexican region, like pigs, goats, and chilies.

During this time, goats began to overgraze, and thus, their population increased, which led to a famine. To tackle this situation, people began killing goats and consuming their meat.

However, goat meat being new to them, the Mexicans were not too fond of the strong taste and smell. So, the addition of different herbs and spices as well as cooking in kilns and the earth helped with the palatability.

With time, Birria has evolved and is now also made with other kinds of meat – pork, veal, beef, or lamb.

Additionally, different vegetables like lime, cilantro, onions, and cabbages apart from salsa are added. It is also coupled with different drinks, like agua fresca, mezcal, beer, or tequila.

You can use it for any occasion – baptisms, quinces, weddings, etc and eaten at any part of the day. It also serves as a great hangover cure, owing to its strong flavor and spices.

So, as mentioned above, Birria Consome is a unique stew with chilies, meat, and light vegetables. You can also thicken it and use it as a sauce in tacos and other dishes.

Moreover, it also has a subtle Spanish touch since it was born during the Conquista era, out of the cultural exchange.

Birria Consome and Birria Tacos are different dishes made with the basic Mexican Birria. Though the elemental ingredients and recipes are similar, there are quite a few differences.

Let us look at each of them in detail:

There are common ingredients found in both Birria Consome and Birria Tacos. These include chilies, vinegar, spices, meat, cilantro, onions, cabbage, etc.

Birria Tacos, additionally, have ingredients that a usual Taco has. This makes it a more wholesome dish than just the Consome, which is a stew.

On the other hand, a lot of people like to first test the waters with the Birria Consome, since Birria Tacos are usually wholly Mexican, unlike its adaptations.

You may find some subtle differences in the flavor of both dishes.

For instance, as the Biarra Tacos have tacos apart from the Birria, it could be more of a snack than a stew.

Birria Consome, on the other hand, is more of a stew/soup and is richer in flavor.

Birria Consomes have a deep red to brown tinge to them, due to the chilies, meat, and spices present.

However, Birria Tacos has a burnt tinge on the outside, since the tacos are cooked in the Birria sauce. On the inside, they are the color of a usual taco, since the filling is the same.

Though both the dishes are quite the same, their origins are slightly different. The authentic Birria Consome originated in the Guadalajara region during a cultural exchange.

The Birria Tacos, however, are more Mexican because they have Tacos and the Birria sauce, and the tacos are originally Mexican.

With the following steps, Birria Consome would be very easy to be cooked and prepared. There are multiple methods to make this Mexican dish, but the following is my favorite method to prepare it.

You have some options to slow-cook

Crockpot – Cover and slow cook for about 8 hours on low. This is a long but really effective way to make the consome.

Instant Pot – Cover and pressure cook for around 45 minutes on high. Let the pot get naturally released. This is an ideal cooking method, given our fast-paced lifestyle.

Stockpot – Cover and cook for 4-6 hours on low flame. However, make sure that you constantly keep checking on the consome to prevent the meat from burning.

Oven – Place the meat covered in sauce on a baking dish. Cover the dish with foil and refrigerate it until the meat absorbs all its flavor. Preheat your oven up to 350º F, and then bake the sauced meat until it gets tender.

You may also follow the below-mentioned tips to prepare the best Birria Consome:

This is an additional step I personally like to follow – after making the soup from the sauce and shredding the meat, I combine them and let them cool. This, in my experience, has helped a lot with the meat remaining succulent for longer.

It is important to keep checking on your consome to ensure that the meat doesn’t get burnt. Remember that the cooking duration I have mentioned in the recipe can vary with the meat (and its processing) you use. I have mentioned it with reference to goat meat.

Cut Down on Cloves

If you aren’t a huge fan of cloves, I suggest you cut down on the amount, or not use it altogether. Sometimes, its taste can get very overpowering. Moreover, cloves leave a strong after-taste, that isn’t very likable.

If you’re looking for more spice and tang in this dish, see if you can mix and match other peppers apart from those mentioned above.

You can go with Habanero peppers, Fresno peppers, Jalapenos, and Serranos, too. This does wonder to the dish. You’ll have to test with different proportions to match your taste buds. 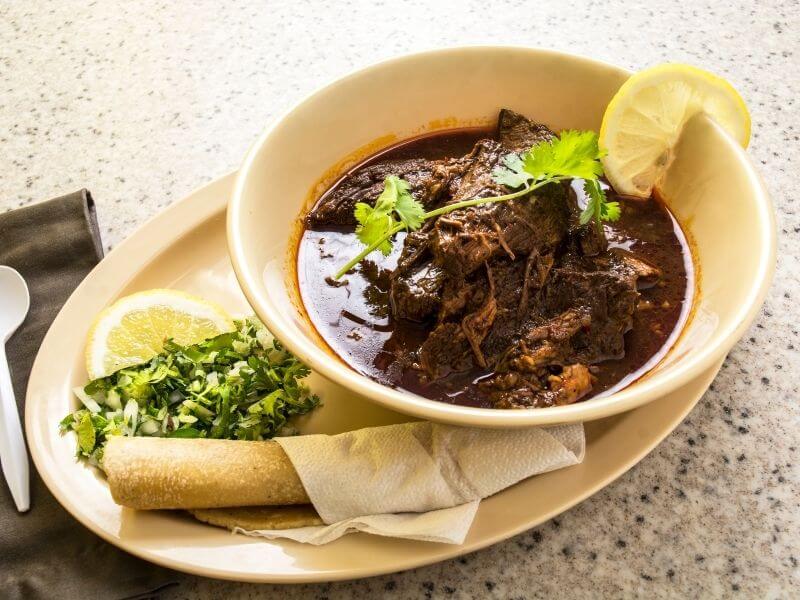 Birria consome is not the healthiest of Mexican dishes but you can savor it once in a while. Right from the grease to the peppers and even to the meat, the ingredients seem pretty risky.

The consome has an extremely high-calorie density, with a high proportion of saturated fats, carbs, sodium, cholesterol, and sugars. On the other hand, it is also nutritious – it is rich in iron, vitamin A and proteins. It also does not have any fiber content at all.

I have mentioned below the quantitative descriptions of the nutritional value of Birria Consome.