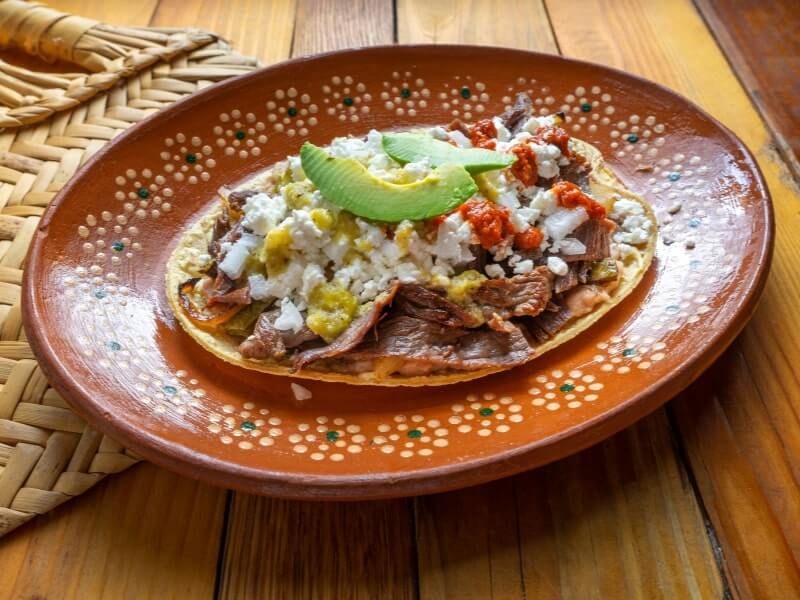 If you’re a person with a great appreciation for different kinds of food then you’ll love this piece about a delicious Mexican dish that’s been in existence for years. Huaraches Food is something that is very popular in Mexico and it is worth trying it out.

Mexico is a country with rich heritage and culture and the food is part of it. Mexican food exists in diversity and the recipe for each one varies with the different regions. Food from Mexico is very popular globally with many enjoying easily available ones such as guacamole, chilaquiles, and tacos, just to mention a few.

Have you ever heard of huaraches? Not the footwear but food?

Well, today we discuss huaraches food, what it is, its origin, certain characteristics or components and we give you a recipe you could try so that you get a taste of this Mexican food without having to travel all the way to Mexico for it. 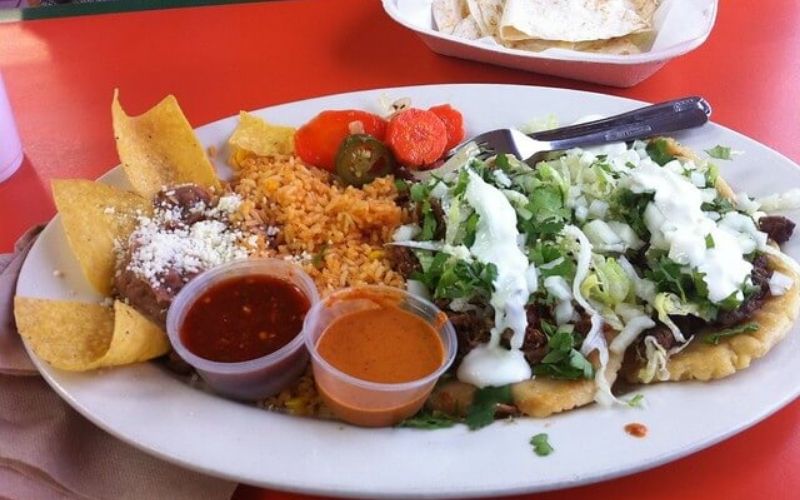 What is Huaraches Food

Huaraches Food refers to thin Masa ovals which are shaped to look like the sole of a Mexican type of sandal known as Huarache.
It’s a popular Mexican dish that is made up of Masa dough, alongside smashed pinto beans placed at the center, and then shaped into an oblong.

The fried masa base is often topped with red or green salsa, potato, onions, cilantro, and different protein and then queso is used for the finishing. Huaraches are most popular in Mexico City and in areas in America that have a large population of Mexicans living in them. 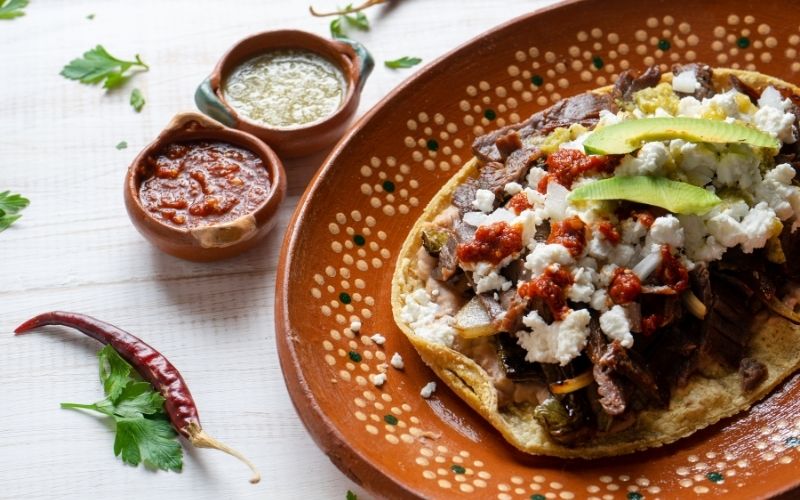 Huaraches Food originated from Mexico City back in the1930s. It is said that the popular Mexican delicacy’s origin was along a navigation channel called La Viga. It was at a store where a lady, Mrs. Carmen Gomez Medina would usually prepare tlacoyo, another Mexican delicacy.

This channel was covered to create the Calzada de la Viga, forcing the lady to move to another location. After 1957 she moved to the Mercado de Jamaica and later to a street called Torno.

There was something about her new food invention. It was shaped very differently compared to the normal tlacoyo or sope and people started calling it huarache.

Another version of the story is that it all started in 1895 during the times when Mexico City looked a lot like Venice, full of canals. A lot of people from southern Mexico City had farms so they’d usually sell their produce every day in the city center.

On the Island of Xamayca (Jamaica), local women would sell a dish made of masa (corn dough) with smashed beans in the inside and a cactus topping along with some sauce.

One day, when a flower seller noticed how huge the dish he was served was and how unusual it looked in terms of shape, he was so amused. He made a joke out of it saying the woman had made a sandal so big it was the size of his foot.

The lady told him the dish was really called huarache, like the sandal, in honor of people who worked hard every day just like the flower seller. The huarache sandals that the dish was named after are said to be related to the Nahuati’s Castle.

Their name, huarache came from the term “kwarachi” from the language Purepecha and it translates to sandal in English. 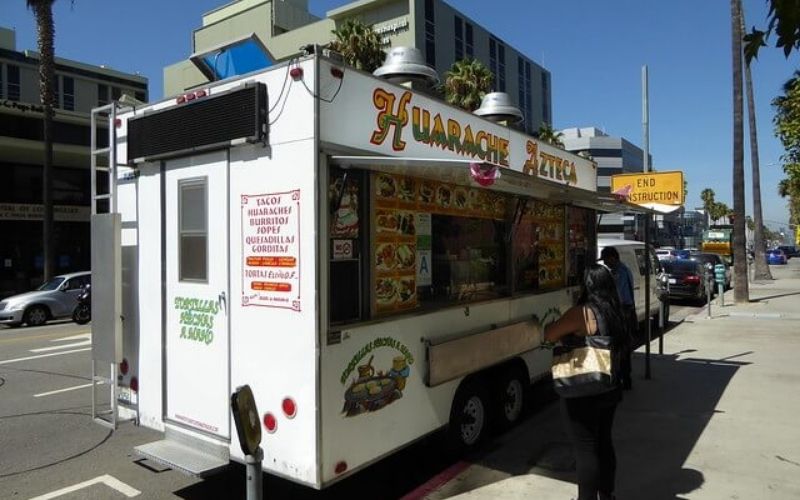 We have mentioned already that the huarache looked very different from sopes, but people still confuse the two. What are sopes? Sope is a traditional dish, also Mexican, whose origin is the center and southern Mexico where it was also known as pellizcadas.

At first sight, it actually looks like an unusual tortilla with some meat and vegetable toppings. It’s also made with masa just like huaraches, but of ground maize that’s been soaked in some lime with the sides pinched.

It’s topped with beans that have been refried, lettuce, onions, cheese, green or red sauce, and acidified cream. Roughly, their size is that of one’s fist.

So while huaraches are normally stuffed with mashed beans and are flat and ellipsoid shaped, sopes are also flat but more circular and contain a mirror of watery mashed beans and the same kind of toppings. Sopes are smaller in size compared to huaraches. 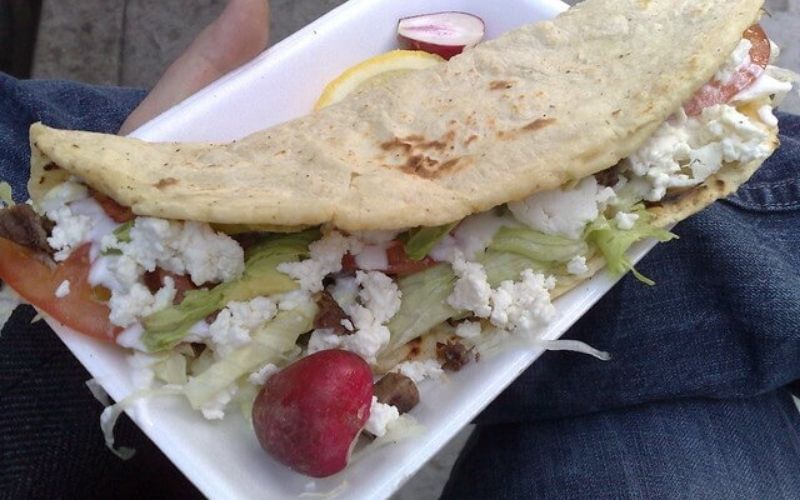 If you’re wondering how to make this Mexican delicacy, here’s a recipe for you. 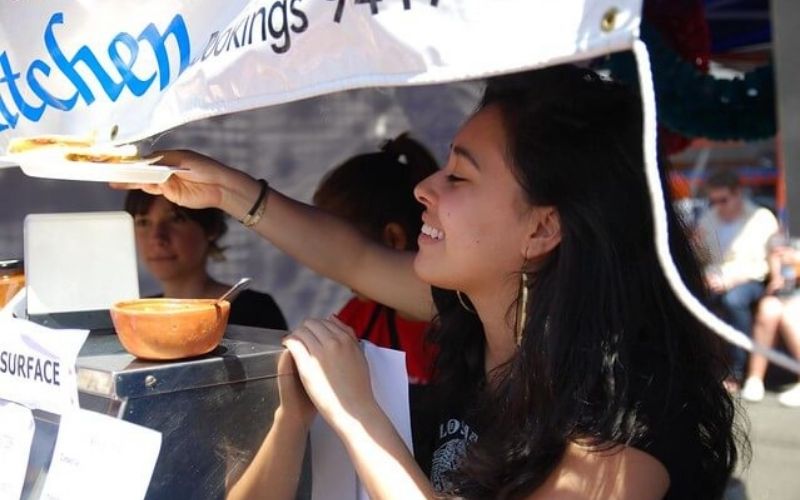 The huarache food recipe above involves some refried beans and if you’re wondering how those beans are prepared, here’s how:

1. You simply take a large size stockpot and add the beans. Take twelve ounces of oil, half an onion, some salt, and two gallons of water. Boil it then lower the heat and let it simmer for two hours. Once it’s well cooked, strain it so that just the beans are left.

2. Add the remaining oil, which should be six ounces, to a large frying pan over medium heat. When the oil is warm enough, add the diced onions then your beans. Use a potato masher to mash the beans and in the process, keep adding the bouillon and mixing it around properly.

3. Reduce the heat to the low setting and cook for about fifteen minutes until all the moisture is evaporated and your beans are thick enough.

That’s pretty much it for the refried beans you use in your huaraches.

How to eat Huaraches Food

First, you can eat your huarache with a fork and knife, but this is not compulsory. You can use your hands too (and you should!)

A Great combination is with a fresh pale ale beer or lemonade.

Hold the huarache in both hands, taking a bite from one of the two ends. They are so easy to eat even when you’re on the go and you don’t have to fold it down either while you’re eating it.

With the recipe above, you should be able to enjoy a great serving of huaraches whether by yourself or with friends. Huaraches are very unique and worth a try.

You will definitely enjoy making some considering you have many options for the proteins you can use including chorizo, chicken, carnitas, or ground beef.

It also allows you to use various vegetables such as avocado, tomatoes, onions, or lettuce for the toppings, vegetables that are great for your health. It’s definitely a dish worth trying as it allows you to be versatile and to use your creativity to the maximum.

Frijoles Charros – One of Mexico Most Loved Dish.

6 thoughts on “Huaraches Food – True Mexican Delicacy [What it is, Origin and Recipe]”