The gorditas de nata is a traditional dessert dish in Mexico. It is a sweet cake that resembles a tiny yet very thick pancake. It is prepared using clotted cream (called “Nata” in Mexico) from milk, sugar, white wheat flour, and cinnamon. The dish is a famous street and market treat across Mexico City.

Gorditas de Nata has an appearance close to that of the Mexican tortilla, but the gorditas de Nata is relatively thicker. The diameter can range between 4 and 12 centimeters. The seasoning may vary depending on which region of the country.

Although you may not miss them on various streets and corners of Mexico City, these treats are gradually disappearing. Those in many streets lack the vital ingredient, nata (clotted cream). In this article, I will share with you the original recipe so you can enjoy the rich and classic Gorditas de Nata. I will also share how to make the nata first, and then we will use it to make the gorditas. 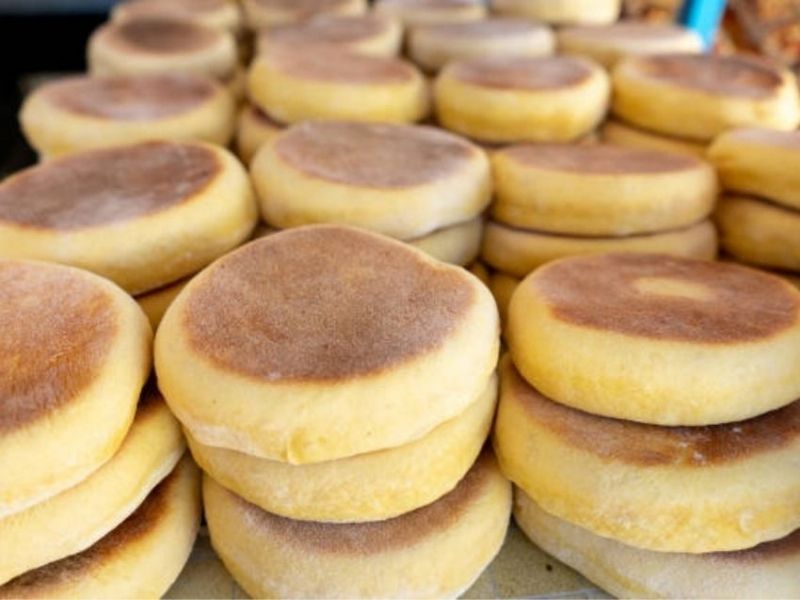 While it is somewhat hard to trace the exact origin, most texts suggest that Gorditas de Nata may have evolved from the Mexican pre-historic culinary. In pre-Hispanic Mexico, a great diversity of tortillas were made possible by mixing corn with different ingredients.

Wheat was not yet available in Mexico until after the country’s colonization. The original dish may have been prepared with masa and stuffed with meat, cheese, or other fillings. The dish Gorditas de Nata was born after introducing European ingredients into the country.

Others believe that gorditas de nata may have originated in Pachuca Hidalgo. The dish was among the many party bread consumed during town fairs. Some creative traders came up with the idea of packaging gorditas de nata in small bags (containing five or ten pieces).

They then sold the wrapped snacks to the foreign truck and private car drivers and passengers stuck in traffic on the Mexico-Pachuca highway during road closures. Today, you will still find some people selling gorditas de Nata in the streets of Mexico City.

Traditionally, the dish was commonly consumed during the marking of the day of Our Lady of Guadalupe, celebrated on December 12. Lady Guadalupe is a pre-Hispanic female fertility deity connected to the earth on the Tepeyac hill. The partakers of the faith later changed her name to the Virgin of Guadalupe.

Gorditas de Nata and various corn-derived dishes were among the food offerings offered during the celebration. For this reason, you will find some people referring to the dish as Gorditas Guadalupanas. As of 1895, the Guadalupe pilgrims visiting the Basilica of Santa Maria de Guadalupe preferred to eat gorditas de Nata prepared by the town’s inhabitants.

Today, the dish is a typical snack and breakfast dish across eastern and central Mexico. It is sweet with a light flavor, and many people love to accompany it with a hot beverage. The significant difference that makes Gorditas de Nata stand out from other Gorditas and buns is the cream in the recipe. Many desserts use whipping cream, but I am not alluding to whipping cream for this recipe, but clotted cream. 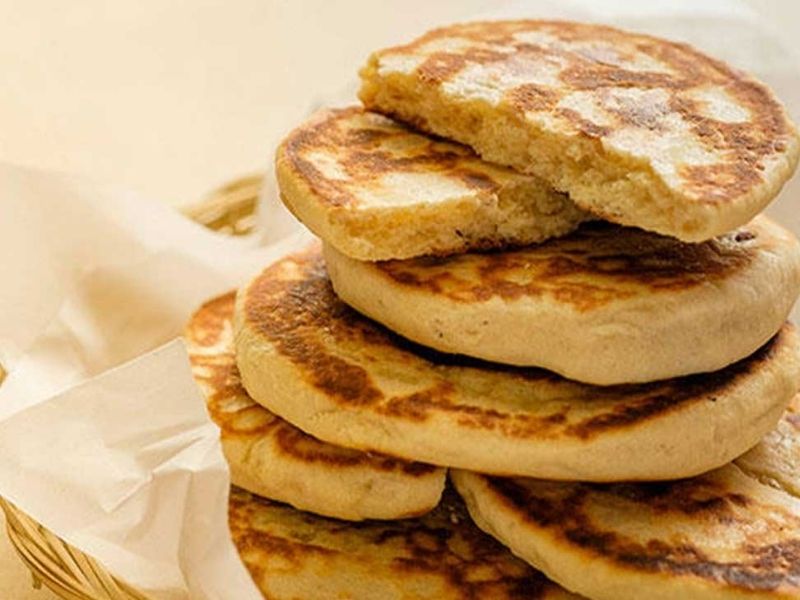 Gorditas de Nata Sinaloa is a delicious fatty nata bits prepared according to the Sinaloa style. They are pretty similar in appearance but differ in the leavening agent used. The same ingredients used in gorditas de nata are used in Sinaloa gorditas.

However, the Sinaloa recipe uses yeast (unlike baking powder or soda used in Gorditas de Nata) as the leavening agent. Both are cooked on a non-stick griddle or skillet without adding any oil. 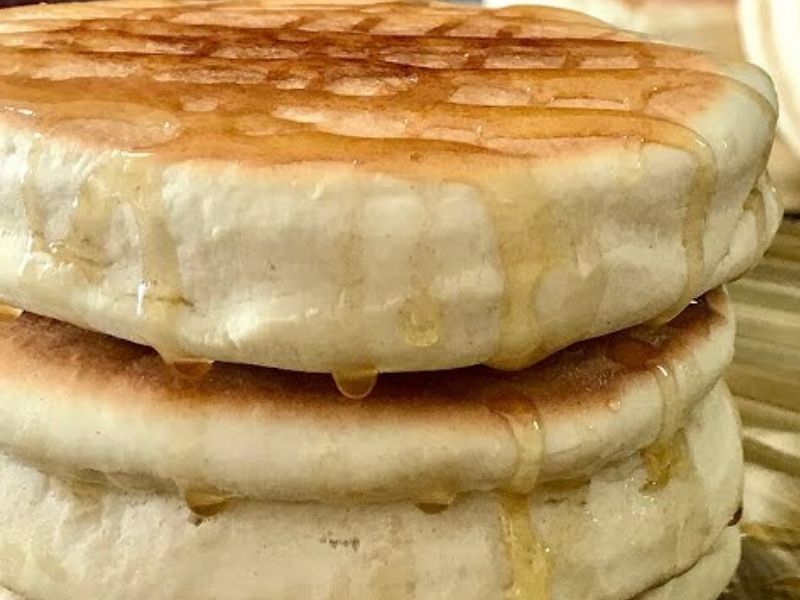 These gorditas de nata may have their origin in Michoacan. While they may resemble other Gorditas, this one is unique, thanks to the vanilla flavor included in the recipe. You are free to add or leave out sour cream or liquid milk for this recipe as you find it necessary. Unlike the Sinaloa variety, this recipe uses baking soda and baking powder as leavening agents. 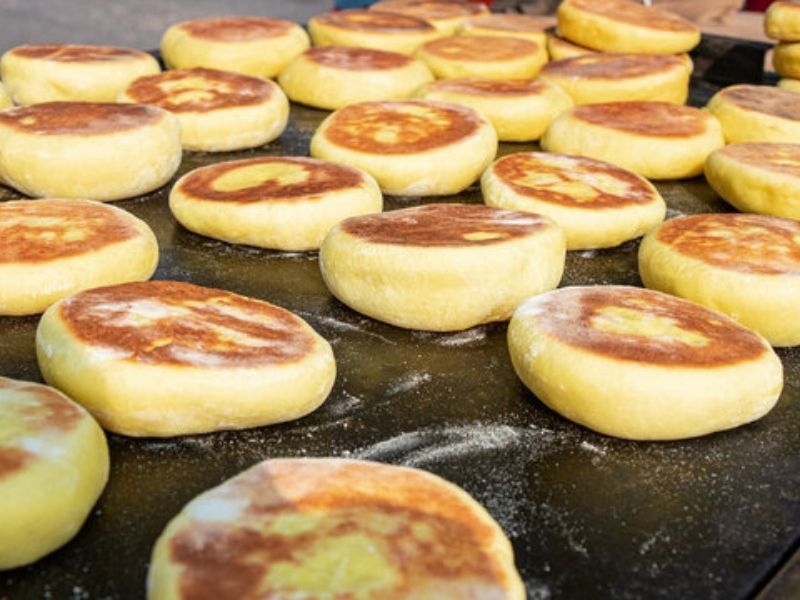 Let us start with the nata; remember, it is an essential ingredient for the original Gorditas de Nata. Maybe you are wondering; what is Nata? Nata is a spreadable form of heavy cream derived from raw cow milk. It is clotted cream, the layer of fat you skim from milk after boiling and cooling it.

Preparing clotted milk takes a long time but is primarily hands of and worth the wait – it creates a delicious flavor in these fatty gorditas. It is important to note that the yield per liter of milk is not that much, which explains why you get it at a higher price from the stores.

Ingredients for the Nata

You can make these tasty treats whenever you want. They are pretty easy to make, and the ingredients are readily available in your local stores.

An oven thermometer is a convenient kitchen tool in the clotting recipe. If your oven does not maintain the ideal temperature, your cream will not clot.

Some ovens have an inbuilt safety feature that turns them off after prolonged periods. For such ovens, you may prefer to clot your cream during the day, when you can monitor and keep your oven on during the entire 12 hours.

Do not doubt yourself if you get yellowish cream. This is okay, especially for clotted milk prepared at home. The cream contains high amounts of butterfat, contributing to the final product’s pale yellow color.