Beef Stroganoff – A much beloved dish worldwide. [Curiosities and Recipes] 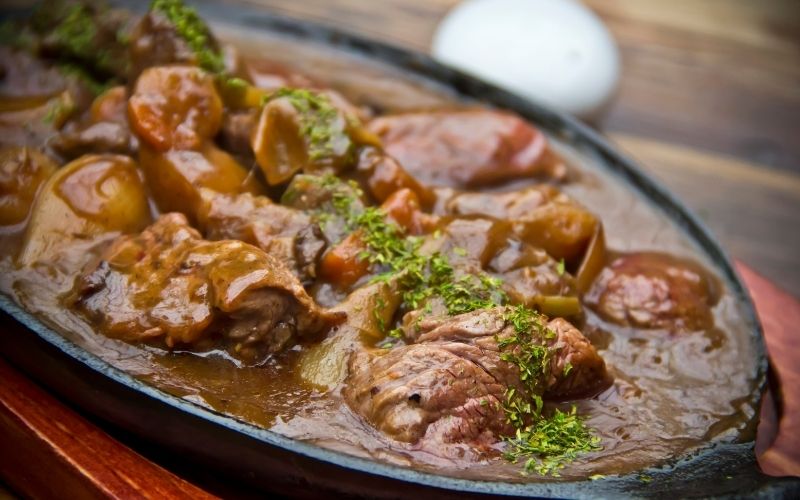 If you’re a foodie like me and enjoy trying out different recipes, then you’ve probably come across beef stroganoff. If you haven’t, then worry not, this article will tell you just about most of what you need to know about it.

It’s a dish that you’ll love if you particularly enjoy your plate of beef. This dish is of Russian origin. Interesting right? To make it, the beef pieces are sautéed then served in a delicious sauce alongside sour cream, fondly referred to as Smetana. 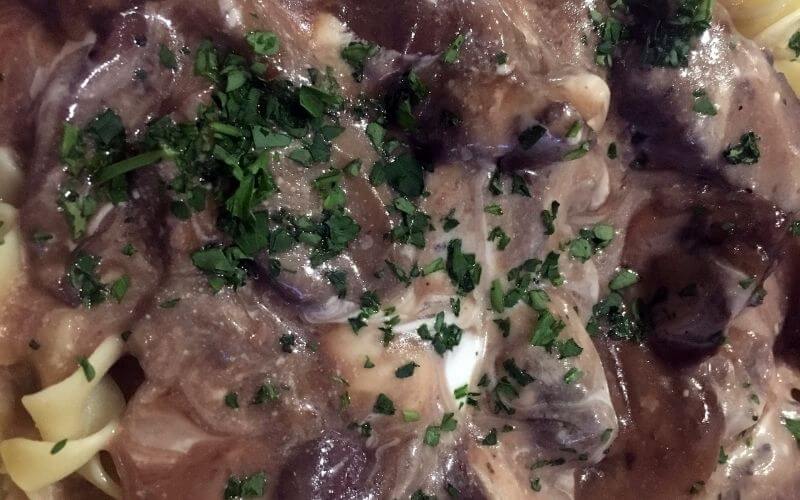 Where did Beef Stroganoff originate from?

Every dish has an origin and a great story behind it. Beef Stroganoff is no exception. In some cases, there’s more than one story depending on which part of the world the story came from. In this case, the most accepted story is that it’s of Russian origin.

Legend has it that beef stroganoff was first made by a French chef named Charles Briere in 1981. He’d been working for a wealthy family in the city of St. Petersburg and had created the dish as a submission for a cooking contest. Back then, it was customary to name the winning dish after your employer, and that’s what the chef did.  His employer’s name was Count Pavel Alexandrovich Stroganov.

According to some people, the reason why the meat slices were that thin was to accommodate the fact that Stroganov’s teeth were failing, understandably, because he was an elderly man. Rather convincing story don’t you think? After all, no one with teeth issues would like to use them on some huge chunks of meat. Anything to avoid the possible pain and to avoid losing them altogether.

It is said that the Stroganov family was one of the wealthiest in Russia. Such families were known to uphold a bi-cultural style of living. Since most of them loved Paris, it was common to find French employees in their homes. These included maids, governesses and chefs. This explains why Chef Briere ended up working in Stroganov’s home.

Briere’s famous dish the beef stroganoff was a true expression of the French-Russian way of life. The dish became popular in Russia then started spreading elsewhere after the fall of Tsarist Russia. The Chinese people would serve it in their hotels and restaurants especially before the Second World War.

With time, several immigrants came up with different variations of the dish and brought it to the United States.  After its arrival in the States beef stroganoff became even more popular. With time, the recipe for this beef stroganoff was placed in a cookbook in 1932.

Much later, whenever people would throw big parties, this beef stroganoff dish wouldn’t miss on the menu of the day. Why? It’s luxurious but at the same time so easy to prepare. Definitely something you and I would want of a dish, right? It also became a go-to in the most popular restaurants.

So, as you would expect, overtime the recipe has changed. People from all over the world have added other ingredients to this dish to make it suit their individual tastes better. For example, if you go to the US, most restaurants that will serve you this dish will have mushroom, some onion and sour cream sauce. Americans like it with their rice and sometimes with noodles. There also exists a Brazilian version of this popular dish. 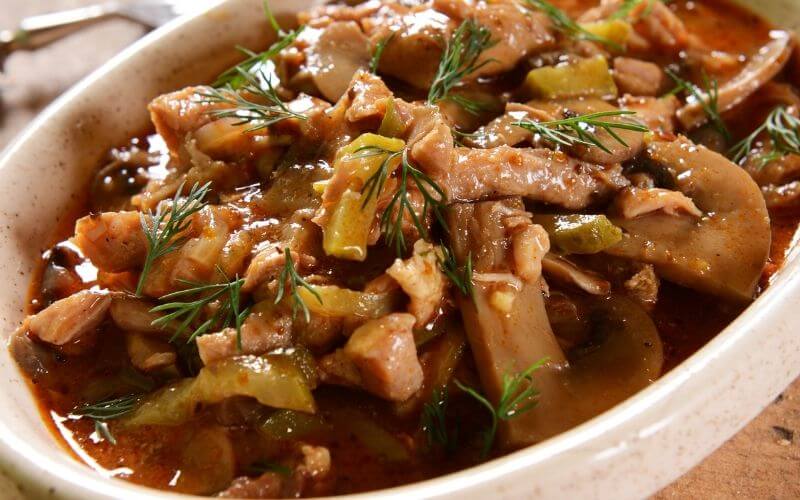 For some people, the joy of being able to prepare a dish is being able to do it in different ways. If that’s you then we have something in common. In that case, you will love that the Brazilian version of the Stroganoff is quite different from the Russian version. This means you can experiment and well, they say there’s something magical about this one.

This would explain why so many people love it. From young children to grown-ups. Those who’ve tried it say it’s one of the dishes that can easily please a crowd. In fact, the Brazilian stroganoff reminds me of celebrations because it’s commonly served in such gatherings. You just have to try it out yourself to prove just how good it is.

I like that it just takes minutes to make as it is simple. It’s made of very tender meat pieces that have been dipped in some creamy sauce. Brazilians call theirs Estrogonofe de Carne. The biggest difference between this version and the Russian one is that the Russian version uses either vegetable broth, beef broth, or mustard. It is then finished off with some sour cream.

Brazilian Stroganoff is typically served alongside some white rice and also potato sticks. It uses tomato sauce instead that’s been mixed with some heavy cream. However, you’re not limited to serving it exactly like that.

Feel free to tweak it a bit to match your creativity. For example, if you’re keen on watching your weight, you can simply replace the ordinary rice with an option such as cauliflower rice. Options that have less calories so that you’re able to watch your weight while you enjoy your food.

Brazilians like to make their version of the stroganoff with table cream to give it a long shelf life. It’s convenient considering you don’t have to keep it in the refrigerator. 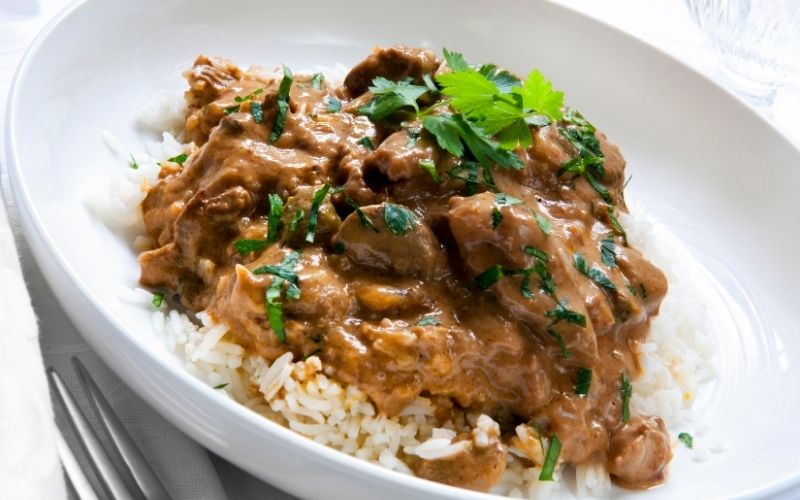 Beef Stroganoff is great for those days when you have a craving for some beef and noodles. However, with several people growing more careful about what they eat, it’s important to know just how healthy this dish is, how many calories it has, right? So, are the ingredients good for you?

First, beef is red meat and well, whether it’s healthy or not has been a controversial topic for a while. However, experts say that you can enjoy your red meat just as long as you’ve cooked it properly. Beef contains nutrients and the essential vitamins needed by your body for it to function properly after all.

We can benefit from the proteins found in beef too. The amino acids in it support the growth of muscles and tissue repair. If you’re like me then you give a lot of importance to your iron intake as well.

Beef is a great source of this and well you can take your beef in form of beef stroganoff to get that much-needed iron that will give you energy for your entire day. The iron is also great for your brain functioning. Beef Stroganoff will also help you get vitamin B12 that keeps your nervous system healthy.

Are the noodles healthy though? Yes, noodles also have their own share of health benefits. They may lack some of the major nutrients, but they do have micronutrients like iron, folate, manganese and some vitamins. So, while they’re normally considered a convenient food, you will benefit from eating it in your beef stroganoff. They help keep your energy levels high and then leave you feeling fuller for much longer.

In general, when you eat beef stroganoff, you’ll get some fats, cholesterol, carbohydrates, proteins and sodium. For a cup of beef stroganoff served that contains half a cup of noodles, you get 349 calories. In it, the amount of fats present is 12 grams. The cholesterol level in such a serving is about 78mg. 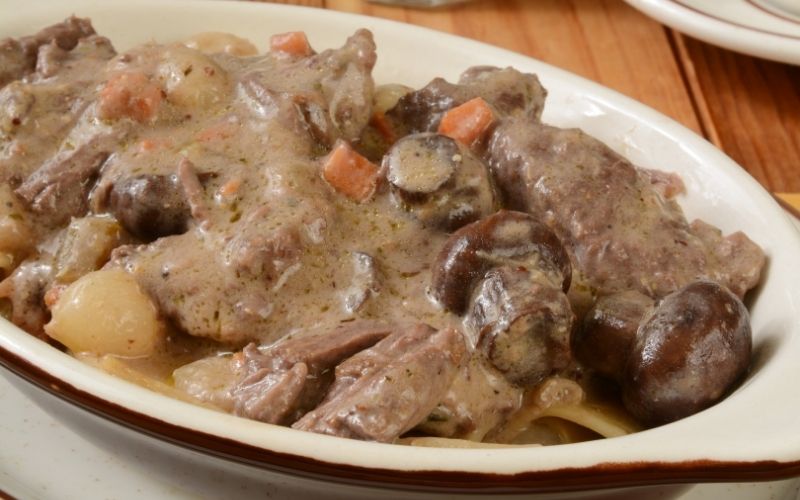 So here comes the exciting part. After so much talk about this dish and so much praise it’s time we shared the recipe so that you can try it at home. We’re giving you the classic simple recipe for beef stroganoff but feel free to add a few of your own tweaks to personalize this dish further

To make your classic beef stroganoff, you will need the following:

One serving of this dish will give you 435 calories and has a total of 23grams of fat.

As you can see, the dish is easy to prepare. It takes only a few minutes, allowing you to customize it accordingly. For example, you could:

Here are some tips that we love that will ensure your classic beef stroganoff will be even easier to prepare or will taste even better:

So, what else can you serve your beef stroganoff with? My suggestions include:

Other veggies on the side or a green salad so that you eat a more balanced diet.

You can also serve it alongside your favorite type of wine.  This is regardless of whether the wine is white or red. We can assure you the combination of their different tastes is like nothing you’ve tried before. Simply delicious.

If you have a sweet tooth, you will enjoy balancing out the savory with some sweetness. For example, serve it with some cookies, or any other type of dessert you love to eat with a good meal.

Well, that’s just about everything we could slot in here about the beef stroganoff. You should definitely try it. It’s amazing how just a single dish could uplift your spirits and well, this is one of them. With it, you get a win-win situation because it’s easy to prepare and also takes a short time but most importantly, the beef stroganoff is delicious.

Other Popular Articles About Traditional Food from around the world

Kishka – The Sausage Enjoyed by European and Eastern Countries

1 thought on “Beef Stroganoff – A much beloved dish worldwide. [Curiosities and Recipes]”