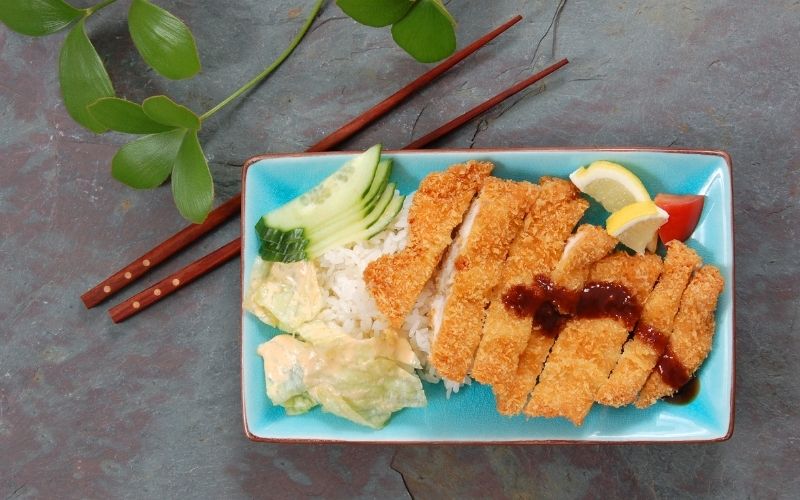 Well.. everyone around the world who’ve had some kind of interaction with Japanese culture will tell you they love it. There’s just something about it that’s so fascinating. From the Japanese hospitality that makes everyone feel at home to their art. Their traditional dressing is also incredibly unique but to a food lover like me, it’s the Japanese cuisine that’s most attractive. Chicken Katsu seem a simple thing to cook, but is more than that.. I can guarantee you that!

Japanese food is actually looked at as a healthier option compared to western food but it is also tastier. From sushi to gyoza or any other food that comes to mind, you will love it. Today though, I would like to talk about a dish called chicken katsu. Have you heard of it before? Well, it’s basically fried chicken that has been made with some panko bread crumbs. The Japanese like to serve it alongside tonkatsu sauce.

Tonkatsu sauce, in case you didn’t know, is a fruit-based type of brown sauce that is also of Japanese origin.  In this article, I will give you details of the origin, the recipe and so much more regarding this chicken katsu dish. 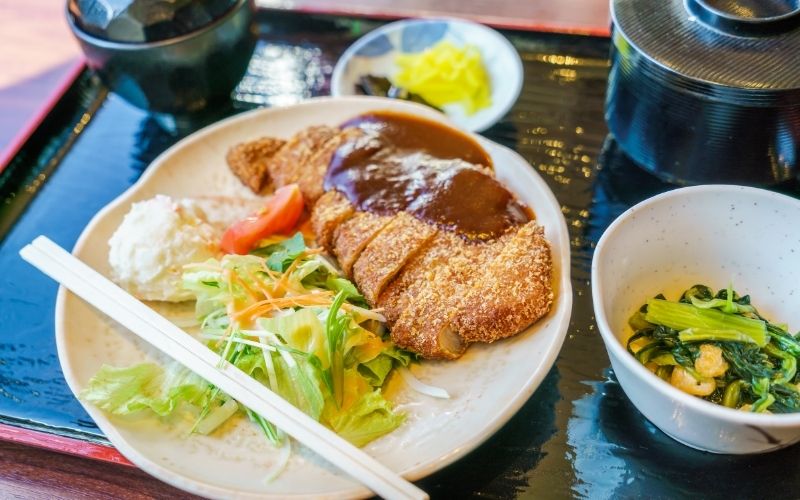 While it’s great to enjoy a good dish served in front of you, it’s also worth knowing where the dish came from. Well, every great dish has a good story behind it, one that will probably make you appreciate it more. So, where did chicken katsu come from? What’s the magnificent story behind it?

First of all, the term katsu generally refers to a fried meat cutlet or seafood that is the epitome of comfort foods in Japan. It is made with panko bread crumbs which are flaky and well, I must say they are also of Japanese origin. In Japan, katsu is quite popular among people of different ages from children to adults. In appearance, it is quite similar to the German schnitzel.

Safe to say, it is one of the western foods that the Japanese fondly adopted and customized to suit their own local tastes. As a result, it has become a big part of their cuisine.

The katsu comes in different varieties, including the chicken katsu that we’re talking about today. The chicken katsu variation is a boneless chicken crusted with panko crumbs and deep fried accordingly. Several people like their chicken katsu made healthy with some tender chicken breast. That said, you can also use chicken thigh if you want to make it juicier.

Katsu was first created in the late 1800s at a restaurant  in Tokyo. They were looking to add a meat cutlet that was more European in style to their menu. Today, you can easily find it in the different variations such as chicken katsu anywhere on the street. You can find it in bento boxes, in different eateries and also in fancy restaurants.

What everyone is always looking for in a dish aside from a delectable taste is its ability to satisfy you. Well, the chicken katsu is highly satisfying. It’s a great treat that can be served alongside some cabbage preferably the finely shredded type, some thick katsu sauce, and a distinct Japanese curry. You can serve these on top of some hot rice or you can serve it as part of a sandwich.

If you go with the latter, it simply means you put it in between thick bread slices. 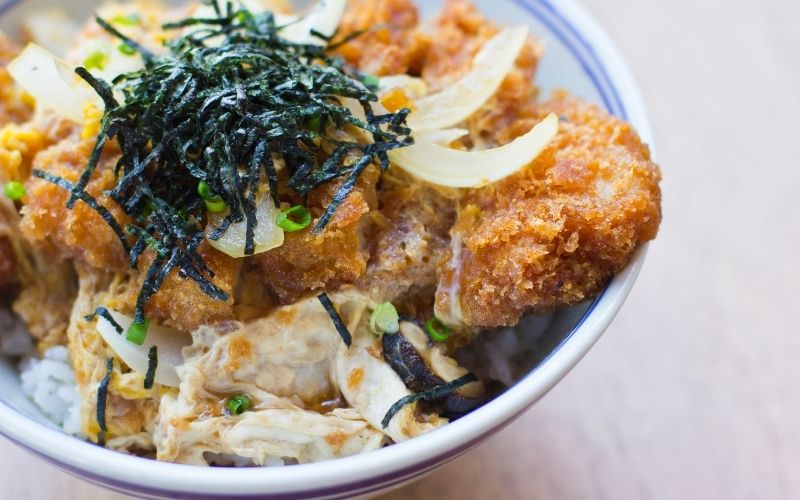 The chicken katsudon is one of Japan’s most popular rice dishes. It’s a dish that balances out sweet tastes and salty ones. The textures of this dish are simply delightful. If you’re a big fan of chicken, then you will appreciate that in the dish, you will find it fried. Sounds tasty right? You will also find a great size of fat rice grains well blended into eggs.

For that finger-licking taste of chicken katsu don, I’ll advise you to eat it hot. The chicken katsudon exists in a number of variations depending on the different regions of Japan. The most popular one though is the one made with a bed of rice and has chicken cutlet toppings simmered in a tasty broth. The broth contains eggs and onions. So, if you’re really keen on avoiding any wastage in the kitchen then this is a nice way to make good use of your leftover cutlets.

Generally, katsudon means a cutlet rice bowl. Funny, it’s often served before one faces a huge challenge in their life just because its pronunciation is quite similar to the pronunciation of the Japanese word for “win.”

Originally, the katsudon was tonkatsu that would be dipped in some sauce and would then be served with some rice. Today, most people will tell you that it’s still unclear how it evolved into the simmered dish we know it to be today. Some will tell you katsu was first made in 1921 at one of the soba restaurants known as Sanchoan.

According to them, this restaurant would serve tonkatsu in the evenings and since the cutlets were not well fried, they would automatically become leftovers. One day as the chef was bemoaning a large amount of these leftovers in the morning, one of the college students who had stopped by told him that he’d eat this uneaten batch of tonkatsu.

He’d only do so if the chef prepared them for him with some egg. He also suggested that after the preparation the chef should serve it over rice, and that’s how things unfolded. 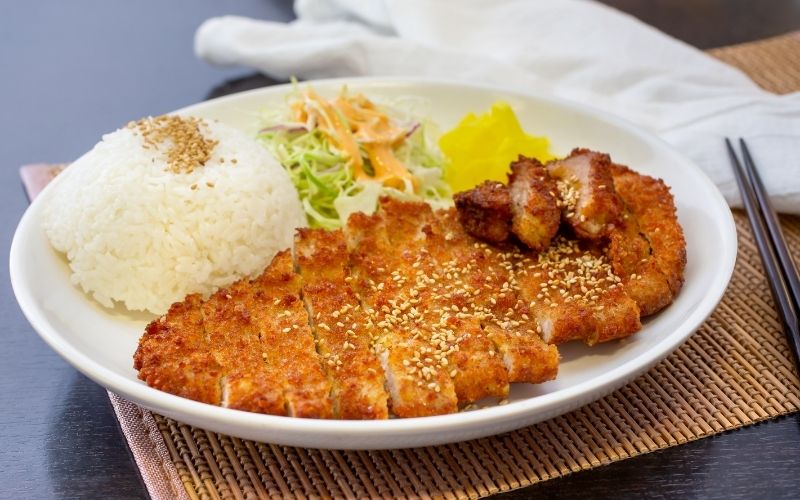 Chicken katsu sauce is a barbeque sauce for fried chicken made in Japanese style. It is made predominantly with some Worcestershire sauce, sugar, soy sauce and a few other seasonings. It has a unique taste especially because of the Worcestershire sauce. This sauce is actually both sweet and salty at the same time. Amazing right? It’s also quite thick.

So you can make this chicken katsu sauce by yourself at home. However, if you don’t have much time in your hands you’ll love that the sauce is available in most Japanese stores. So you could just buy yourself some and use it. 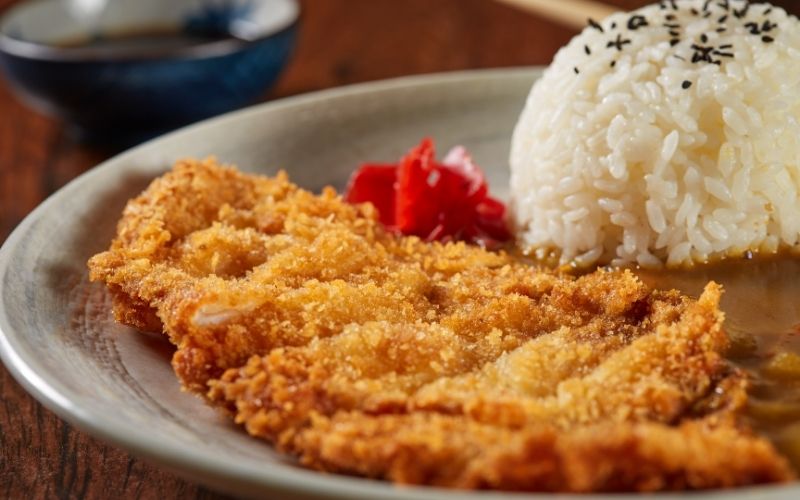 Here comes the most interesting part of this article, the dish preparation. If you’re into Japanese food then you already know that this chicken katsu curry is not only tasty, but it is also generally wickedly wonderful. When compared to several other curries, it stands out because for it, you first have to bread the meat and fry it before you add the delectable silky sauce over it.

This is an amazing comfort food and the best part about it is that you can actually make it by yourself at home.

The recipe below will take you just 15 minutes to prepare, and 30minutes to cook. It will take just about 45 minutes in total for it to be completely ready.

This recipe serves 4. Serve it with some white rice.

For the Breaded Chicken 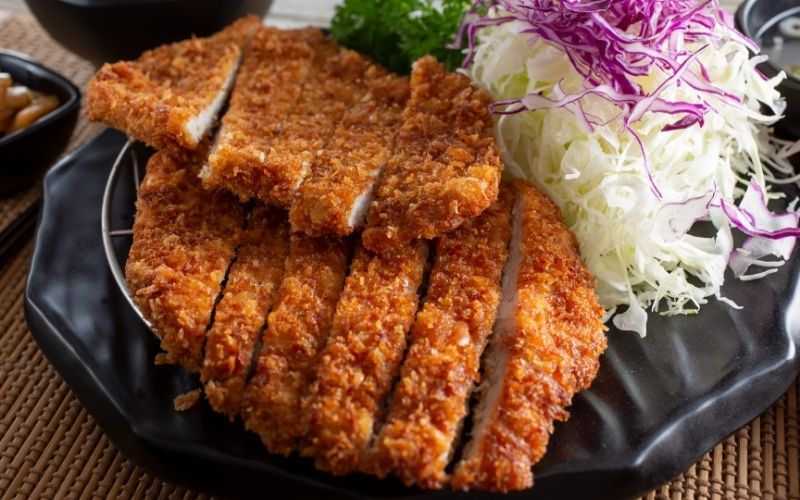 Can you believe it’s that easy to make? Just a few steps and short minutes and you will be enjoying this amazing Japanese dish. There are still some things you could do while preparing your chicken katsu curry. Look at them as a few more tips. They include:

With this dish you are highly likely to join the long list of people that absolutely love Japanese food. It’s a dish with the right balance of both sweet and slightly salty tastes that will leave you wanting more. It has a distinct taste, one that’s unforgettable. The dish is also great if you like to include as many healthy ingredients as possible while you cook. Most of all, the dish has an amazing history that you can share with those who will be enjoying your cooking.