Tortelloni – If you never tried them, you seriously should! [with Recipes] 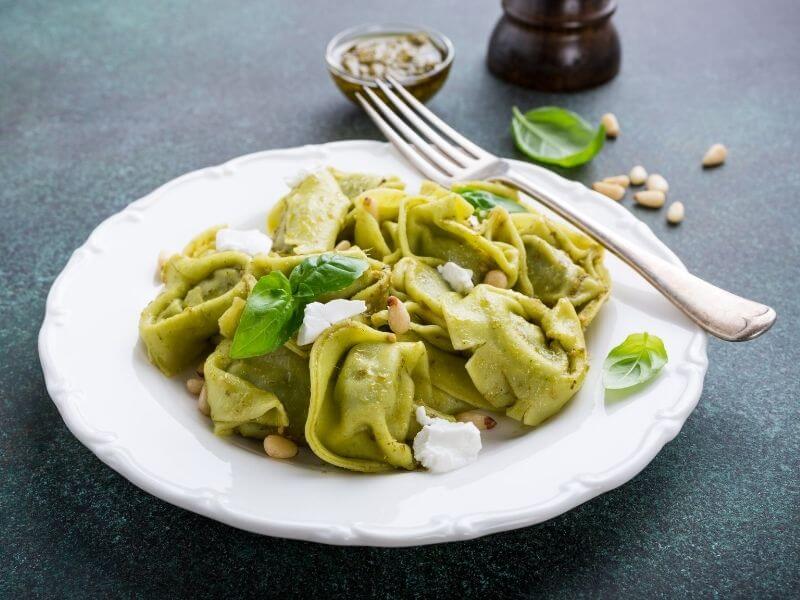 Are you or your family bored of having the same meal week after week? Are you curious to take your first steps into the world of pasta making, but unsure of where to start? If you are looking for something new to try for dinner this weekend, we will introduce you to the historic and delicious tortelloni.

From its humble beginnings in quaint Italian homes, tortelloni has become a scrumptious addition to kitchen tables across the world. This pasta dish is a larger variant of tortellini, and while it is made in the same shape as tortellini, tortelloni traditionally does not incorporate meat.

Tortelloni makes for a splendid meal that can include a number of filling ingredients, such as ricotta cheese, amaretti biscuits, nuts, fruits (like pumpkin), herbs, and leaf vegetables, making it suitable for a variety of dietary preferences.

Due to its large size, it is more common to eat just a few tortelloni in one sitting, though it may be tempting to add more to your plate. When you are looking for a cozy meal to bring you warmth on a cool evening, Tortelloni provides soft pillows of delectable comfort to fill your belly with pasta goodness. 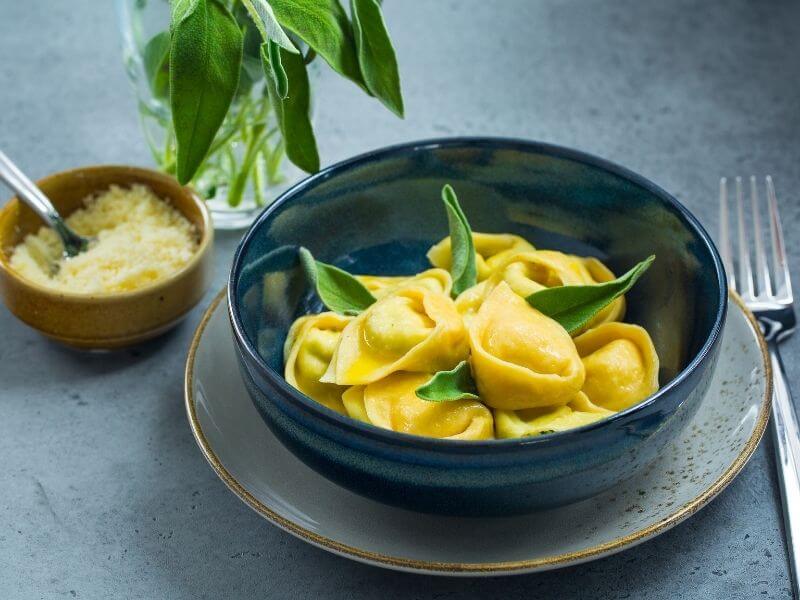 Tortelloni originated in the Bologna area of Italy. The name is derived from the Italian term for pie or cake, which is “torta”. While this term is commonly associated with desserts, it can also describe a savory pie. From “torta”, the word “tortello” is born, which translates to a small torta, but describes a fresh egg pasta shaped like a pocket with fillings.

From there, we get the name for tortellini pasta, which is egg pasta formed in a dumpling-like shape and filled with meats and served in a broth with Parmigiano cheese. There is a fun legend often told to explain the history of tortellini. It is said that Venus was traveling and took refuge in an inn for the night.

In some tellings, she is accompanied by male companions into her bedroom, in some tellings she is alone. At this point in the tale, she either has her male companions leave, or she becomes frightened and calls for the innkeeper to help her. Either way, the innkeeper comes to the door to peek in and catch a look at the beautiful Venus in her room, and he peers through the keyhole in the door.

Through that small opening, it is only possible to see her navel. After seeing such a majestic sight, he rushes into his kitchen and tried to recreate the delightful shape of her navel into a pasta form, which results in the tortellini shape.

While this story is just that, a myth, it is generally accepted that this pasta was created centuries ago, in the north of Italy, the Emilia-Romagna Region. From tortellini, we then see the emergence of tortelloni, which is a larger variant of the tortellini pasta. 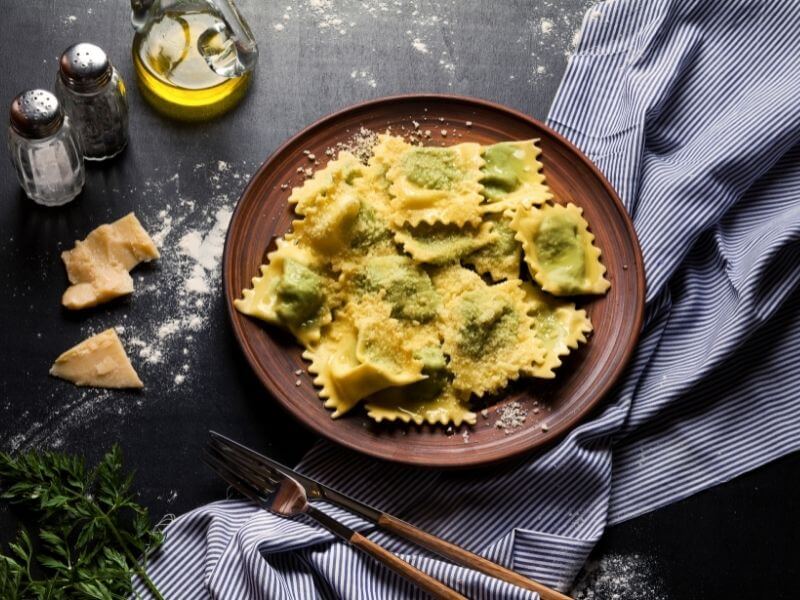 While we have already explored the differences between tortelloni and its sibling or cousin pasta, the tortellini, there are many other Italian kinds of pasta that resemble tortelloni, as they are also pasta that contains pockets of fillings. One such pasta is the popular ravioli. While they are similar in regards to containing filling pockets, it is important to note the many differences between tortelloni and this staple Italian pasta.

The most obvious difference at first glance is the shape of the ravioli pasta. Ravioli has a traditional flat, square form that is very distinct to tortelloni, as the filling is sealed between two layers of pasta dough. The sides of the ravioli pasta are commonly trimmed in a triangular pattern all around the sides, which makes the pasta appear more elegant.

The tortelloni pasta, on the other hand, is formed into more of a dumpling shape, as the filling is sealed between two sides of the same dough piece, which is in turn folded over on itself, forming a hat-like shape. The edges of the tortelloni pasta are smooth and flat. Tortelloni is most commonly served with a butter and sage sauce or tomato and butter sauce, with only a few pieces in one serving due to its larger size.

Ravioli can be made in whatever size suits your fancy and is commonly served with a ragu sauce or in broth. Another key difference between the two is in the filling. Tortelloni filling is traditionally focused on cheeses, pumpkin sauce, and leafy greens. When making ravioli, you can incorporate meat into its filling, as well as whatever else you like! 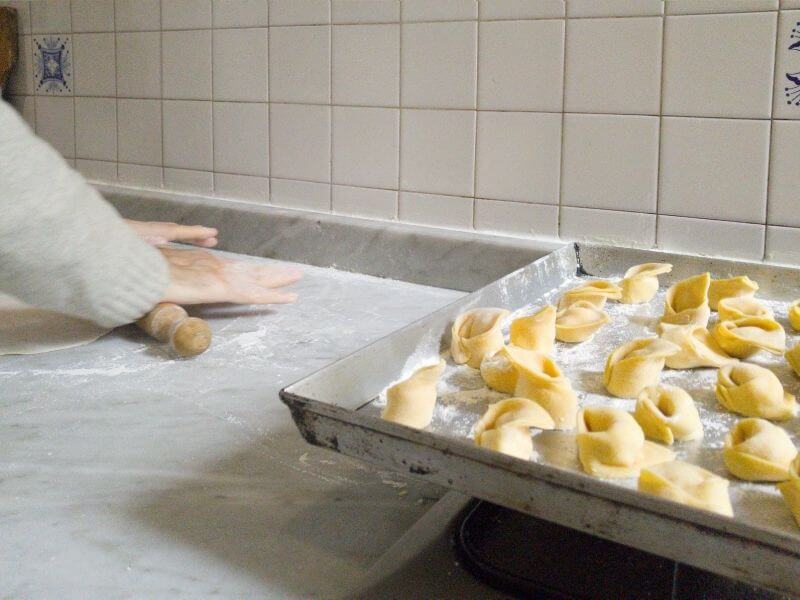 How to Make Tortelloni

Before we begin, please note that you will want to have a pasta machine on hand. You also may be interested in using a standing mixer with dough hook when making the dough, and so if this is the case, please be sure to have this appliance on hand.

There are a few methods that one can employ in order to make the dough for the tortelloni pasta. One approach that is more “hands-on” involves pouring 400g of all-purpose flour into a mound on a clean counter or tabletop surface so that it looks like a mountain or volcano with a peak.

Then you will want to make a small well in the center of the mound, which is where you will put the additional dough ingredients. You will crack 4 eggs (at room temperature) into this well, along with a few pinches of salt and 1 tsp of olive oil (though this olive oil addition is optional).

After dropping the dough ingredients into the well in the flour, gradually mix the eggs, salt, and olive oil into the flour with a fork until all the ingredients are incorporated. If you don’t mind getting a little messy and using some elbow grease, you can then use your hands to knead the dough, using the heel of your hand to stretch out the dough away from your body and then folding it back onto itself repeatedly.

You will continue the kneading process until the dough is smooth and does not have any chunks of unmixed flour remaining. At this point, you will wrap the dough in cling wrap and refrigerate the dough for between 20 to 30 minutes. After refrigeration, it will take approximately 10 to 15 minutes for the dough to reach room temperature and be ready for use.

If you are looking to give your arms a rest and leverage culinary technology, you can add the dough ingredients into a mixing bowl with the dough hook attachment, and knead on speed 2 for 5 minutes. You will have to use a little elbow grease and knead for 2 more minutes by hand. After this, you will want to form the dough into a round ball, wrap the dough in plastic wrap, and chill in the refrigerator for 30 minutes.

While the dough is resting, you can prepare your filling for the tortelloni. There are a variety of options available to choose from for your tortelloni filling. Many recipes incorporate mushrooms, cheeses (such as ricotta and parmesan), spinach, and spices (such as nutmeg, salt, and pepper).

In certain regions of Italy, it is common to incorporate pumpkin into your filling. If you choose to go the traditional route, you will want to have a container of Italian ricotta cheese, about 50g of parmesan cheese, some pre-cooked spinach, salt, pepper, and nutmeg.

Once the dough has reached room temperature, you will want to divide the ball into smaller portions (up to 4). Roll out each portion using a rolling pin to flatten and shape the dough, creating a pointy end on one side. You will pass the dough through the pasta machine, pointy end first, starting on the widest setting and gradually working down to the narrowest setting.

You can sprinkle a bit of flour on each side of the dough to keep it from sticking to the machine. After about 8 times running the dough through the machine, you should have a rectangular pasta sheet about 1/16″ in thickness and ready for use, which you can set aside on a floured surface. Roll out the remaining dough portions.

Drop a rounded teaspoonful of your prepared filling into the center of each cut dough piece. Brush the edges of each dough piece with egg white or a small amount of warm water, then bring two opposite sides together. Press the two sides of the dough to form a triangle or semi-circle shape.

Then, take the corners furthest away from each other and pinch them together. The shape should resemble a triangular hat. After this point, there are recommendations to let the pasta sit out so that it dries slightly, as this may help the cooking process.

Bring a large pot of water to a boil, adding a few pinches of salt and some olive oil. When the water is boiling, add the formed tortelloni and cook for 3-4 minutes. When initially adding the pasta to the boiling water, it is helpful to stir the tortelloni around so that they do not stick to each other or the sides of the pot when they are still raw. 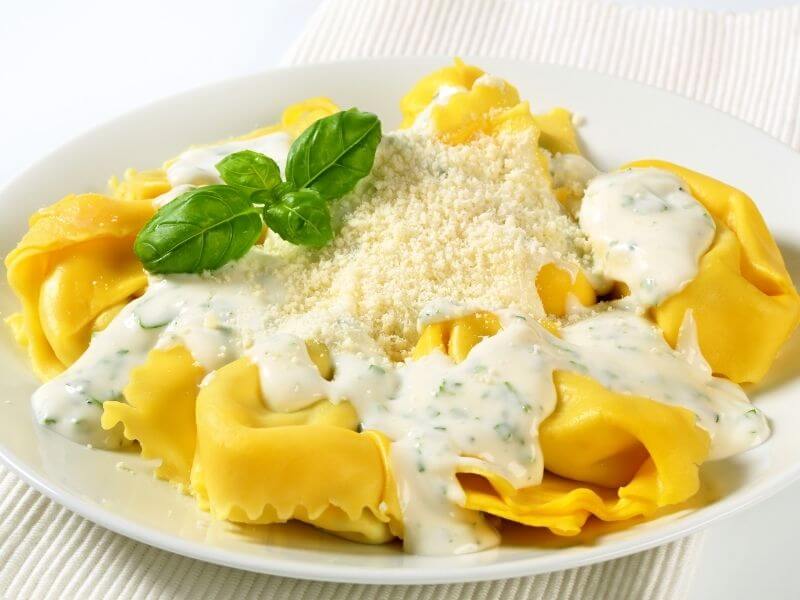 While you may choose to take some liberties in experimenting with the type of sauce that you want to make to pair nicely with your preferred filling, we have focused on a few recipes for more traditional sauces for tortelloni pasta.

This second option hails from the Bologna region of Italy and results in a rich, decadent sauce. To start, add a tablespoon of olive oil to a sauce pan over low heat. Next, add 2 tablespoons of butter (to stay true to the tortelloni roots, avoid using margarine!) to the pan. Stir in 3 generous tablespoons of tomato concentrate to the butter and olive oil.

While this mixture cooks, finely dice 2 large Italian or vine tomatoes and add to the sauce. To finish off the ingredients, add a little salt and black pepper, to taste.

When the sauce has been simmering on low heat for a few minutes, you can add a little bit of water to “open up” the flavors. Keep the sauce cooking on low heat until the ingredients have been incorporated into one another, except for some small pieces of diced tomato.

Tortelloni can make a delectable meal for any get-together or a standard family dinner. With a variety of options to use in the filling, and since it has a milder taste than other pasta dishes, even the pickiest of eaters will be asking for more.

If you have Italian heritage in your family, this meal could be a wonderful opportunity to connect with your roots and learn a staple of an Italian dinner table.

Making tortelloni can also be a fun activity for the whole family, as you learn to form the unique tortelloni shape and choose your favorite fillings. However you choose to put together a tortelloni meal, when you are able to get that first bite, you will be celebrating a rich history of marvelous food and culture.

Mafalde – The Italian Pasta You Haven’t Tried Yet! [with Recipe]

4 thoughts on “Tortelloni – If you never tried them, you seriously should! [with Recipes]”