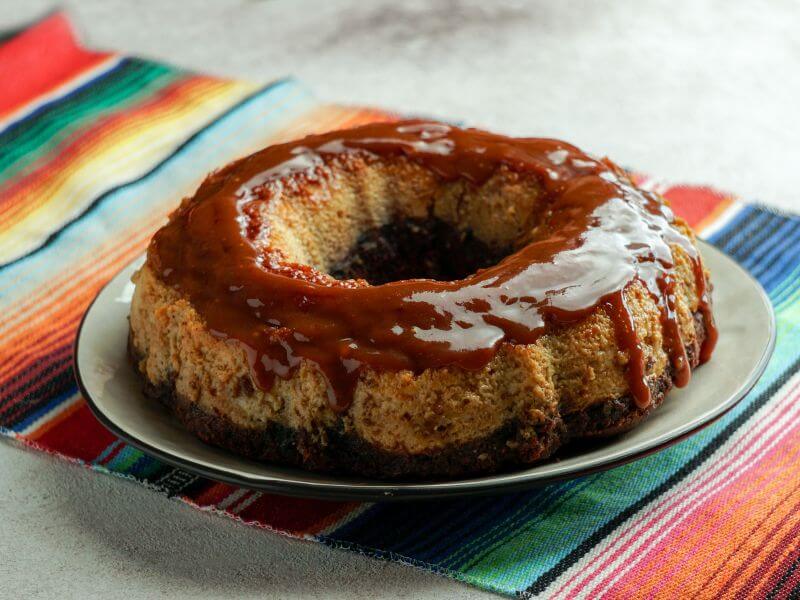 South American cuisine is a unique and delicious cultural experience due to the historical and geographic fusion of many ethnicities in the continent. The mixture includes a blend of Native American, Spanish, Portuguese, Italian, and Indian-South Asian food spread out across the land. Flan cake, locally known as Flancocho, is a popular Latino dessert that is another blend of two desserts in one.

The combination of flan and cake might seem like a strange idea to some, but it is a must-try for all lovers of desserts. The moist cake crumbs melding with the sweet creaminess of flan will truly delight your tastebuds. The dessert is perfect for any occasion and can easily be made with just a few ingredients. It is half flan, half cake but fully delicious. Today I bring you the recipe for this special sweet treat! 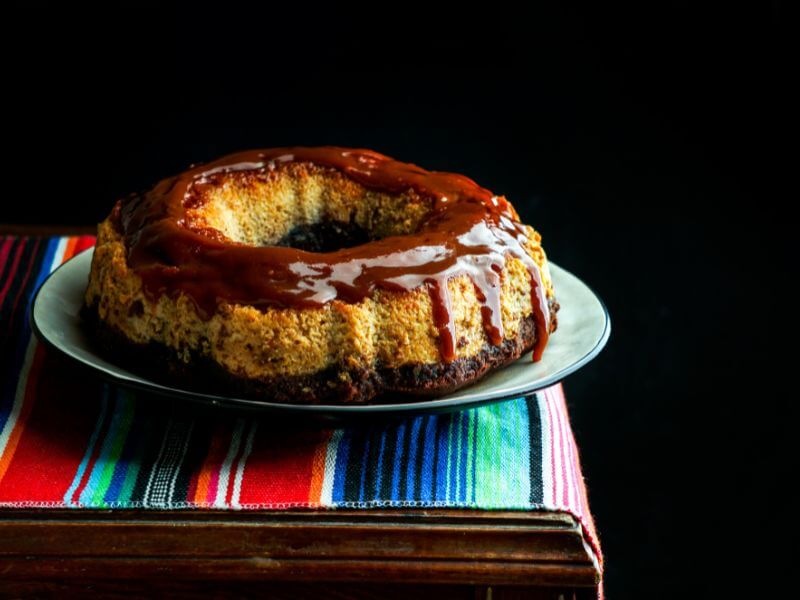 Flancocho, or chocoflan is a decadent dessert from Puerto Rico. It is popular in South America and in Mexico. The cake is a cross between bizcocho (word for ‘cake’ whose meaning varies across Spanish-speaking regions) and flan.

It is a fun cake that is very fun to make as it ‘magically’ does a trick in the oven wherein the solid part of the cake rises to the top despite being set at the bottom – leaving the flan under it.

Being extremely hard to make due to its nature, wherein you have to be sure of the time and procedure while baking, it has also been dubbed the ‘impossible cake’. However, it is a favorite in many countries and also a traditional household recipe. 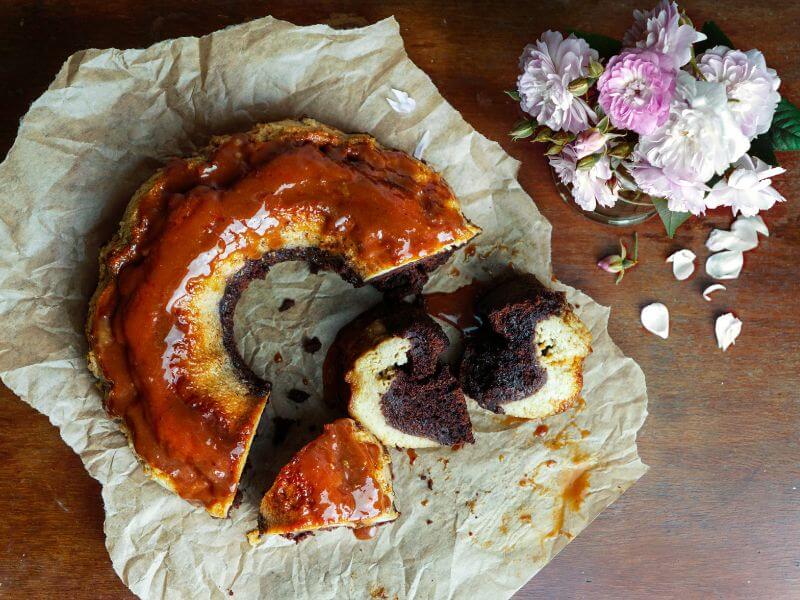 When talking about the history of Flancocho, we must remember what makes it unique – the unique blend of flan with cake. Flan is the most prominent part of the dessert and Flancocho is its variant. It is also one of the world’s most traveled foods – which means that its popularity made it go from Rome to Puerto Rico, where Flancocho was invented!

It is believed that Romans, being the first people who domesticated chickens, had an egg surplus, and hence proceeded to create as many unique recipes as they could using them. Flan was originally a savory dish and included flavors like eel sprinkled with paper. It was the addition of honey, its first sweetener that made the dish so popular.

Flan is a popular dish all over the world, and it is especially loved by Mexicans and Puerto Ricans who invented the flancocho. Latinos, being extremely home-based and traditional people, love the dessert as it is associated with home-cooking. It is also to be noted that the components of making flan there have been the same as they have for centuries!

Hence, Flancocho – a very homely mix of two beloved desserts was created. It is precious and unique to Puerto Ricans as it is very different from a regular flan cake whose components and procedures are completely different. Flan cakes first originated in the Philippines and are made like a normal cake, but Flancocho requires the extra care and the ‘magic’ step that makes it special.

There is also an Arabic version of Flancocho called kodrit kadir. 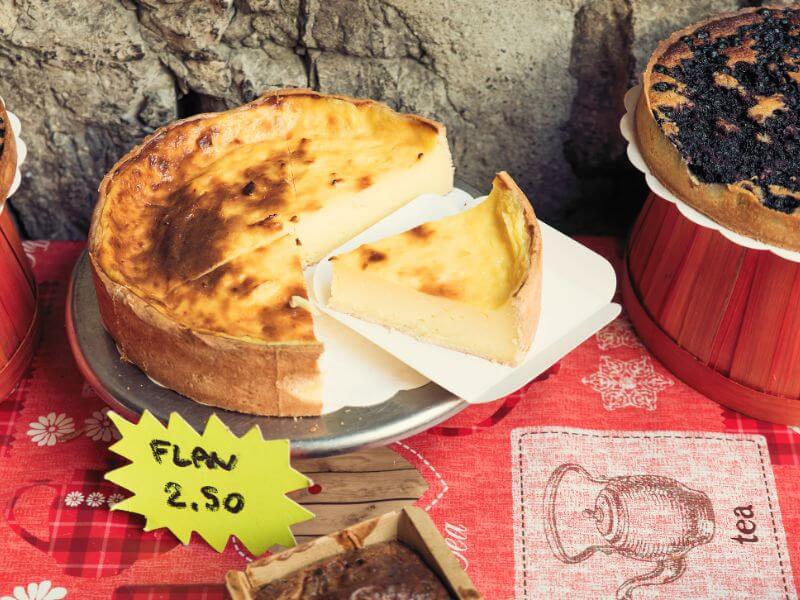 Flan is a sweet custard dessert and is a component of flancocho, but is not the same as it. Using the sweet creaminess of the flan and combining it with cake is what gives you a flancocho.

Flan can be easily made with a simple five ingredients just by the process of steaming the batter. Flancocho is more complex with cake also being one of its ingredients and has to use up a lot of complicated steps to achieve it. They also differ a lot in texture as flans are softer and more jelly-like.

Flan’s origins can be traced back to Rome. It was first a savory dish that was usually served along with meat or fish. It was popularized when a chef faded honey to create a sweeter version of the original and it took the world by storm. Now it has a lot of versions of it.

Meanwhile, flancocho is a Latino dish with its origins being traced to Puerto Rico. It is a traditional dessert there. The idea of  ‘flan cake’ however, originally comes from the Philippines.

Another way of cooking your flancocho is to make it into a Flancocho de Queso. This is actually the traditional variation of flancocho which literally means Cheese Flancocho and tastes amazing.

To turn your flancocho into a flancocho de queso, the only additional ingredient you need apart from the ones mentioned in the recipe is around 8 ounces of cream cheese.

When making the batter for the flan part of the flancocho (mixture of the condensed and evaporated milk with other ingredients), simply add the cream cheese while blending. 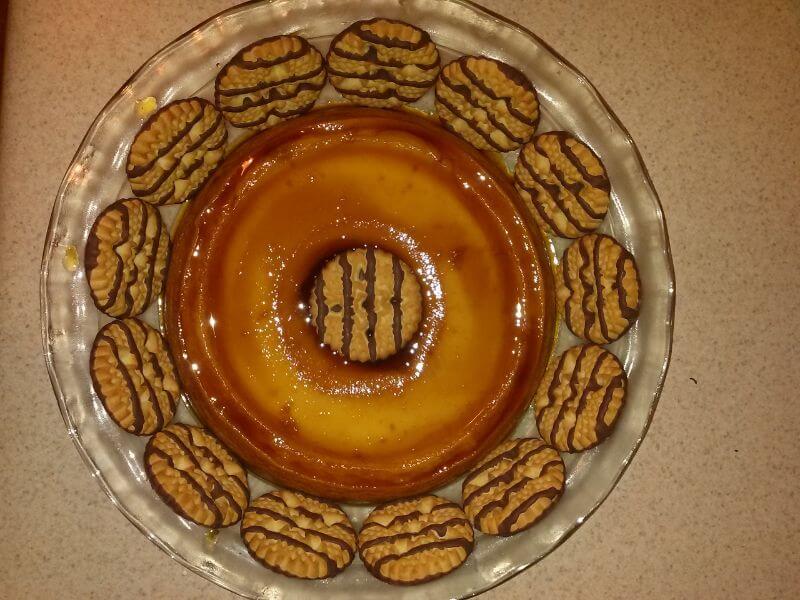 This recipe for flancocho can be a tricky one as it is not one of the simplest cakes to make, being a mixture of two. Not surprisingly, it has also been labeled as the “torta cake’ which translates to ‘’impossible cake”, but we have a few tricks up our sleeves to make sure it is easy.

While the batter for the cake part of the flancocho and the caramel to our on it can also be made at home, it is advisable that one gets cake mix instead – both to save time and effort.

Voila! Your Flancocho is ready for serving with both flan and cake in every bite. Enjoy this tasty recipe on all sorts of special occasions.