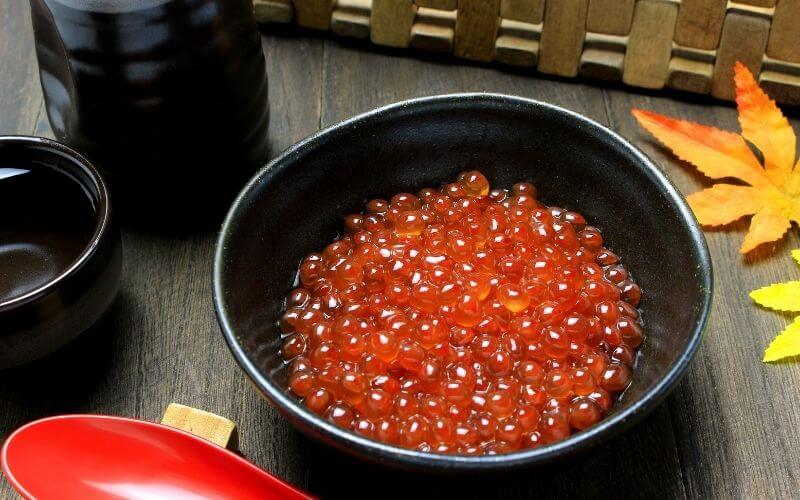 You’ve probably eaten salmon before, but have you tried its eggs? Salmon roe is also a delicious, versatile, and healthy food. In this article, you’ll learn more about its different varieties, popular preparation methods, and health benefits.

What is Salmon Roe?

Roe refers to the fully ripe fish eggs (as well as some other marine animals, such as sea urchins, squid, shrimp, and crabs). It can be found internally in females ovaries or released externally into the ocean. Sometimes roe also refers to the semen of males. Salmon roe is also called red roe.

Often, the terms “caviar” and “roe” are used interchangeably. (Caviar is also a type of roe, but it is generally sold cured with salt and stored in tins to age. It only comes from a specific type of fish called sturgeon, sometimes known as “black roe”, and is much more expensive than salmon roe.)

Salmon are natively found in the Pacific and north Atlantic Oceans, although they have been introduced into many other environments to be raised for food. Farmed salmon are cheaper, but wild-caught are known for their flavor and higher Omega-3 count. Alaska and Canada’s Bristol Bay are key sources of wild salmon. Salmon roe is typically harvested each year in the summer, when the salmon spawn.

Salmon roe is a reddish-orange, transparent mass. It has a fresh, salty, and slightly “fishy” taste. It is consumed in some form in most cultures’ cuisines. Often, it is spread in a layer over buttered bread and served with sour cream, lemon, and onion for garnish.

It can also be used in small quantities as a condiment to top smoked fish canapés, seafood crepes, or sushi and as a flavor enhancer for pasta dishes, omelets, or seafood salads. In Native Alaskan cuisine, salmon roe were traditionally fermented, dried or frozen; however, freezing is the only recommended preservation method in modern times.

Freezing roe generally lowers its quality, but salmon roe have a slightly thicker membrane than other species of fish, which forms a protective barrier against oxidation, preserving the quality of the roe for a greater length of time. Salmon roe can be frozen for up to two months for optimal taste quality; after that, the fats mix with oxygen (oxidize), decreasing the flavor. 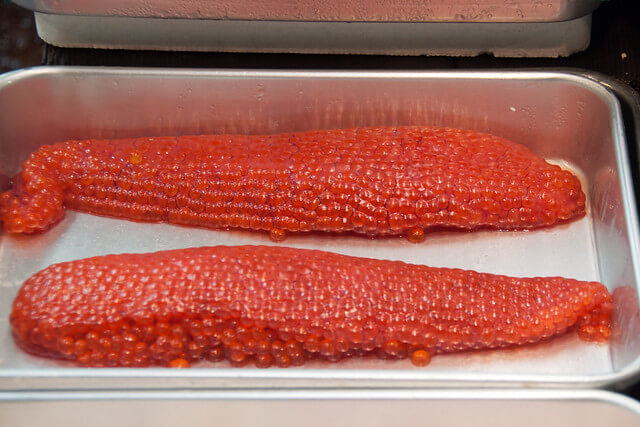 One specific type of roe is called Ikra (in Russian) or Ikura (in Japanese). This is popular in Russian and Japanese cuisine. These eggs are larger than the roe of other fish species and burst open when bitten into. This may sound odd and is often thought of as an “acquired taste” (most consumers of it grow to love the taste, but not until after eating it at least a few times).

In Japan, Ikura is served raw with soy sauce, or made into sushi.

Another type of salmon roe is called Sujiko. This is an entire egg sac (in English, called a skein) found inside the salmon ovaries which is often extracted because the ovaries are tough and not very palatable. A single egg sac weighs about 500 grams or one pound. Preserved with salt, it has a longer shelf life than Ikura.

Sockeye are highly sought for their small grain (egg diameter), 2-3 mm. This is the smallest grain size among the salmon species. Pink Salmon have a medium size grain with an average diameter of 7 mm. King and Coho have a larger grain. Chum, meanwhile, have the largest grain, at 9 mm.

The color and taste also vary among the different salmon species: Chum have a light orange color, and along with King, a slightly richer taste. Pink salmon have a faintly sweet favor and are, contrary to their name, orangish in color. Sockeye are a dark red color and said to have a more bitter taste.  Coho and King salmon roe are a dark reddish-pink with a mild flavor. 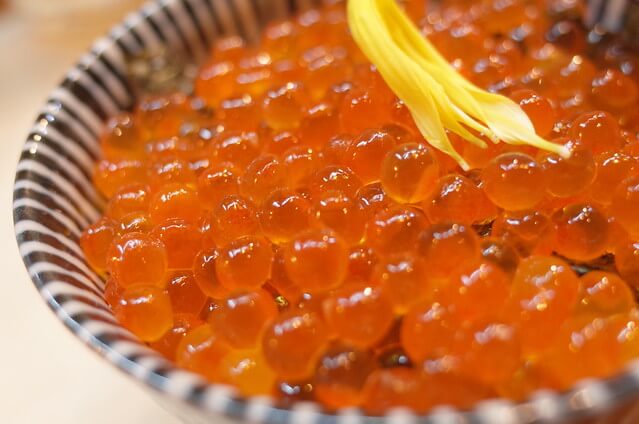 One popular way to prepare salmon roe is in sushi. To make salmon roe sushi, the individual eggs are separated and fermented in soy sauce and rice wine. The fermentation removes the strong “fishy” flavor and makes the roe’s texture smoother and lighter. Often cucumber and other “bland” ingredients are added when the roe is put into the sushi roll to balance its taste, which some may still find too strong.

Wasabi can also be added to neutralize the roe’s sweet, rich taste with a sharp, spicy one. If you want to make your own sushi, you can find lots of recipes online to choose from, or adapt your favorite sushi recipe to include salmon roe. 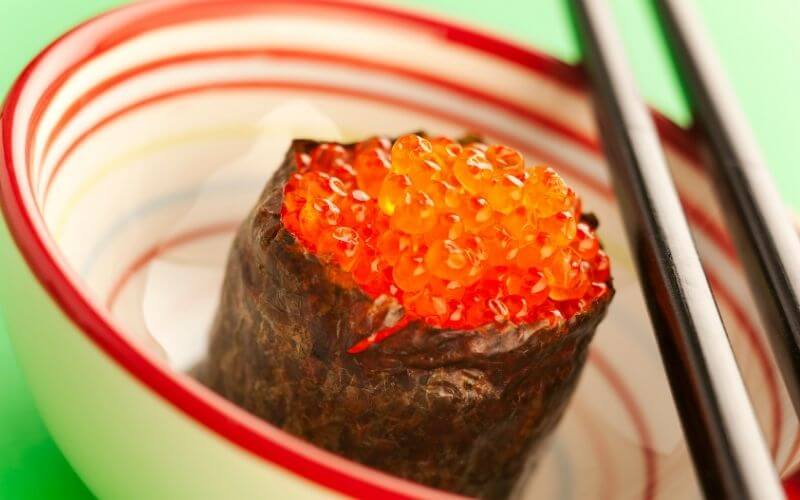 It also contains the nutrients selenium (helps protect against cancer, heart disease, and mental decline, as well as relieve asthma) thiamine (good for heart, nerve, and muscle function), and folate (important in energy production and supporting the immune system).

The eggs are 30% protein and contain a lot of omega-3 fatty acids, which are essential for brain health.  Salmon roe is also considered lower in mercury content and therefore safer to eat than some other species of fish such as swordfish and albacore tuna.

Check the production and expiration dates to see if the roe is from the current or most recent season (roe is harvested each year in the summer, between May and September). Most boxes have a transparent plastic vacuum and lid, which allows the consumer to check for frost. 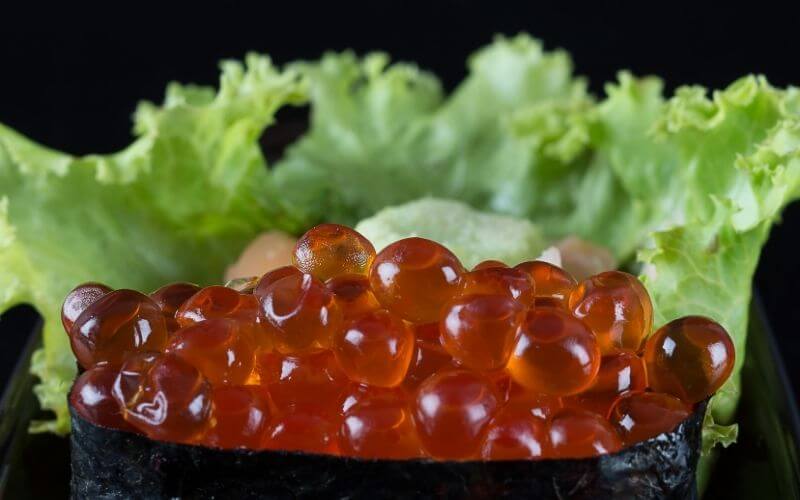 A lot of frost on the inside of the packaging can be a sign that the roe is not fresh or was not maintained at the recommended temperature, since roe is frozen at a temperature too low for ice crystals to form.

It will also maintain that low temperature in industrial cold storage; however, if it is placed in a conventional freezer, or thawed and re-frozen in one, it will form frost quickly.

So no frost (or some on only the outside of the package) actually means that your roe has been kept at an optimal temperature and should still be fairly fresh. The eggs should have a clear color and a mild fishy flavor. Salmon roe should be slightly oily but not greasy. Additionally, you should steer clear of any product claiming to be wild Atlantic salmon, as all Atlantic salmon are farm-raised.

It also can be found packaged in small tins or jars. Again, you should check the packaging carefully. It should specify the fish species which the roe is from. There are other species of fish that will yield red roe, so if you want salmon roe, make sure the packaging says it is from salmon specifically.

You should be aware that by law and for consumer safety, the roe in these tins has been processed with a lot of salt for preservation (since roe will spoil within a month of thawing) and therefore is not totally “fresh”. The tins also may not show a “harvest” or “sell by” date. Any processed roe will have a longer shelf life than frozen, but will also tend to have a very salty taste.

You can also prepare your own roe if you catch a female salmon with her eggs intact. Carefully remove the entire egg sac and pack it in a plastic bag with ice. Remove as much air from the package as possible and store it in the freezer for up to two months. If you want the roe to last longer, you can add salt to make your own caviar.

Use kosher salt, not iodized, and be sure to mix the salt with warm 38-46°C (100-115° F) water to make a brine. Let the skein sit in this brine for 30 minutes.  Its color will change to a cloudy orange color. Carefully wash the skein in the brine to remove the membrane, and remove the membrane from between individual eggs as well.

Rinse the eggs a few times to make sure any remaining membrane bits are gone. Put the eggs back into the reserved salt brine; they will turn clear again. The eggs can be put into a clear glass jar and kept refrigerated for one to two weeks. The jar can be put inside a bowl of ice to make the caviar last longer. Don’t freeze the caviar though, as this will ruin the flavor. 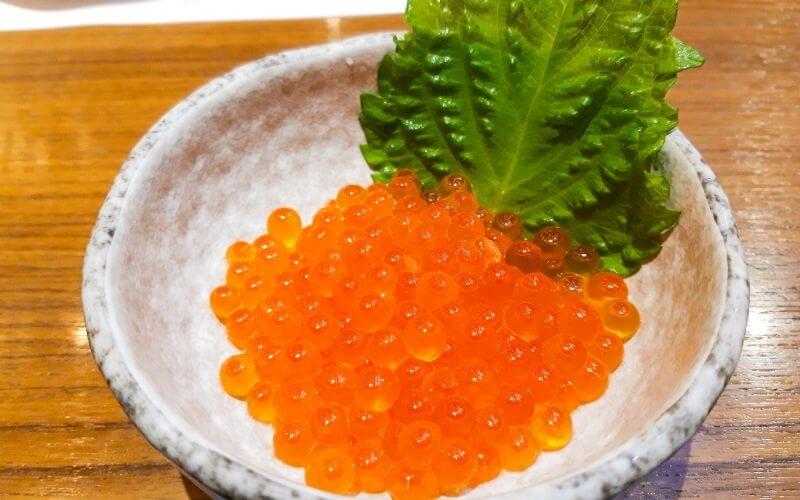 Salmon roe is a delicious food that can be prepared in many dishes. It has a long culinary history, a strong fan base, and high nutritious value. Now that you know more about what it is, we hope you will feel confident buying it for your own consumption, or ordering it in a restaurant.

Other Popular Articles About Traditional and Authentic Japanese Cuisine

6 thoughts on “Salmon Roe – What it is, Varieties, How to eat it and Nutrition.”