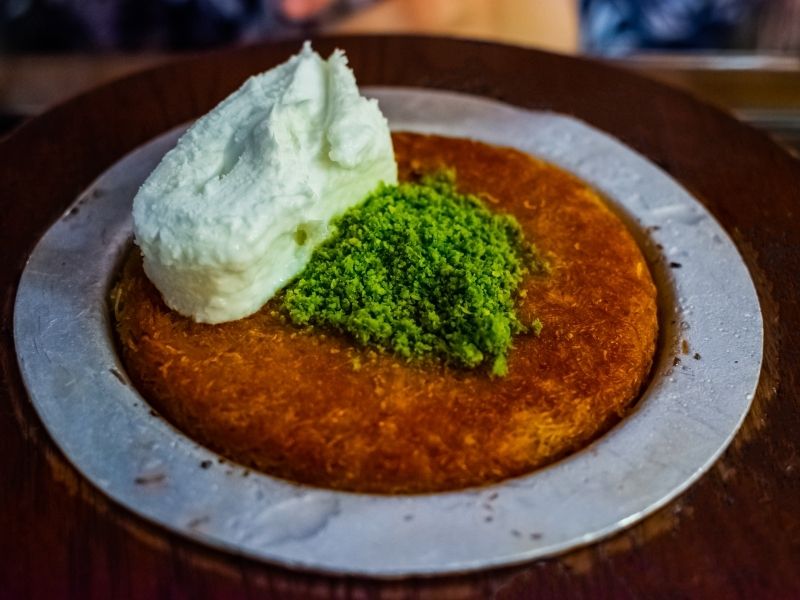 If you’re a fan of trying out different meals or dishes, then you have probably tried out a few Middle Eastern ones. If you haven’t then you might want to try out this sweet one. The kanafeh.

It’s a dish that’s been around for centuries and has managed to maintain its popularity in different Arabic countries and is part of the rich and diverse cultures of the regions in which it is prepared.

There are actually many places that its origin could be attributed to but despite the stories, one thing’s for sure, kanafeh is a rich delicacy that is been around for some time.

In this article, i tell you more about what the popular kanafeh dish is,  its origin, the ingredients used in the preparation process, the varieties in which it exists and an easy-to-follow recipe in case you would like to make it by yourself at home. 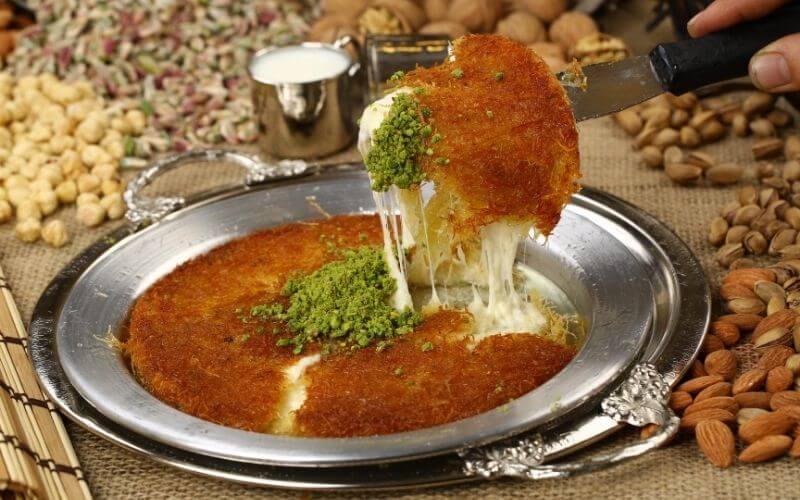 Kanafeh refers to a traditional delicacy from the Middle Eastern region, more of a dessert that’s made by incorporating thin pastry that’s noodle-like. Alternatively, it can be made with some semolina dough that’s fine and soaked in very tasty sugar-based syrup and is then layered with some cheese.

It can also be layered with many other ingredients such as nuts or clotted cream but generally, the choice of layering varies with the region where the Kanafeh is being prepared.

Kanafeh is very popular in the Arab regions of the world especially the Levant, Egypt and among the Palestinians. Different variations can be found in Greece, Turkey, the Balkans and South Caucasus.

While in the Balkans, you will find the people calling the shredded dough “Kadaif” and while in Greece they refer to it as “kataifi” and it serves as the base for many different dishes that are rolled or layered with it such as pastries, nuts and sweet syrups.

One of the most popular kanafeh preparations is the knafeh nabulsiyeh that has its origin in the Palestinian city of Nablus and is the country’s most iconic dessert. It uses white-brine cheese that’s known as Nabulsi, but where did Kanafeh really originate from?

Kanafeh has been around for many centuries and is very popular among many countries which is why it’s not easy to trace its exact origin. It’s very much loved in Lebanon, Israel, Algeria, Egypt and Turkey but a lot of people including culinary experts strongly believe that it has its origin in Syria.

According to many stories and legends, Kanafeh was invented in the Syrian city of Damascus sometime in the 7th century by Muawiyah l, Umayyad Dynasty’s first caliph. It’s said that he’d usually ask his cook to make a dish that was great or rich enough for the Ramadan fasting period.

Some traces of an ancient version of this dish are in the 13th century medieval Andalucian cookbook that’s titled Kitab-al-Tabikh. One of the many recipes found in the book is the kunafa that’s all about a thin crepe stuffed with some fresh cheese after which it’s baked and some honey and rose water syrup is drizzled over it.

The name of the dish can be written in a number of ways depending on the country. Examples include knafeh, konafa, kunefe,kenafe,knefeh, and kunafa. The root of the word comes from “kanaf” an Arabic word that means to shelter or to protect. This word was probably chosen in reference to the two layers of dough which have cheese in between.

Despite this dish originating from Syria, Nablus in Palestine is the place often referred to as the cradle of the kanafeh. This dish holds a special place in the lives of the people that eat it.

It has a lot of salient roles among the people, for example, it’s a symbol of goodwill after a conflict has been resolved, it is prepared during moments of sadness and grief like when somebody dies, and it’s also prepared during happier times as a sign of admiration when somebody achieves or reaches an important milestone. 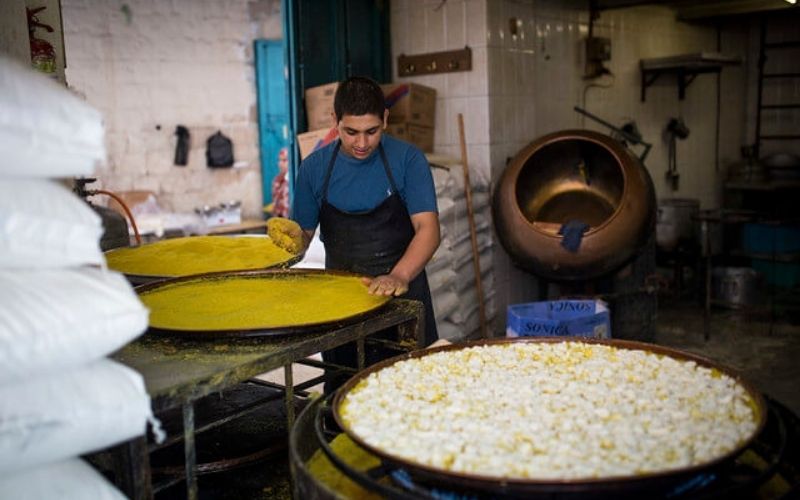 Since kanafeh has been around for many years, its original recipe has been welcomed by so many people who have found ways of transforming it, something that has created different variations of the dish. Today, several versions of this dessert exist depending on the region or the country you find yourself in or even the different bakeries that make and serve this very beloved dessert.

In Lebanon, this dessert is referred to as knefeh-bi-jibn.

Its ingredients are wheat semolina and mozzarella that’s been bathed in syrup with an orange blossom kind of flavor. In Lebanon, it’s very common to eat kanafeh for breakfast alongside sesame seed kaakeh which is a traditional style bread roll.

In Turkey, the dish is called kunefe. Is considered one of the most popular sweets in Turkish Food.

There, it’s a candy baked in individual small-size metallic molds. The recipe uses dil peyniri (a particular turkish cheese) as part of its ingredients instead of akkawi (a palestinian cheese). Dil peyniri is a Turkish cheese that is made using stringy and unsalted sheep and cow milk. The Turkish people like to have kunefeh with some whipped cream known as kayamak.

In Jordan, the dish is known as kanafa.

It is made from a mixture of ricotta and mozzarella that gives the dessert a nice, creamy and melting texture. The people in Jordan like to then spread a mixture of almonds, nuts and raisins on top. 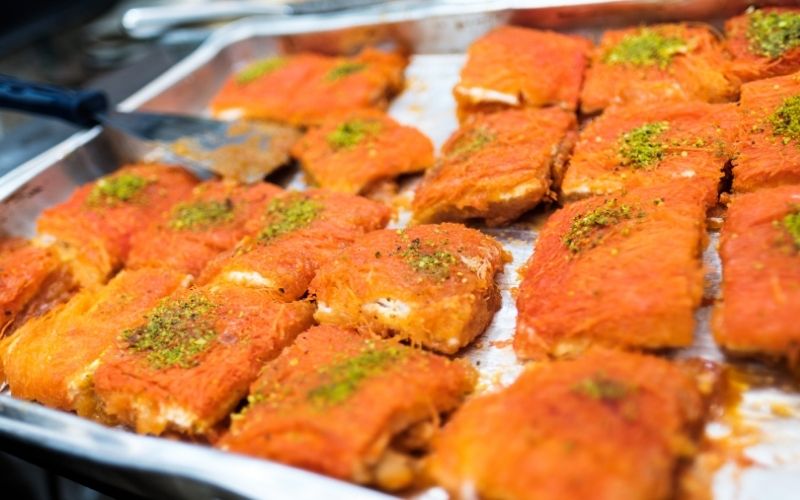 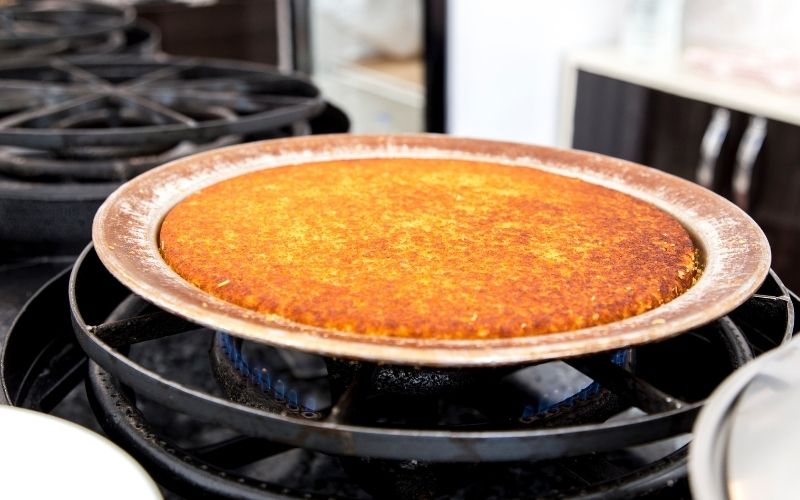 Till date, kanafeh is eaten in so many households and having it is mostly a weekly tradition. Many like to eat it while playing a fun game of cards, exchanging some jokes, smoking hookah and enjoying the company of both friends and family.

A fun fact about this delicious dish is that in 2009, a Palestinian baker decided to go more than the extra mile in the preparation of kanafeh. The pastry baker from Nablus baked the world’s biggest kanafeh that got him into the Guinness World Record book. This kanafeh was 74 metres long by 1.05 metres wide.

The weight of this kanafeh was a record 1,756 kilograms. This kanafeh was made with about 600 kilograms of cheese, 40 kilograms of pistachios and 300 kilograms of sugar. The Palestinian pastry baker obviously needed help in the creation of such a masterpiece, which he got from 170 other bakers from a variety of kanafeh shops. If you’re wondering about the cost of preparation, it was $15,000.

That said, it can be strongly concluded that kanafeh is one of those traditional desserts with the power to excite whoever gets a taste of it. It doesn’t matter what their social status, religion or age is, it’s all about sharing an experience.  Every single serving of kanafeh is a celebration of life, love and unity.

Kishka – The Sausage Enjoyed by European and Eastern Countries.

7 thoughts on “Kanafeh – Origin, History and Curiosities. [with Lebanese Recipe]”